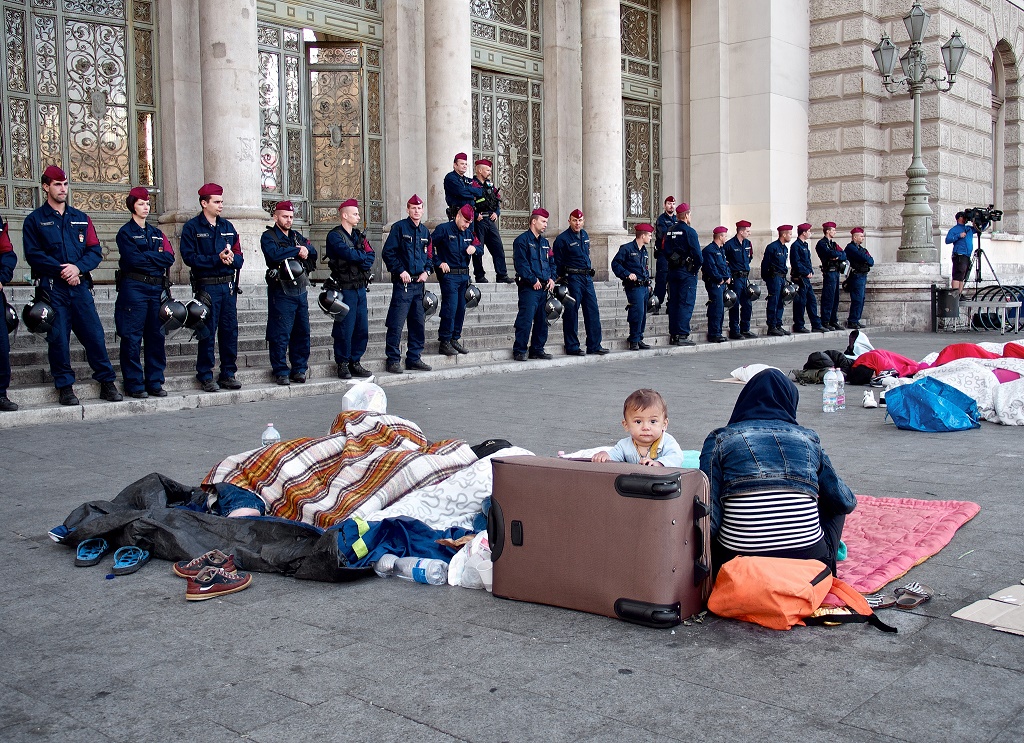 Europe remains as divided as ever as thousands of refugees continue to brave dangerous sea crossings, riot police and border fences in a bid to seek a safe haven inside the European Union.

Even as summer passes to fall, the numbers of people on the move have not slowed as European member states continue to grapple with how to respond to this mounting humanitarian crisis. FSRN’s Jacob Resneck reports.

Hungarian soldiers, prisoners and contractors hastily pressed into service this week are now erecting a 25-mile temporary barrier along the border with Croatia, as shown by local television reports.That’s after having already completed a 110-mile fence along the country’s border with Serbia.

To bypass the militarized border with Serbia, tens of thousands of refugees – many of them Syrians, Iraqis and Afghans – have now streamed into neighboring Croatia. Croatian authorities say 35,000 people have crossed the border from Serbia in the past week alone. Television cameras carried the sights and sounds of a hastily erected registration camp on the border.

Confusion reigns as authorities struggle to deal with the huge number of people seeking entry into the European Union. One unnamed man interviewed by Chinese broadcaster CCTV sways on his feet, weak from exhaustion. “I’ve been here since 3 o’clock yesterday,” he says. “I didn’t sleep, I swear, for two days I’ve not slept. I’ve just been walking, and now I’m here, I still haven’t slept.”

Earlier this week, the European Commission, the executive arm of the EU, approved a plan to resettle 120,000 refugees across the whole bloc, despite strong opposition from some of its eastern European members. Heavyweights France and Germany persuaded a majority of member states to approve the quota system over the objections of Hungary, Romania, Czech Republic and Slovakia.

It’s unclear at this point how the EU would force a member state to take in refugees. Slovakia’s prime minister vowed Wednesday to prevent refugees from being resettled on his country’s territory.

The plan will also likely meet resistance from many of the refugees themselves, as virtually none have a desire to resettle in the poorer countries in eastern and central Europe. But something will have to be done. Nearly half a million people fleeing war and poverty in the Middle East, Africa and Asia have arrived in Europe this year to date.

The Organization for Security and Cooperation in Europe projects as many as 1 million people could apply for asylum here this year. But the OSCE’s Secretary General Angel Gurria says that’s no reason to panic as long as refugees are resettled in an organized fashion.

Germany has so far been the most willing to accept refugees with its leadership pointing out that many who are fleeing the Syrian civil war are skilled, young people and motivated to join the work force at a time when much of Europe’s population is aging. But there are cracks forming within Germany’s center-right government.

On Wednesday, a right-wing German political party that’s a key part of Germany’s ruling coalition government hosted Hungary’s controversial right-wing prime minister. And on Monday, Germany’s interior minister Thomas de Maizierie proposed a Europe-wide cap on refugees. He said Europe cannot take in all migrants from all over the world who think their economic future lies in Europe.

“That’s why I am proposing that we agree on quotas in Europe, generous quotas, where we take in migrants from crisis regions to Europe – without traffickers profiting from it – make it legal, and help distribute them in Europe,” says Maizierie.

European leaders are meeting again this week to try and find common cause. The European Commission’s President Donald Tusk told reporters Wednesday that in-fighting has to end.

“A concrete plan must finally appear in place of the arguments and the chaos we have witnessed in the last weeks,” Tusk says.

But whether national leaders will be able to overcome fears of a xenophobic backlash to agree on a joint plan is unclear. What is clear is that common plan or no, people continue to seek refuge, and most are here to stay.