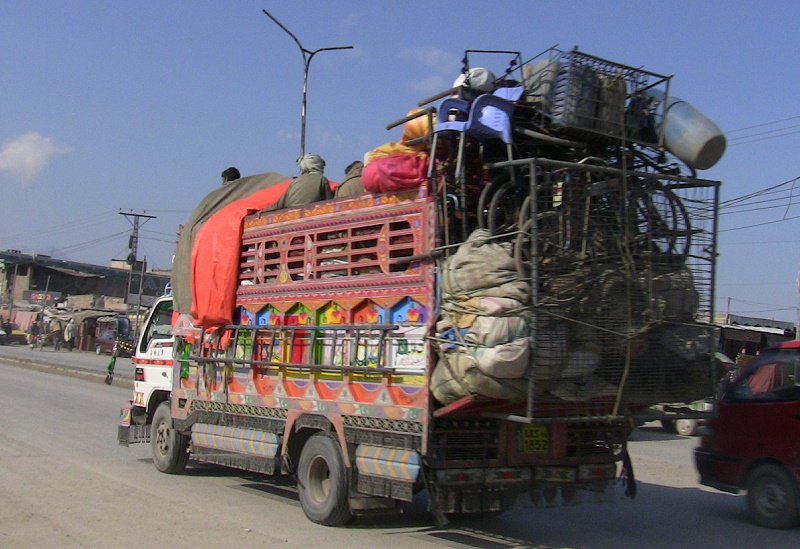 Rukhzana Khan's family travels to Afghanistan on a truck loaded with all their belongings after Pakistan orders the forced repatriation of Afghans. (Photo Credit: Gabe Matthews)

Pakistan hosts one of the largest refugee populations in the world, and more than 1.5 million of those refugees are from neighboring Afghanistan. Many refugees first arrived decades ago during the Soviet invasion of Afghanistan, and young generations of those families were born on Pakistani soil. But soon after the December attack on the Army Public School in Peshawar, in which the Tehrik-i-Taliban killed more than 130 students, refugee families were told to leave the country. This week, officials in one region known as Azad Kashmir announced they plan to expel 11,000 undocumented Afghans. FSRN’s Gabe Matthews recently accompanied one family on their journey back to a country they fled thirty years ago.

Rukhsana Naz’s newborn baby cries incessantly as his family packs up a truck to return to Afghanistan; a country they left 30 years ago. Naz, who is still recovering from childbirth, worries about what awaits.

“I am worried only because in Afghanistan there is no electricity and water and women bring water from far away,” says Naz. “I’m not like other Afghan women who can haul water while wearing a burqa. I can’t carry water on my head. Besides, I am worried for my children and their future.”

Other members of the family load up the last of their belonging from the house. Muhammad Sadiq, the newborn’s father, is sad to leave and about the situation provoking their departure.

“Police slapped me around yesterday and asked me to pay them $100 U.S. dollars,” Sadiq says. “I am poor and haven’t worked for the past month-and-a-half. So how I can pay them that amount? My children are young and have no other source of income. I can’t pay police bribes so I decided to leave Pakistan. The last forty days have been the worst of my life here.”

Sadiq and three of his cousins rented a truck for about $600 dollars. They lived together in four room rented house for over 30 years. Now it’s time to leave Pakistan together.

Rafi Ullah is Sadiq’s cousin. He is angry because he had to sell his wife’s jewelry to pay for the truck to relocate his family to Afghanistan.

Ten-year-old Sabeela Khan has been sitting sullenly for hours during the trip. She says she misses her school and her teacher and doesn’t know if she’ll be able to continue her education in Afghanistan. Like 21 other members of her family, Sabeela was born in Pakistan but doesn’t have Pakistani nationality because she was born to refugees.

Refugee families on their way back to Afghanistan are easy prey for corrupt police officials who request bribes in exchange for swift passage through checkpoints along the highway.

Haji Hayat is an elder of the Afghan refugee community in Khyber Pakhtunkhwa province near Afghan border. He says he wished the Pakistani government had given Afghan refugees until the summer to relocate instead of having to face homelessness during the harsh winter months.

Thousands of repatriated refugees arrived in Kabul as snow blanketed the ground. Many had no choice but to live in tents.

They also face severe economic challenges upon their arrival. According to World Bank statistics, 36 percent of Afghans live below the poverty line while 35 percent are unemployed. Repatriated refugees must also compete with internally displaced Afghans for housing and jobs.

Fifteen-year-old Yasin Khan is one of the lucky ones. He earns about $12 a day selling a snack called Manto on the streets of Jalalabad in the evenings after school.

“My family was afraid to return from Pakistan after 20 years there,” Khan explains. “I was born in Pakistan. We had concerns and fears, but life does not stop. We did not have too many problems adjusting to life here in our great Afghanistan. It is the people who can make Afghanistan as prosperous and great as it used to be. Or at least that’s what my mother always says before we go to sleep so we can forget all our fears and concerns.”

According to Afghan officials, at least 35 thousand former refugees have returned to Afghanistan from Pakistan since the start of the year.