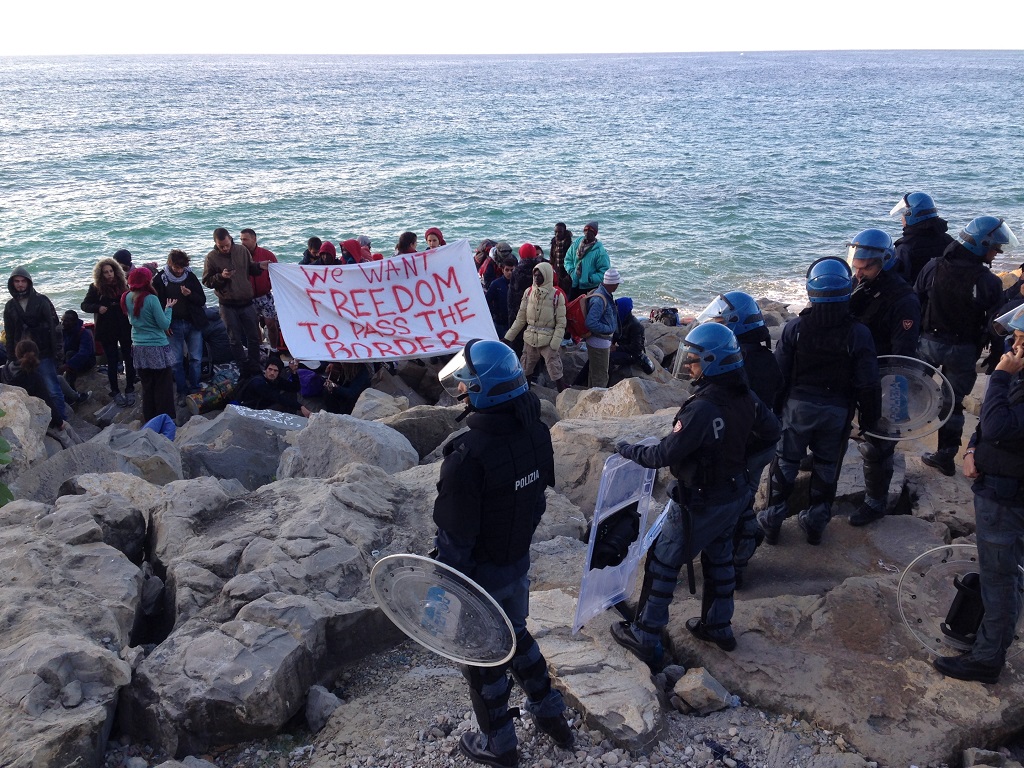 On Wednesday, Italian police cleared a refugee camp on the Mediterranean coast near the French border. About 100 people were currently living at the camp where officials say they were illegally occupying a public area using electricity and water without paying for it. Raphaël Krafft reports from Ventimiglia.

At dawn, about 200 anti-riot Italian police forced the mostly Sudanese refugees and their Italian supporters out of the encampment. They all moved to a nearby outcropping of rocks along the shoreline and refused to move.

“We are going to stay and resist on the rocks. We are really by the sea. It’s kind of a dangerous situation because these rocks are slippery and people could slip into the sea and we hope the police will not insist in pushing us toward the sea,” says Federico, who wishes to keep his last name unidentified. He’s an Italian activist supporting migrants and refugees in Ventimiglia.

The “Presidio No Border” camp was settled by activists in June when French officials clamped down on the French-Italian border to prevent migrants from entering the country. According to the Schengen Agreement, migrants should stay in the first European country they reach. Italy and Greece in southern Europe are the gateways to the continent for people across the Middle East and North Africa, fleeing war and poverty.

Before sunrise activists had fortified “Presidio No Border” to block police from evacuating the area and demolishing the camp. But when officers arrived at daybreak, Federico says along with the refugees, they moved to the rocks to avoid violent confrontation and arrest and the camp was bulldozed.

“Police already took all our tents, what we took to stay overnight even our food, our water and now they staring at us and waiting,” explains Frederico.

On any given day, the camp was a temporary home to as many as 250 people. Although French police check every car and train entering the country from Italy and expel any migrants they find, the turnover rate at “Presidio No Border” camp was rapid, indicating official efforts to stop entry were largely unsuccessful.

Like most refugees here, Bachir from Darfur is determined to continue his journey through France to Northern Europe.

“Now all my hope is to cross the border to go to England,” says Bachir.

“But did you see all the police around?” FSRN asks.

“Yes I see all the police around,” replies Bachir. “But I don’t fear the police because we are protesting peacefully. We are not going to use violence or something like that.”

“We are not going to intervene in the middle of the rocks,” says Maggese. “I don’t what we are going to do, but we are certainly going to wait.”

While they waited, officials blocked all access to the rocks, preventing journalists from conducting interviews and NGOs from providing humanitarian assistance, though they did allow water distribution. Advocates say this was intended to force an end to the standoff.

Anne de Botton is a volunteer for the French medical NGO Médecins du Monde. When the camp was established in June, de Botton helped provide assistance to the refugees.

“I believe if the situation lasts for long, we would do what we did in June, provide food and water if, of course, the police allow us to do so,” explains de Botton. “At this very moment, the NGO I belong to has been forbidden the access to the rocks.”

Late in the afternoon Antonio Suetta, Bishop of Ventimiglia and San Rémo negotiated an agreement between police and refugee advocates, ensuring that they would not be barred from Ventimiglia city, however they will face charges of illegal occupation of a public space. After hours in the hot sun and without food, the refugees and their supporters surrendered. The migrants were transported to a nearby refugee center where officials say they will be provided food and shelter.

But most will likely return to the roads, like the hundreds of thousands of others migrating towards Northern Europe seeking safety and security for their families.