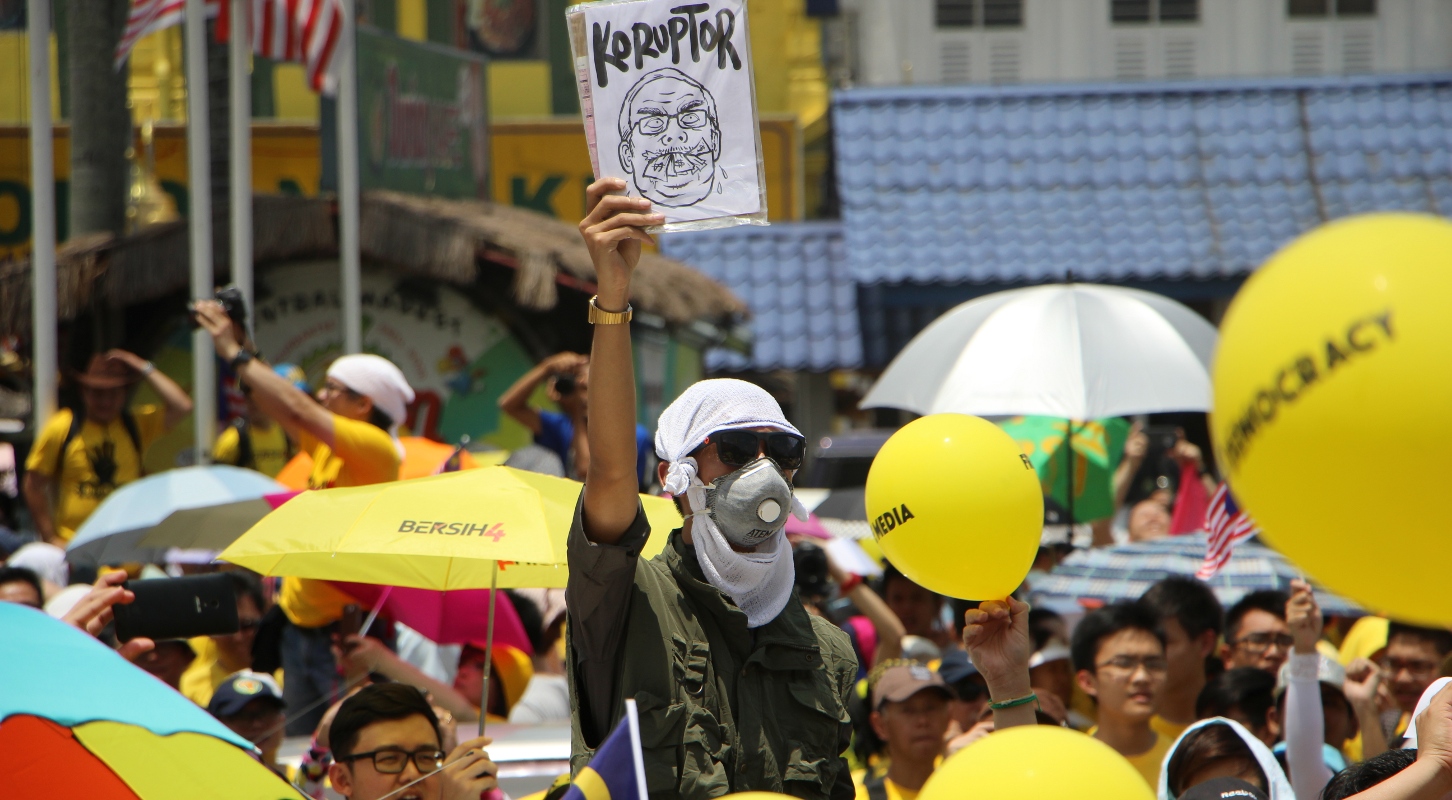 More than 1,000 anti-corruption advocates are in Malaysia, attending a summit convened by Transparency International. Malaysia’s prime minister was scheduled to deliver the keynote address today – but he didn’t show up. Najib Razak has come under substantial fire following recent reports that $700 million dollars of state money made its way into his personal bank account.

The allegations of financial misappropriation were front and center at a huge pro-democracy rally in Kuala Lumpur last weekend. Malaysia hasn’t had a change of government since independence in 1957. The two-day rally ended on the eve of the country’s Independence Day, which marked the 58th year of the current government’s uninterrupted rule. Jarni Blakkerly was at the rally at reports that the demand for free and fair elections is growing.

The soundtrack to the growing Malaysian pro-democracy movement is a song by a group of young Malay musicians, whose band is called Bandsart. Named after the inner Kuala Lumpur suburb where they grew up, Bangsar, the band’s members are all friends and activists who have been playing together for about four years.

“Music by itself is an aspect of everything,” says lead singer Amir Abdul Hadi. “It’s in the movies, in the radio, in the media. But music by itself, it won’t change things. But music will bring all these people together, and help in the change.”

The band performed as part of a weekend mass protest, where according to independent media sources about 100,000 people took to the streets in one of the biggest rallies for democratic change Malaysia has seen in recent years. The protest was organized by a non-governmental organization called Bersih – which means Clean. It’s the fourth rally they have held since 2007 calling for free and fair elections.

The event spanned two days. The night before it began, authorities banned the rally shirt — yellow t-shirts printed with the word Bersih. Many wore it anyway, and came prepared with masks and salt in case of tear-gas. Bagsat singer Amir says that playing music at the protest also has its risks; at the last rally police confiscated their drums.

“Fighting for this cause is a risk we are willing to take. We have been arrested many times, its pretty much become a norm. Everyone has been arrested at least once, I’ve been arrested twice, and Adam Adli is the most – about ten times.”

This most recent Bersih protest was called about a month ago, in the wake of damning corruption allegations involving the prime minister, Najib Abdul Razak. In July, the Wall Street Journal published reports that $700 million, linked to a failing Malaysian state investment fund, was deposited into Najib’s private bank account. Najib initially denied the allegations, but later admitted the money had in fact gone into his account. He insisted the funds were not embezzled, but rather was a political donation from an unnamed Middle Eastern source.

Despite some criticism even within his own party, Najib has maintained his grip on power.

“It is not wrong to receive donation, and to me it is more transparent to put it in the bank than to accept cash,” said  Tourism and Culture Minister Nazri Aziz, denying Prime Minister Najib did anything wrong in accepting the money. “We do not have a law in this country on how political parties collect their funds. The only thing that needs to be done under the Anti-Money Laundering Act is to trace the source of the money, as long as Najib is not raising it from Mafia or from any underground agent, it’s okay.”

And, according to Nazri, ordinary Malaysians shouldn’t be concerned.

“It’s for the authorities to know where the money is coming from,” Nazri says. “It’s for them to check, not for the people to know.”

But the tens of thousands in the streets disagree. Many are angry at the alleged corruption, and also at the rising cost of living and the falling Malaysian Ringgit.

James came down to the protest with his two sons and three of his nephews, all wearing the banned yellow shirts.

“The other ones before were just for clean elections, this is more to do with the country,” says James, who is proud to bring the next generation with him to this protest. “Not just for elections but for clean government, right to protest. Because we feel shackled to a certain degree. Today wearing this shirt is against the law, according to the Printing and Publications Act. I mean you can’t dictate what we wear; we have to show them we have a voice.”

Throughout the afternoon the crowds swelled as more and more people joined the demonstrations. Through the jam-packed narrow streets, where thousands elbow each other for space to breathe, the drums and songs of Bandsart fired up the crowd. As night fell, a festival atmosphere merged. Thousands of protesters spent the night sleeping on the streets. Police banned tents at the event, so protesters made do with thin sleeping mats or less.

Just after midnight speeches, Ong and three of his friends stretched out thin paper bags to use as a bed, and rested their heads directly on the curb. He said he decided to sleep on the street, “to save my country, seriously.”

In a show of patriotism, rather than a reprise of Bandsart pro-democracy anthem, the rally closed with a different song, the national anthem, Negaraku. While it’s yet to be seen what, if anything, will come from the protests — the voices of the democracy movement in Malaysia were heard, loud and clear.