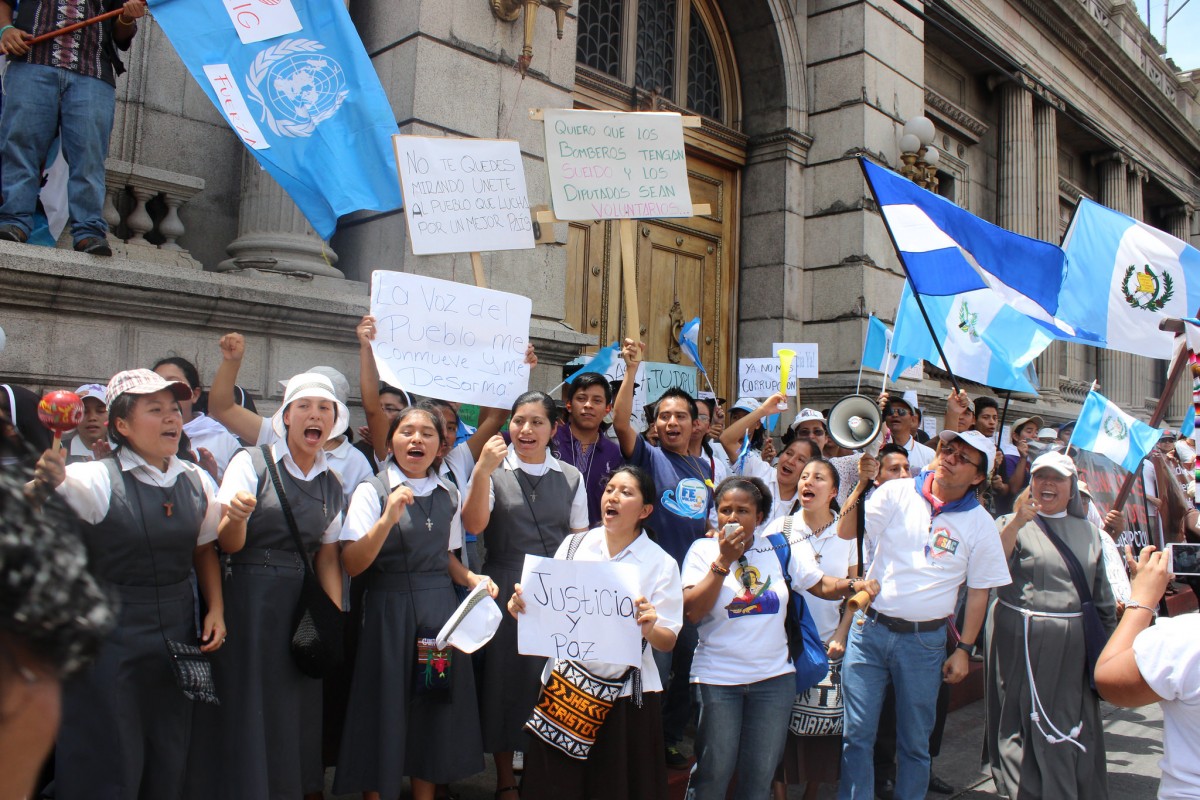 On Tuesday afternoon Guatemala’s Congress voted unanimously to strip President Otto Perez Molina of his immunity from prosecution. The move comes amid a massive corruption scandal that has already prompted several high-ranking officials within the Molina government to resign their posts. The corruption scandal erupted in April, implicating government officials in the theft of resources and revenue from agencies and state-run institutions. Protesters have been in the streets ever since demanding accountability. For more on the events in Guatemala, FSRN’s Shannon Young spoke with Guatemalan human rights activist, Claudia Samayoa.

FSRN: Let’s start with Tuesday’s vote to strip the president of immunity from prosecution. Just how significant is this in Guatemala?

Claudia Samayoa: Well, it’s very significant in Guatemala and most of the world because this is a process that most of our constitutions do have – it’s the impeachment in the United States, the stripping of immunity here in Guatemala and most Latin American countries – that is seldom used either because of impunity that is so high that it’s almost impossible to get some kind of denouncement against the president as far as to get the general prosecutor to act, or just because whenever the general attorneys act, you might have too much power in the place of the president.

So here in Guatemala, it’s never been heard of before, we have never had a legal and non-violent process to get rid of a president that is either corrupt or – in the case of Otto Perez Molina – it’s for corruption, but we’ve seen a very repressive regime. So it’s really a very good step. It was not an easy step. The Congress has been blocking and stopping all these attempts to get accountability and it has been because of the pressure of millions of Guatemalans that have been acting through social media, through public demonstrations, in the cities but also in the small villages. And how demonstrators have opened their mind and spoken out even in political rallies because we have elections on Sunday. And so, all of these opinions have gotten to the point to where politicians have decided that they either do this or they will lose a lot in the elections.

FSRN: As you mention, this is happening on the cusp of an election. Voters head to the polls on Sunday but protesters remain in the streets. Is there any candidate running that promises to deliver any significant change to the political system there?

CS: I think that what we have more of in the candidates is basically a lot of rhetoric. They are saying they will do changes, but they don’t say how or with what money they will deal with it, so we don’t have a clear-cut proposal. So people are very dubious that just electing will get us a new Guatemala.

There is a general understanding that elections won’t make the change. It’s going to be the pressure and the way the new government will deal with it.

People are even talking about boycotting the elections because major reforms were not done before this election. There are over 1,000 candidates that have pending trials against them. So, there is a general understanding that we are still electing the same mafia, just with different names and different posts.

FSRN: Let’s go back to the prosecutorial process there. Impunity has long been the norm in Guatemala, but now we’re seeing an entire slate of high-ranking officials falling as part of a corruption scandal. What happened? Where did these accountability mechanisms and the political will to prosecute come from?

CS: It actually has to do with the CICIG, the International Commission Against Impunity in Guatemala, that was created eight years ago. The CICIG was created to dismantle and destroy all the legal provisions the promoted the impunity of these mafia structures, the mafia structures that are embedded in the political arena and that either deal with organized crime or corruption.

It took CICIG many years and – the last few years, [former Guatemalan Attorney General] Claudia Paz y Paz – to start looking at these mafia structures. Fortunately for us Guatemalans, the new Attorney General Thelma Aldana understood that all the information that was coming from these investigations needed to be prosecuted and this was the time.

So there has been a process from the Attorney General’s office from the last six years, the goodwill of the new Attorney General, and CICIG that finally got the understanding of how the political system works.

We cannot say that we have won altogether, but what we have done right now is started the process. We will still have to see how courts of appeals and tribunals react to these very complex cases.

That is why you see the pressure from the people who have understood that it is not only a question of denouncing a person like Otto Perez Molina, it’s a question of following up on this case all the way to the sentencing and to the confirmation of the sentencing because impunity lawyers and impunity groups are just hidden all over the structure and they can destroy years of work. I think that the another thing you have to understand about Guatemala is that you have now an understanding from the people that this is not just ‘ok, they stripped immunity, we can go home.’ No. People are clear that we will have to maintain the pressure if we want the mafia to really get out of the political system.

Claudia Samayoa is a Guatemalan human rights activist. She spoke with Shannon Young by phone from Guatemala City.