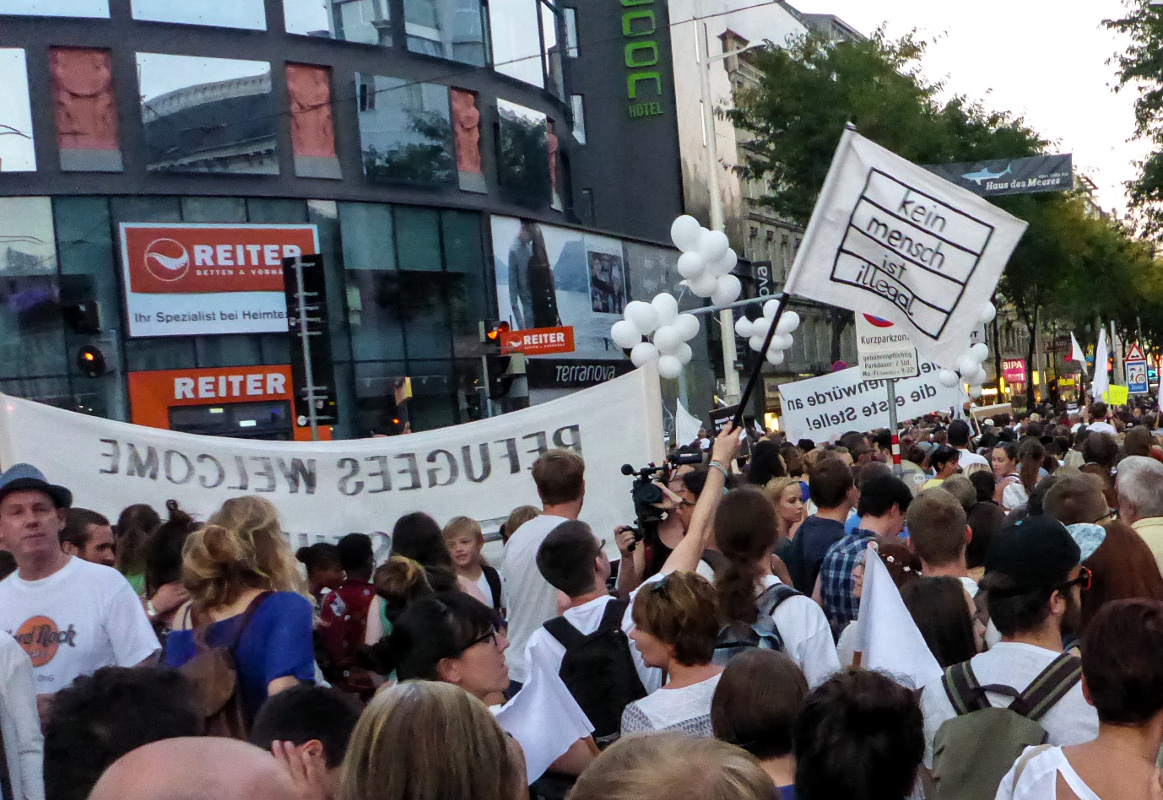 In Europe, the humanitarian crisis deepens as record numbers of refugees continue to arrive by land and sea, fleeing violence and poverty in the war-torn Middle East, North Africa and elsewhere. FSRN’s Jacob Resneck reports from Bonn.

Most of the refugees are arriving in southern and eastern Europe on their way to more prosperous countries like Germany, France and Sweden that offer the prospect of paid work and education opportunities.

There was a chaotic scene Tuesday outside the main rail station in the Hungarian capital, Budapest. Riot police had earlier ejected refugees trying to board trains for Austria and Germany from the terminal.

Refugees – most of them Syrians – were furious at being denied entry and chanted Germany! Germany!

Hungary complains of being overwhelmed by the crisis and is constructing a controversial fence along its southern border with Serbia in a vain effort to keep migrants from crossing on their way into the European Union. More than 140,000 migrants have entered from Serbia this year.

Shaban, a Syrian refugee who had paid for a boat crossing from Turkey to Greece, was interviewed by German state broadcaster Deutsche Welle after skirting the border fence and walking into Hungary. He said he is trying to get to Germany to start a new life with his family.

“This is my chance,” he told the broadcaster. “In Syria, my house and my factory is destroyed. This is a war. I can’t talk anymore – it’s enough.”

Hungary’s decision to try and prevent people from crossing has been criticized by other European leaders for trying to seal its borders.

“With regard to all those people who are politically chased out of their country and who are in war-torn countries, we have to be able to welcome them,” French Foreign Minister Laurent Fabius said. “It’s called the plea for asylum and every country has to respond to that. France, Germany and others have. But when I see certain European countries that do not accept these groups, I find that scandalous.”

Most refugees have no intention of staying in eastern and central Europe. This week thousands began reaching Germany en masse.

In the southern city of Rosenheim near the Austrian border, German officials say there is not enough space to feed and house the hundreds of people as they arrive.

Federal Police spokesman Rainer Scharf says German police have stopped checking trains and are, for the most part, allowing refugees to pass through the district on their way to larger cities in the country.

“We are reaching our limits here at the police station and I would go as far as saying that we are beyond our limit,” Scharf said. “We are trying to do what is possible within our capabilities.”

European leaders say they want the EU to do more to respond to the unprecedented influx.

Challenges remain in separating asylum cases from those who can be safely sent back to their countries of origin. And of course there are divergent ideas on how many refugees each country within the EU should accept.

Germany has said it projects receiving 800,000 migrants this year but warns such a figure is not sustainable in the long-term. There are also fears of a racist backlash following clashes between police and far-right demonstrators opposed to refugee centers and a spate of attacks directed at refugee housing, mostly in poorer parts of eastern Germany.

German Chancellor Angela Merkel said there would be no accommodating far-right activists opposed to refugees.

“What bothers me is that we are seeing this hatred, this atmosphere in our country and my response to it is emphatic: a clear line must be drawn — there can be no excuses,” Merkel said. “Of course we will put forward our arguments, but we cannot show a trace of sympathy.”

Of course there has been a great human toll. The International Organization for Migration said Tuesday that more than 350,000 migrants have risked their lives crossing the Mediterranean Sea this year. Of those at least 2,600 have died trying to make it to Europe.

Most of those deaths are due to drownings in the Mediterranean, but those crossing by land also take risks. That was illustrated last week with the gruesome discovery in Austria of 71 dead bodies, believed to be Syrian refugees, found in the back of an abandoned poultry truck parked by the side of the road. Police have arrested at least five suspected traffickers in that case.

UNICEF, the UN’s agency for child welfare, issued a stark warning Tuesday regarding the plight of children stranded on the border.

“UNICEF is closely monitoring the situation on the ground and we are working with local authorities to ensure that children are protected in these difficult situations,” Christophe Boulierac, a UNICEF spokesman in Geneva, said Tuesday. “UNICEF continues to advocate that all actions for children on the move must be guided by the best interest of every child.”

European interior ministers are set to meet later this month in an emergency meeting. But so far there remains little accord on how to respond to what many describe as Europe’s largest refugee crisis since World War II.