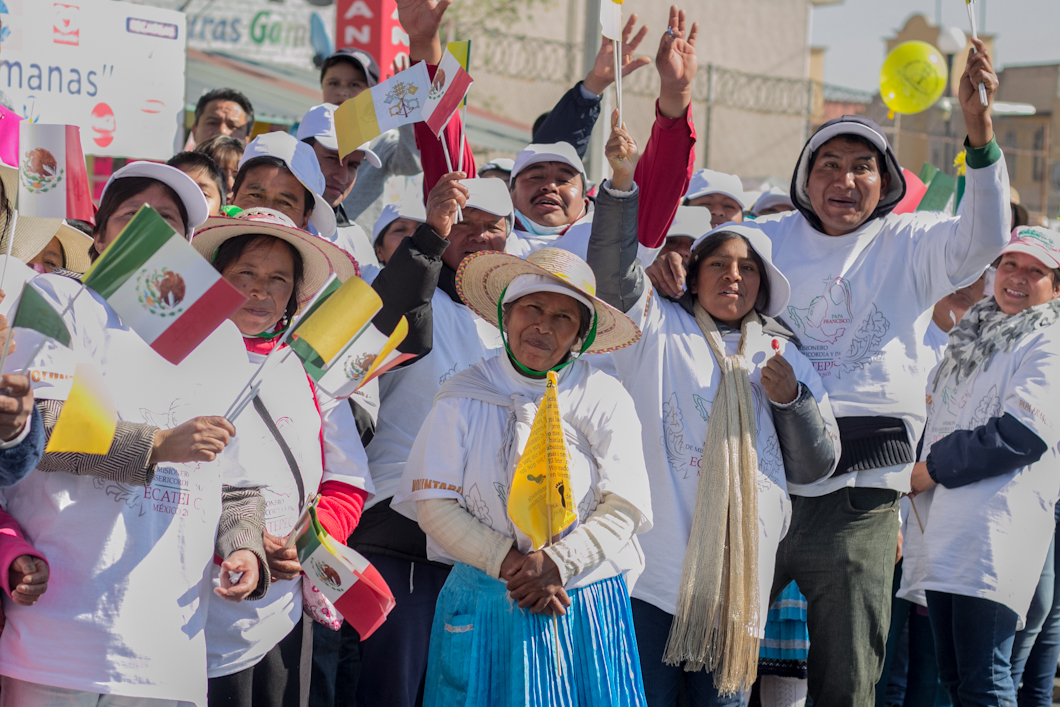 Part of the crowd gathered in Ecatepec, Mexico for the Pope's visit. (Photo credit: Andalusia Knoll)

Pope Francis concludes his six-day trip to Mexico today with a visit to a prison and a public mass in Ciudad Juarez. During his tour as the first Latin American pope, he gave mass in the southern and northern tips before indigenous people, victims of violence, migrants, and tens of thousands of ordinary citizens. His visit comes as Mexico is years-deep into militarized drug war violence that has killed an estimated 100 thousand people and left the whereabouts of at least 20 thousand others unknown. Andalusia Knoll has more from Mexico City.

Pope Francis’s first visit to Mexico in a papal role drew huge crowds everywhere he went. Hundreds of thousands of people thronged to an open air mass in Ecatepec, a sprawling industrial suburb of Mexico City. Delivering what the Pope called a message of “peace and mercy,” he referenced Mexico’s current day problems.

The Pope’s itinerary had built up high expectations that the pontiff would shine a spotlight on the troubles Mexico’s government so often tries to downplay. Ecatepec, for example, is notorious for its frighteningly high rates of gender-based murders, known here as femicides.

Leticia Mora’s daughter was kidnapped and murdered in the area. Mora planned to hold a large portrait of her daughter in the receiving lines for the Pope, but was warned against it because of possible retaliation due to the tight security. Mora says the Pope should have avoided euphemisms and spoken directly about the problem of disappearances and femicides.

“I would have asked him to speak, just as he met with children with cancer in the hospitals, I would have asked for him to take a few minutes to sit and speak with all these mothers who have faith in him, to share a few comforting words, some words of relief for mothers who have lost a daughter, like myself, in such a tragic manner and to give a blessing for all these women who have been victims of violence,” Mora told FSRN.

Other victims of violence in Mexico who sought to meet with the Pope are the parents of the 43 disappeared students of Ayotzinapa. Even though the Pope previously expressed his condolences towards the families, he declined their request for a meeting with him. The families were offered three seats at one of his masses, but declined the invitation for its lack of inclusiveness.

The Pope did, however, participate in a special event in the National Palace with the country’s political and military elites as one of his first agenda items.

Religious leaders did chant for the disappeared students ahead of the Pope’s mass in the state of Michoacan.

“Regardless of whether [the Pope] comes to this country and speaks or doesn’t speak about the 43, or femicide, or of pedophile priests, human trafficking, migrants, corruption…these problems will continue and it is our responsibility to fight against these problems,” Omar Garcia, a survivor of the attack in which the Ayotzinapa students disappeared, told Radio Zapote. “And we are disappointed by the fact that he met in the national palace with those who are responsible for this situation, and for the human rights and economic crises which affects thousands or millions of Mexicans.”

Pope Francis is the first Vatican leader to visit Michoacan, a western agricultural state plagued by drug cartels, corruption and violence. The state made international headlines a couple of years ago after citizen self-defense groups took up arms to fight drug cartels in the absence of government protection. Since then, many self-defense group members have been imprisoned, killed, or disarmed. One of the movement’s founders, Hipolita Mora, says even though he is of Catholic faith he has little hope in the Pope’s ability to change the on-the-ground reality.

“The criminals are not going to change after hearing the Pope’s speech here in Michoacan,” Horas points out. “The only thing that will make them change is putting them in their place, which is jail.”

During his mass in Michoacan’s state capital, Pope Francis urged young people to not resign themselves to working for organized crime even though they live in a violent environment.

On his final day in Mexico, the Pope held a mass in the border city of Ciudad Juarez. Migrants and victims of violence received special invitations. Among them are the parents of students massacred at a 2010 birthday party in the neighborhood of Villas del Salvarcar. Their local priest, Father Toño Urrutia, said including Juarez in such a high profile trip was itself an expression of good faith.

“We feel the solidarity with the suffering faces in our society, the suffering faces and the lack of justice that is so prevalent in our daily lives nationwide,” Urrutia said in a telephone interview. “The fact that he is holding a mass where he will openly speak about migration and victims of violence and visit a prison leads me to believe that it is a very clear position in favor of the people who suffer.”

During the term of former president Felipe Calderon, homicide rates in Ciudad Juarez reached such a point that the city became known as the world’s murder capital.

During his trip to Mexico as the first Latin American Pope, Francis walked a line by maintaining his humanitarian image in visiting symbolic locations while not straying from the realm of diplomacy in his spoken statements. While many of those deeply affected by violence and inequality had hoped for more concrete shows of support, the visit has left little doubt that Pope Francis is using his position as top statesman to give the Vatican a public image makeover.