Murders of transgender people on the rise as public presence grows 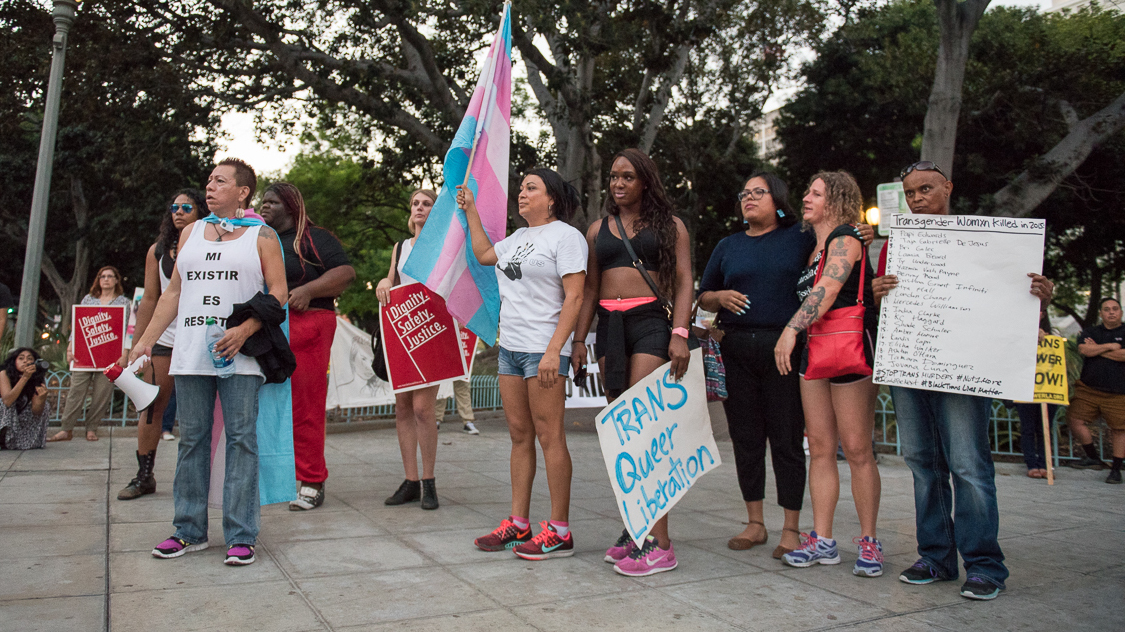 On Wednesday, the Obama administration announced the appointment of the first out transgender White House staffer, Raffi Freedman-Gurspan, who will be in charge of outreach and recruitment for the presidential personnel office. Freedman-Gurspan has a long history of activism in the trans community. She formerly served as policy adviser at the National Center for Transgender Equality.

The high-profile post adds to a rapidly growing public awareness about gender dysphoria and gender nonconformity, expanded by celebrity transitions and reality TV. But transgender activists say increased public attention has unintended consequences – while it has increased acceptance for some , it has also fueled a backlash and led to increasing violence against those who aren’t rich and famous. And the recent spike in trans murders in they say, underscores the crisis facing mny transgender people. Larry Buhl reports from Los Angeles.

“Our lives matter,” chants trans activist Bamby Salcedo as she leads a rally in front of LAPD in response to the most recent murder of a transgender woman. “The lives and existence of trans people matter. And we are not going to take it any longer.”

This week it was Tamara Dominguez, who was repeatedly run over by a car in a church parking lot in Kansas City, Missouri. Authorities are looking into her death as a potential hate crime.

At least nineteen transgender men, transgender women and gender nonconforming people have been killed in the U.S. so far this year, an increase over fourteen homicides in all of 2014. And those are just the documented homicides. Activists say the true number may be higher because police can mis-gender murder victims. And they say trans survivors of violent crimes are often unwilling to report it, because of their gender status.

This month three black trans women — Elisha Walker, Ashton O’Hara, and Kandis Capri — all unrelated, were killed in a 24-hour period. Leaders in the trans movement say violence against them, instead of abating, is reaching a national crisis.

“We live in a time when there’s an increased visibility of transgender people like Laverne Cox, Janet Mock, Caitlyn Jenner,” says Jorge Amaro. The spokesperson with the National LGBTQ Task Force says having vocal transgender celebrities has been a mixed blessing. “At the same time anti transgender violence has skyrocketed.”

Activists point out that the lives of most trans people, especially trans black and Latina women, are quite different than those of political appointees and celebrities. Trans women of color are disproportionately victims of violent hate crimes, including murder, and advocates believe the increased visibility and openness of trans people has made them even more vulnerable.

Mariana Marroquin, a client advocate at the Los Angeles Gay and Lesbian Center, explains that trans people don’t have much faith that law enforcement will protect them.

“The Los Angeles LGBT Center had been doing a lot of work with the LAPD and sheriff’s department regarding training,” the trans Latina Marroquin says. “But it is still happening that when you go to the police to make a report you are victimized again. Because they ask questions about your gender, about your identity instead of what happened, so that keeps people from looking for protection.”

The risk of violence is not just about trans hate and intolerance. Marroquin says the problems that lead to their lives being cut short are systemic.

Other members of the transgender community agree that the recent spike in trans murders is really a continuation of longstanding issues that cut their lives short in many ways.

Jennicet Gutierrez is an organizer with Familia Trans Queer Liberation Movement. She was also the activist who drew criticism from some in the LGBT community for heckling President Obama during a speech, about not granting quick asylum for transgender immigrants.

“The reality is for many of our transgender sisters, they don’t have that support,” explains Gutierrez. “They get kicked out of their homes, which puts them on the streets. Many don’t have housing available, so they try to meet with people and sometimes the people they connect with put them in positions to be abused and the sad thing is in some cases for them to end up murdered.”

A recent report by the Center for American Progress shows that transgender people are four times more likely to live in poverty. That puts them in situations and neighborhoods that increase their risk of being victimized.

Discrimination in housing, education, health care and employment can lead them to illegal activities like survival sex and drug dealing, which leads to violence against them, for which they’re afraid to seek help. This vicious cycle is a grim reality for many in the community.

That’s why trans activists aren’t demanding new laws, at least not now. In 2009, President Obama signed the Hate Crimes Prevention Act, which included transgender protection, but it hasn’t stopped crimes against them, and hasn’t improved their access to the social safety net.

They admit that while the increased visibility of transgender people is part of the problem, it is also inherently part of the solution. They hope that recent and important strides for public figures will translate to similar inclusion for all of them.