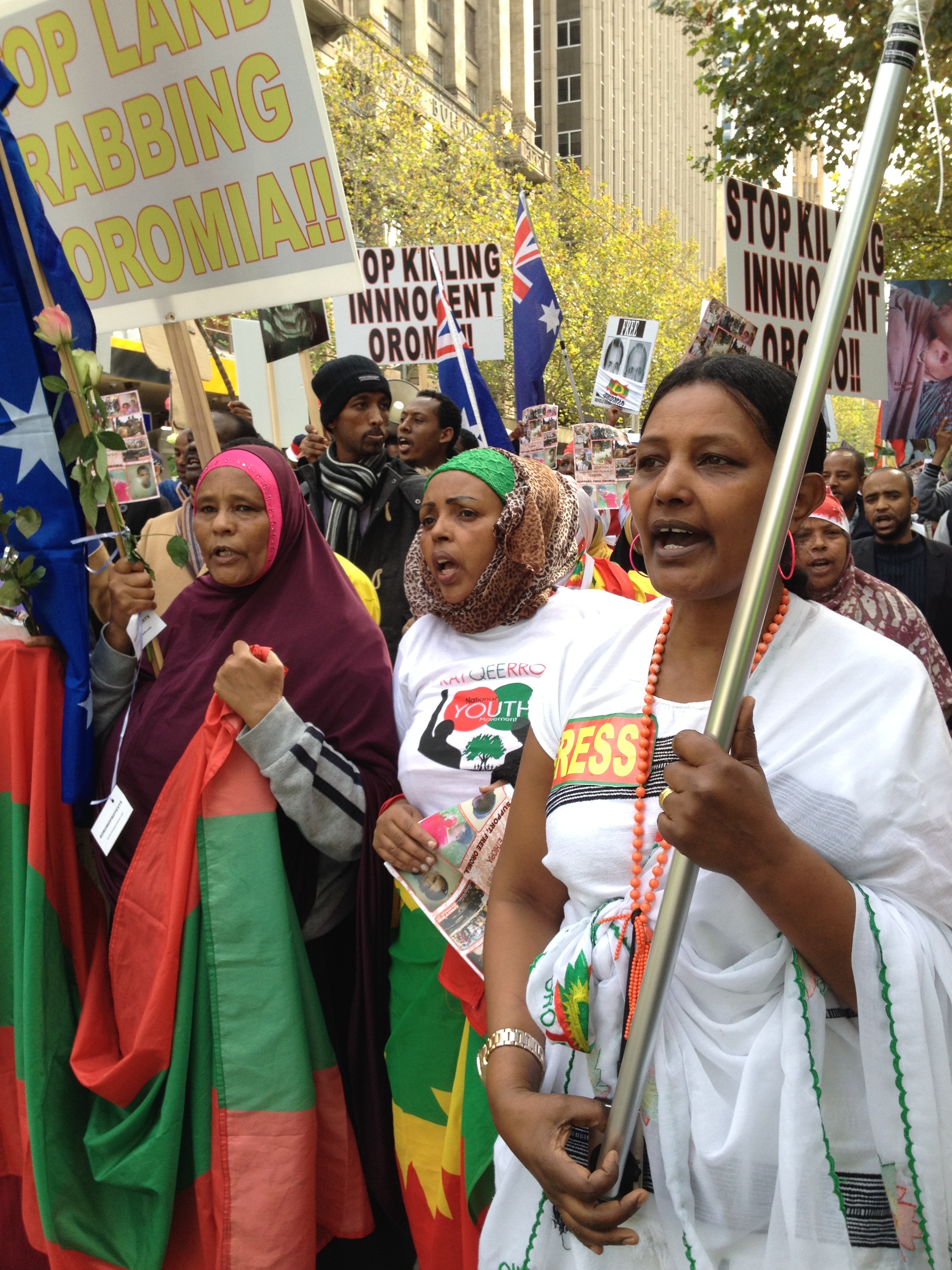 In Ethiopia, student-led protests related to a land dispute in the Oromia Region state are in their fourth week. The ethnic Tigrayan-­led Ethiopian government has violently cracked down on peaceful protests, killing dozens of ethnic Oromo students and injuring or imprisoning hundreds more. The unrest prompted an unprecedented response from the Oromo diaspora and human rights organizations around the world.

Demonstrators have rallied in cities in Australia, the U.S, Europe, Egypt, Uganda and Israel, calling for their respective governments to condemn the violence and raising awareness about the human rights situation for the Oromos in Ethiopia. Rachael Bongiorno reports from one such rally in Melbourne, Australia.

On a crisp Friday morning, a sea of green, red and yellow Oromo flags lines the streets of Melbourne. The city’s Oromo community is demonstrating to draw attention to human rights abuses facing Oromos back in Ethiopia. The protesters halt trams and cars, chanting and handing out fresh roses with tags quoting Martin Luther King JR’s famous words “injustice anywhere is a threat to justice everywhere.”

The Oromo people are the largest indigenous ethnic group in Ethiopia but they’ve historically been marginalized and suffered discrimination by successive Ethiopian governments. Human Rights Watch and Amnesty International have long documented widespread discrimination, violence, and arbitrary arrests against the Oromo people. One young girl, who asks not to be identified, explains why she’s come out to protest.

The Oromo students in Ethiopia are calling for full implementation of the country’s constitution, which includes UN human rights principles as well as provisions for self-determination. These guarantees extend to both Oromia state and the Ethiopian capital, Addis Ababa. But while the capital is located in the state, it falls under the central government’s administration. And the government wants to expand its boundaries into Oromo lands.

Soreti Kadir is one the organizer’s of the on-going world-wide protests. She says, “We’re here today because the Ethiopian government has announced this plan that it’s going to be displacing up to 2 million Oromo people.” Kadir continues, “This means not only do the identities of these towns that are no longer going to exist because they will be dissolved which are predominantly Oromo. But Oromo people and farmers become displaced and don’t have a way to actually earn a proper income.”

The government’s planned expansion of Addis Ababa – known as the Master Plan – is just one of many such plans that have affected the Oromo region and forced the indigenous people from their lands. Under the Abyssinian colonial rule during the 20th Century, the Oromo language was banned and the Amharic culture was imposed. The ban was only lifted in 1991, as Toltu Tuffa explains. “This is not the first Master Plan, there have been a number of other ones, and this is the 10th installment of the master plan.”

“Even though there is recognition of Oromo provinces and regions, the fact that these areas will be transitioned away under the federal district of the Ethiopian government is essentially another form of re-colonisation,” says Tuffa, explaining the implications for language, culture, lifestyle and economic and social well being.”

According to the Minnesota Oromo Association, the Oromo diaspora has mobilized like never before. In a country where press freedom is in decline, social media has been a major tool to get information out. For 19-year-old organizer and blogger Soreti Kadir, the recent arrests of three journalists and six bloggers known as Zone 9 is just more evidence of the Ethiopian government’s suppressing dissent.

“It’s been people who are blogging, people who are using twitter, Instagram, Facebook who have really pioneered this entire movement,” says Kadir. “The Ethiopian bloggers have been arrested because the Ethiopian government’s major tactic in making sure these things don’t spread… is a suppression of freedom of speech.”

The Ethiopian Government argues the Master Plan will be a step forward for the Ethiopian people and the economy and dismisses the recent unrest, saying the protesters are being manipulated by the media inside and outside the country.

One of the largest protests in the diaspora was in Minnesota, which boasts an Oromo population of about 40,000 people.sen Hussien, Executive director of the Minnesota Oromo Association says the Ethiopian government often seeks to discredit protests in this way.

“Every time there is a protest in the country be it in the Oromia region or elsewhere in the country, the government points it’s fingers at external forces,” according to Hussien. He continues, “This has been the tradition of this regime since it came to power. Rather than looking at itself and wondering if its policies have anything to do with why people go on protests.”

Hussien says the situation is getting worse, with more crackdowns on the protests this week. “The last 5 days alone there are reports in one city there were 152 people who were wounded in the city of Najjo and also in Nekemte and another small town in Gori.,” he says, adding “And according to a report I received this morning in the town of Nekemte alone there are 600 students that are detained.”

The Australian Oromo community is planning another protest in Australia’s capital, Canberra when parliament resumes next week.