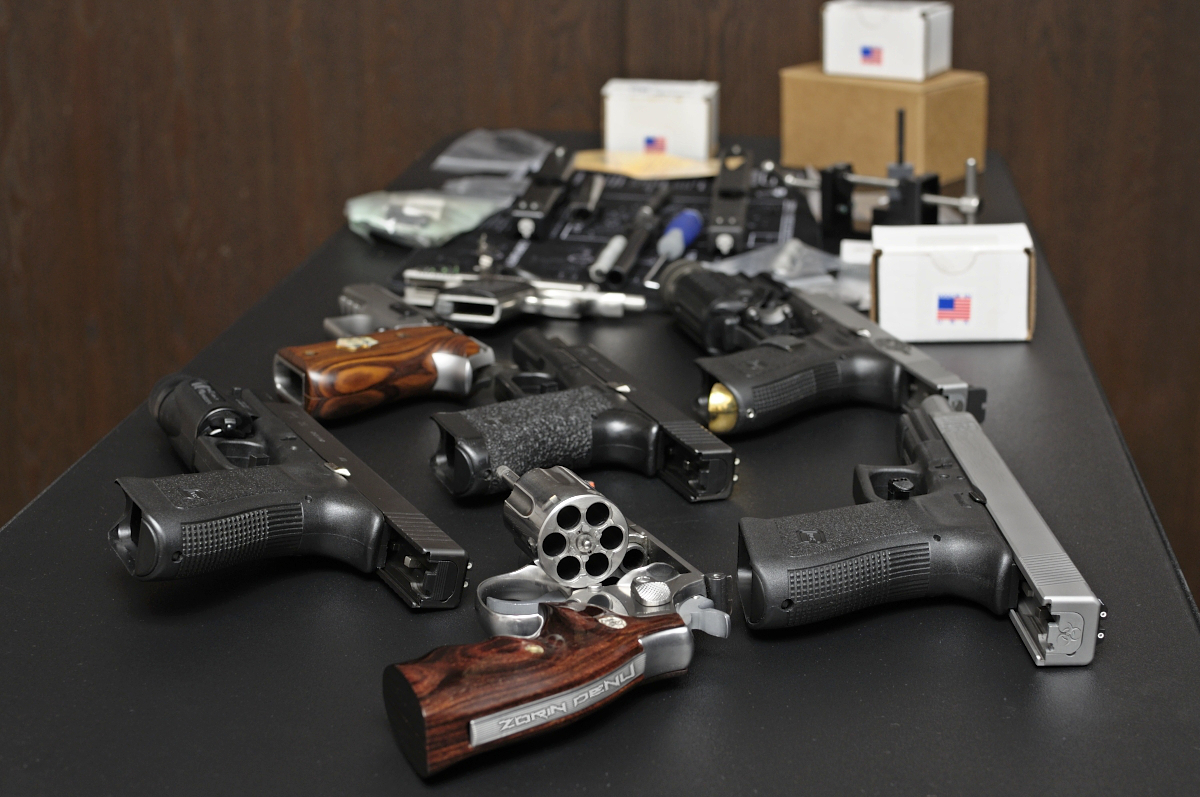 A collection of handguns displayed on a table. (Photo credit: Zorin Denu via Flickr / Creative Commons)

President Obama reiterated the call for tougher gun control laws this week, saying since 9-11 about 400,000 people have died in the US as a result of gunfire. In New York, Representatives Nydia Velasquez and Hakeem Jeffries announced the Reducing Gun Violence in Our Neighborhood Act of 2015. The bill aims to stop the so-called Iron Pipeline, or guns brought into New York from states with weak gun laws. Linda Perry Barr has more from New York City.

New York Representative Nydia Velasquez introduced legislation this week that seeks to reduce gun violence. Her bill would tax guns, and clamp down on missing and stolen weapons. Velasquez hopes to seize on a moment of advocacy in the country happening right now.

U.S. Congressman Hakeem Jeffries co-sponsored the bill: “There’s no doubt that a significant number of members of Congress function as wholly owned subsidiaries of the NRA. We understand that but we think there is growing support on both sides of the aisle for some common sense gun legislation in the face of tragedy after tragedy after tragedy: Charleston, South Carolina; Roanoke, Virginia; Lafayette, Louisiana. Police officer killed here in East Harlem. Tragedy all across the country in both blue states and red states.”

The bill requires gun owners to report stolen or lost firearms within 48 hours under threat of a $10,000 fine and establishes a federal registry to keep track of the weapons, for use by law enforcement to solve crimes. A $100 tax would be added to gun sales to be used for Department of Justice programs to reduce crimes and for mental health counseling. The legislation would also incorporate technology into the gun manufacturing process to identify a firearm through a mobile or fixed reading device.

“And it was senseless killing. They didn’t do anything. They didn’t bother anyone,” Adams said. She was told the guns used to kill her sons were from out of state, from down south, adding “we must do something about that I-95 pipeline.”

“And so you can go down to Georgia, Florida, Virginia and you can fill up your car, load your trunk with guns and sell them at a profit in Harlem, the Bronx,” says Leah Gunn Barrett with New Yorkers Against Guns.

She says it’s called the Iron Pipeline. She compared New York’s gun problem to roaches, in that “it doesn’t matter if we’ve exterminated our state — Pennsylvania hasn’t, Virginia hasn’t, the Carolinas haven’t, Florida hasn’t, and Georgia.”

According to city officials, 90 percent of guns found at New York City crime scenes come from out of state. This year nearly 1,100 people in New York City have been shot with an illegal gun.

Brooklyn District Attorney Ken Thompson says during the last year, his office has been committed to prosecuting interstate arms traffickers, adding gun violence is not confined to New York City.

“Just look at Chicago. Over 2,400 people have been shot so far this year in the Windy City,” Thompson says. “So this is a national crisis that requires a response from our national leaders.”

President Barack Obama took up the issue again this week in his hometown, Chicago. Addressing the IACP, the International Association of Chiefs of Police, he said there are those who criticize any gun safety reform: “They say look Chicago had a spike in homicides this year. They’ve got gun safety laws so this must be proof that tougher gun safety laws don’t work. Maybe make things worse. The problem with that argument, which the Chicago Police Department will tell you, is that 60 percent of guns recovered in crimes come from out of state. You just got to hop across the border. It is easier for a lot of young people in this city and in some of your communities to buy a gun than buy a book. Easier in some to find a gun than it is to find some fresh vegetables and a supermarket. That’s just a fact.”

Back in New York City this week, Manhattan District Attorney Cy Vance announced indictments against six gun traffickers caught selling 74 illegal guns and ammunition to undercover detectives. The weapons are from out of state.

New York City Mayor Bill De Blasio says gun reform doesn’t happen in a vacuum: “We find ourselves constantly challenged by the massive flow of guns from around the rest of the country and for the lack of any meaningful regulation nationally. We have to put this in perspective and talk about the Iron Pipeline.We’ve seen the human consequence of the Iron Pipline We’ve lost police officers, we’ve lost parents, we’ve lost children because somehow this country still tolerates the notion of the free flow of guns.”

The Reducing Gun Violence in Our Neighborhood Act of 2015 was referred to three committees in the U.S. House — Judiciary; Ways and Means; and Energy and Commerce — for debate. Students at New York City City Hall this week for the bill’s launch are watchful and hopeful – they carried signs that said Smart Gun Laws Work.