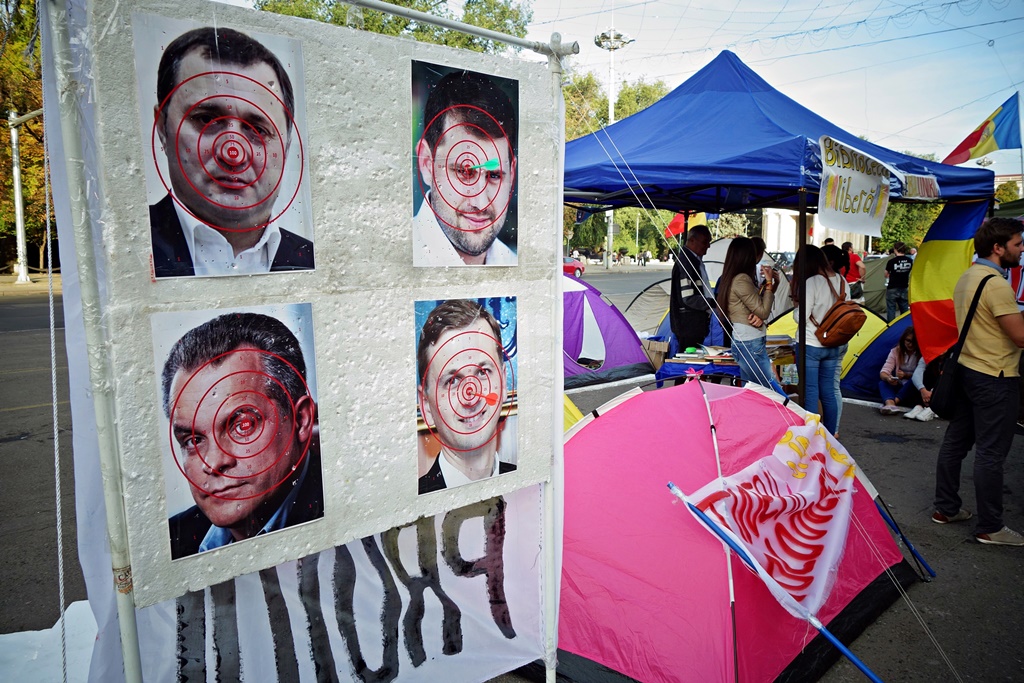 The Eastern European nation of Moldova has become the latest scene of an Occupy-style movement against corrupt politicians. Hundreds of protesters have been camping for weeks in the central square of the nation’s capital city, Chisinau, calling for the government to resign. The demonstrations grow on the weekends, with crowds of thousands joining in street protests that began after more than $1 billion vanished from the vaults of the country’s leading banks.

A former prime minister was arrested late last week as part of the scandal that has led major international financial institutions to suspend their assistance to the poor nation that is seeking closer ties with Western Europe. Filip Warwick reports.

Hundreds of people camping out in front of Moldova’s parliament are demanding early elections and they want the Moldovan government and the chief prosecutor’s’ office to resign their posts.

The protesters accuse parliamentary ministers of serving the interest of the oligarchs, particularly after $1 billion vanished from three of the country’s leading banks in 2014.

According to a recent parliamentary report, the financial institutions allegedly issued fictional loans to big businesses in Moldova that in turn funneled the money out of the country. Though the banks are now under state administration some of the money has vanished into offshore accounts. The whereabouts of the rest is anyone’s guess.

To avert a complete meltdown of the banking sector, the government intervened in the form of a financial bailout with money from the taxpayer-funded state reserves.

With more than 200 tents occupying Chisinau’s central square and riot police nearby, the tent city resonates the spirit of the Kiev Maidan protests, though on a lesser scale.

Ultimately the Kiev demonstrations resulted in the ouster of former Ukrainian President Viktor Yanukovych in 2014, but there are no signs in Chisinau that would suggest a forceful removal of the Moldovan government.

But 20-year-old Chisinau University student Lara Abdalu traces the protests back to an earlier movement. “The same thing happened in 2007. People wanted another government. But there is no guarantee that the new government will be ok,” she points out. “But if they refuse to go there might something like in Ukraine, Maidan. I hope that it will not happen”.

As some students sit around a peace sign chalked on the ground, singing Moldovan and Romanian patriotic songs, others throw darts at an oligarch board of shame. Activists meander around the various tents: a food canteen serves scrambled eggs for those returning from work and an on-site doctor provides basic health care.

Stress is high, with the average wage static in the face of rising prices. The monthly pay remains about $250, despite price hikes of up to a third in essential commodities like food, gas and electricity.

Like Ukraine, Moldova has close links with both the European Union and the ex-Soviet Republics, with both countries sharing an EU border in the West and a Russian backed self-proclaimed state in the East.

As Moldovan and EU flags protrude from various tents, protesters have yet to reject the views and values of the European Union and have focused their anger on the Moldovan government.

The scenario provides fertile land for pro-Russian political groups who see an opportunity to voice an alternative path and challenge pro-EU groups given the frustration demonstrated amongst protestors.

Military reservists form one of the core protesting groups. Forty eight-year-old veteran Emil Lupescu believes the government’s lethargic approach to the scandal is slowly playing into the hands of the opposition.

“In Moldova there’s another group, a pro-Russian one, currently taking a back seat and observing the situation; what’s going on in the country and what may take place in the near future. But they won’t stop there, they have their own agenda,” Lupescu explains. “Should little progress take place in terms of resolving this governmental crisis with peaceful means, then they might take a more proactive approach.”

Lupescu says Europe’s reaction to the crisis could tip that balance in favor of strengthening democratic institutions, but for it to work, “Europe has also make the first step and to show that it interested in easing the crisis in Moldova. If this were not to take place the people of Moldova would see this as Europe turning its back on the country and ultimately sending a message that Europe leaves Moldova to its own fate.”

Moldova has an anti-corruption institution which, according to law, should be independent, but is in fact dependent upon political forces. Victoria Bucataru is program director at the Foreign Policy Association, an independent think-tank which supports European Union integration.

Ordinary Moldivans have seen a substantial decline in their disposable income, the result of a toxic economic cocktail of spiraling inflation and the suspension of financial assistance from the World Bank and the International Monetary Fund.

Recently, the head of Moldova’s central bank resigned after six years in charge of the country’s financial institution. Nonetheless this may be too little too late – protesters have lost confidence in their government’s ability to deliver prosperity.

The former bank governor denies responsibility in the scam and Moldova’s Prime Minister is calling on the central bank to take all necessary measures to support the faltering Moldovan currency.

Both moves may prove to be two more nails in the government’s coffin.