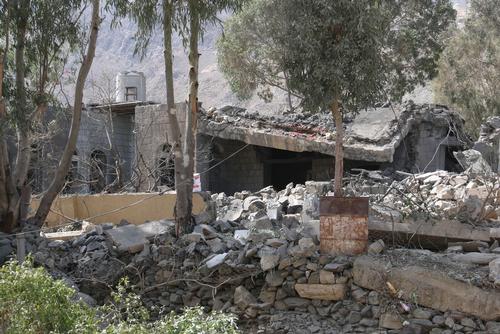 Rubble is all that remains of the Haydan MSF hospital after an October 26, 2015 airstrike. (Photo credit: Yann Geay/MSF)

Geneva is set to host talks between the two main Yemeni factions this weekend. The talks come after seven months of Saudi-led airstrikes have internally-displaced more than 2.3 million people . Nell Abram has more.

Airstrikes destroyed another hospital run by the international medical charity, Doctors Without Borders – this time in Yemen. United Nations Secretary General Ban Ki Moon called for an “impartial investigation” after airstrikes on the UN-supported Hayadeen Medical Hospital in Sa’dah. No deaths were reported, but the facility operated by the group also known as Médecins Sans Frontières, or MSF, was completely destroyed. Both the UN and MSF accuse the Saudi-led, U.S.-backed coalition and say more than 200,000 people in a war zone are now without access to lifesaving medical care.

The Saudi Ambassador to the UN, Abdallah Al-Mouallimi, initially accused MSF of not accurately reporting the hospital’s coordinates, but later back-tracked and categorically denied coalition responsibility.

“The Arab coalition aircraft did not carry out operations in Sa’daa at the time [of] the reported incident,” Ambassador al-Mouallimi said in a UN press conference. “The nearest area of operations was close to the Saudi-Yemeni border about 40 kilometers north of the above mentioned hospital. The causes of the the blasts which occurred in the hospital cannot be determined at the point of time without conducting a thorough investigation.”

The now seven-month-long Saudi-led offensive in Yemen, ostensibly to stamp out a rebellion by Iranian-backed Houthis, has triggered a massive humanitarian crisis. Continuous airstrikes have killed more than 5,000 people and devastated key infrastructure in what was already the Arab region’s poorest nation. According to the UN, 2.3 million people are now internally displaced. Talks between the ousted government of President Abd-Rabbu Mansour Hadi and Houthi leaders are set for this weekend in Geneva.

Global stakeholders in another multifaceted armed conflict – the Syrian Civil War – are in Vienna for talks. Iranian representatives are at the table along with the United States and Russia – who only recently actively entered combat in the country. Missing from the international talks? The primary Syrian political opposition and armed factions fighting to oust President Bashar al Assad.