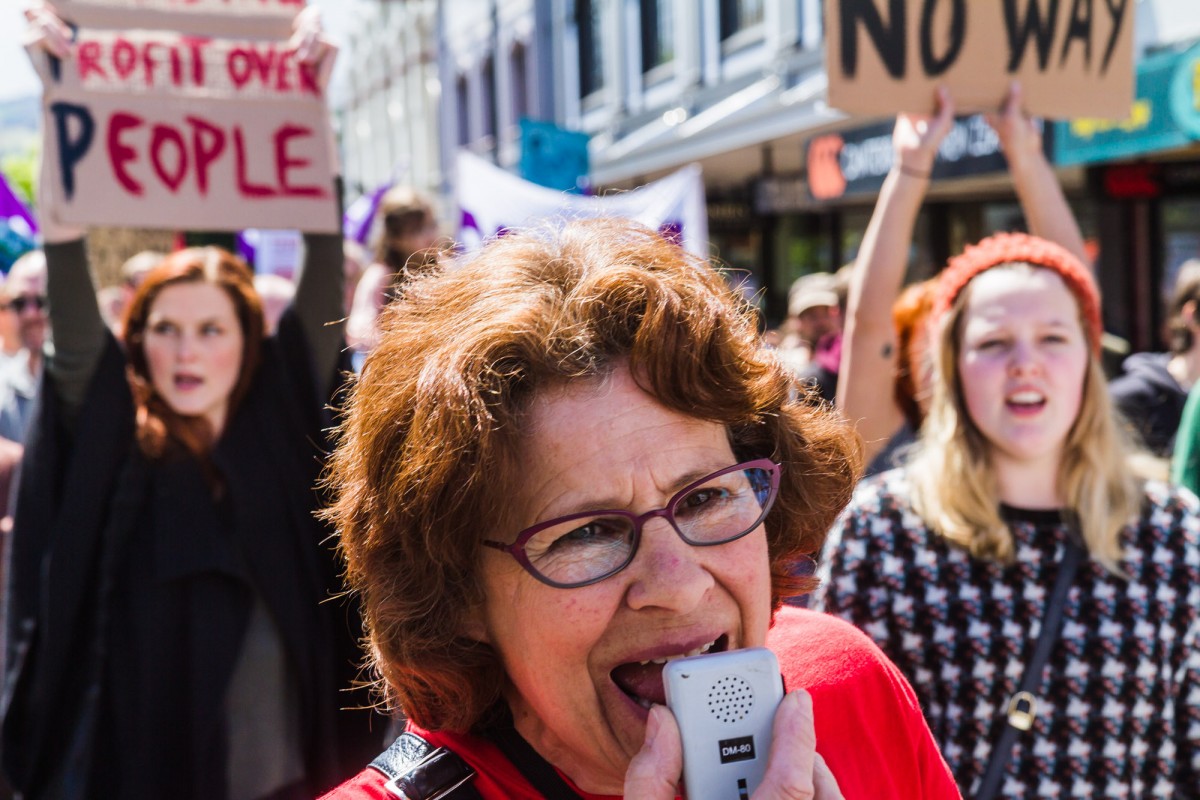 Negotiators from twelve countries finalized the language of the controversial Trans Pacific Partnership trade agreement earlier this month after five years of closed-door talks shrouded in secrecy. The trade deal now goes back to negotiating nations, including the United States and New Zealand, for legislative approval or rejection. The text of the deal remains secret and documents that would shine a light on the negotiation process itself aren’t due for release for years, if at all. But a landmark New Zealand ruling on the release of those documents may speed up that process, or show that the trade agreement is above national laws. Carla Green reports from Dunedin, New Zealand.

Kelsey wanted to see what New Zealand was fighting for, and what it wasn’t;  what its negotiators had yielded on;  an honest analysis of the costs and benefits of the TPP — if New Zealand had done one.

Trade minister Tim Groser had a legal obligation to respond within 20 working days. And he did, with a categorical refusal to release the requested documents.

Which was perhaps unsurprising, given the level of secrecy surrounding the negotiations.

But after months of delays, Kelsey was finally able to take Groser to court, with help from Greenpeace NZ and six other organizations.

The judge’s ruling on that case came out on October 12, just one week after negotiators finalized the text of the TPP, and he ruled staunchly on the side of Kelsey.  Supplying information even when it’s time-consuming, he wrote, is “the price Parliament contemplated when it passed the official information act.” Groser now has six months to release the documents, or come up with a legally acceptable reason as to why he can’t.

“Hopefully the decision will allow people to see much more information about what led to the final text, both in New Zealand, and will create a precedent for the release of more documents internationally,” Kelsey says.

“The IP chapter just confirms all the fears that we already had,” says Dunedin-based anti-TPP activist Jen Olsen. “And that was that, basically, copyright laws and patent laws are going to be strengthened, to the detriment of freedom of information and freedom of availability of medications.

To elaborate, Olsen dragged out a stack of expert opinions that had been written up in the weeks since the chapter’s release.

Olsen says the IP provisions would extend the term of copyrights and make patent laws more powerful than domestic legislation in the signing countries.

And according to Olsen, tucked away in the final IP chapter was a provision just for New Zealand on the Treaty of Waitangi.

The Treaty of Waitangi was signed between Maori and the Europeans back in the colonial era, and is still a powerful legal document in New Zealand. A coalition of Maori individuals and organizations appealed to the Waitangi Tribunal in July, contesting the government’s failure to consult Maori on the deal. Olsen said this provision was a response to that.

“But even despite that, there are still concerns from Maori that indigenous flora and fauna could fall under patent agreements by people who breed plants. And could end up being said to be owned by people. Those patents can be sold to overseas owners, etcetera,” explains Olsen.

In New Zealand, only the prime minister’s Cabinet has to sign off on the TPP itself. But the entire Parliament has to vote on the domestic legislative changes required for New Zealand to comply with the deal.

Olsen says right now  it looks like the changes would pass by one vote. But that’s a margin that could shift with public pressure. She hopes that the release of the documents at the heart of Kelsey’s lawsuit could create momentum.

But Greenpeace NZ policy adviser Nathan Argent says even if those documents aren’t released before the approval of supplementary legislation, there’s still hope for TPP critics. Now that the TPP’s been agreed on, the text of the deal will be made public – likely in the next month. And once people get a look at the deal itself, Argent predicts votes could shift.

“I think they’ve probably signed a bad deal on behalf of New Zealand. And that’s something the country’s locked into,” Argent says. “So I think there will be some political implications if the deal is as bad as we think it is.”

And Kelsey says that even if the documents in her case are never released, the court battle hasn’t been for naught. She argues that for people who use the official information act, it’s a landmark precedent.

“We hear that the government is using this blanket rejection of the provision of any information quite commonly across a number of different subject areas. So hopefully, it will have given them a wake-up call that they need to take the act and the rights of New Zealanders to access information more seriously,” says Kelsey.

She and Argent also hope the case will be a precedent for people in other countries who want information released about the TPP or other, similar trade agreements. If those countries refuse to release information, appellants might be able to point to Kelsey’s case and say, “Well, New Zealand did.”