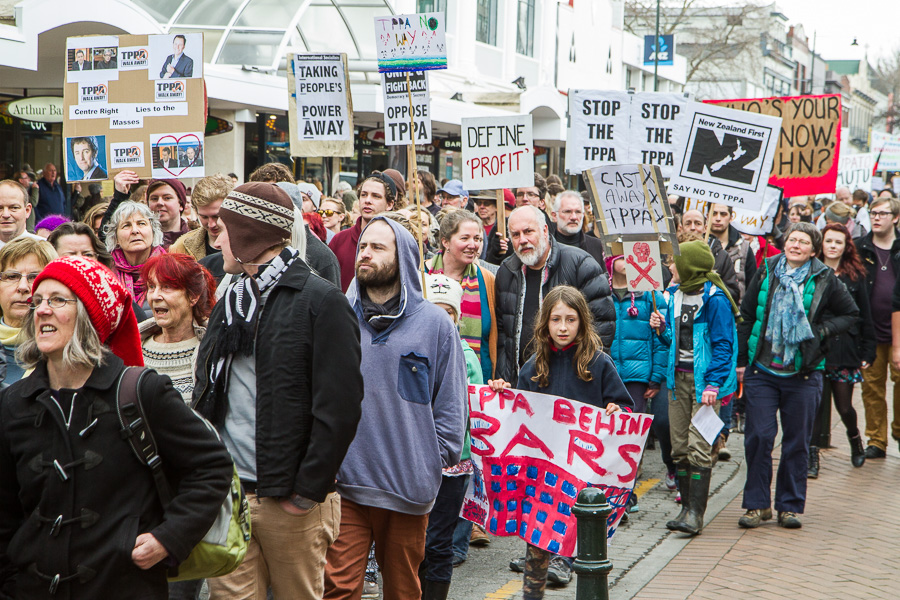 Twelve countries, including the United States and New Zealand, are participating in confidential negotiations on the Trans-Pacific Partnership agreement, or the TPP. Activists around the world are ringing the alarm on the TPP, saying it is far from a standard trade agreement and could threaten the sovereignty of countries that sign it. The latest round of TPP negotiations stalled in Maui, and were followed by a week of actions against the controversial trade agreement  in New Zealand. Carla Green reports.

Thousands of protesters are taking to the streets across New Zealand, calling on their country to “walk away” from negotiations of the TPP.  More than 2,000 people recently marched in the small New Zealand city of Dunedin, where activist Rob Stewart addressed the crowd.

“We’re here to let our government know we don’t want this thing to go through. We’re here as leaders of our community, telling them, no way. Who’s with me?” Stewart asks the cheering crowd.

The TPP is highly controversial, not only because of the secrecy that surrounds it, but because of leaked portions of the agreement that trade experts say could have serious negative implications for citizens of the signing countries.

They’ve warned the TPP could affect everything from the price of medicine to copyright laws to state-owned enterprises like CBC or Radio New Zealand.

Activist and social worker Jen Olsen organized the recent anti-TPP protest in Dunedin. She thinks New Zealanders are upset about the TPP for a lot of the same reasons people in other countries are, including its confidentiality.

“A big one is the secrecy itself and the fact that once people find out that something as wide-ranging and important as the TPP is happening under their noses but being hidden, that is something that concerns a lot of people, and they want to find out more,” points out Olsen.

That very secrecy is at the core of a joint court case pending against the New Zealand government. Legal scholar Jane Kelsey is leading the legal action on behalf of seven organizations, including Consumer NZ, Oxfam, and Greenpeace. Back in January, she filed an official information request for a number of TPP-related documents, including the draft text itself.

When Kelsey requested the documents, trade minister Tim Groser refused to hand them over, so now the group is taking him to court. They filed the court papers on August 5th. Kelsey can’t talk about the details of the legal case before it’s heard by New Zealand’s High Court, but she can say it’s challenging the right of the New Zealand government to keep the TPP a secret.

“We are questioning the interpretation that the minister has made of the power to withhold documents under this domestic legislation. Irrespective of whatever they may have agreed to externally,” Kelsey explains.

If the petitioners prevail and the TPP draft texts are released, it would be the ultimate victory in a years-long public education campaign about the trade agreement.

Once people understand what the issues are and how it affects them, they become vocal. And we’ve seen politicians, including now the Labour party, expressing their own concerns,” says Kelsey. “And so I think it’s simply been a matter of education around something that is very obtuse.”

Japanese opponents to the TPP have also launched their own constitutional challenge to the secrecy of the agreement. That legal action mirrors a spirited public engagement about the TPP that the Japanese and New Zealand public share.

“My experience is that the debates in New Zealand have been amongst the most vibrant, aside from perhaps Japan, of any of the other countries,” Kelsey says.

Kelsey thinks that vibrancy could, in large part, be explained simply.

“New Zealand does not have a free trade agreement with the U.S., and nor does Japan. A number of the other countries, if you look at Chile or Peru, they already have Free Trade Agreements with the U.S.,”Kelsey explains. “So many of the more extreme demands that the U.S. is making in the Trans Pacific Partnership agreement, especially in the non-trade areas, such as intellectual property or investment, other countries have already made.”

Olsen has also noticed the interest the TPP has piqued in New Zealand, as evidenced by the recent week of widespread public action, and attributes it at least in part, to a deep and enduring skepticism of the national government.

“I think that, in New Zealand, if people get the idea that someone’s trying to pull the wool over their eyes, they don’t like it. And they’re all the more likely to say ‘No, I want to know about that.  I’m not going to let that go. I don’t accept it,'” says Olsen. “There’s not so much conformity, perhaps. And I certainly think in the United States, there’s a higher level of political conformity and a less of political discussion and information and understanding in the general community than there is here.”

When talks in Maui last month failed to reach a conclusion, New Zealand activists – and even some industry opponents – rejoiced. It bought them more time to convince the public of the ills of the TPP, Olsen says.

And time is ticking – Canada has elections coming up in October, and the United States has its own roadshow of an election cycle rapidly approaching. Global trade analysts speculate that if Canada and the US don’t sign the TPP before their respective political changeovers, they never will.

But New Zealand prime minister John Key insists New Zealand will be able to close the deal, and said negotiators were getting “close to the finals bits” of the issues at hand. Further TPP negotiations are tentatively planned for later this month.