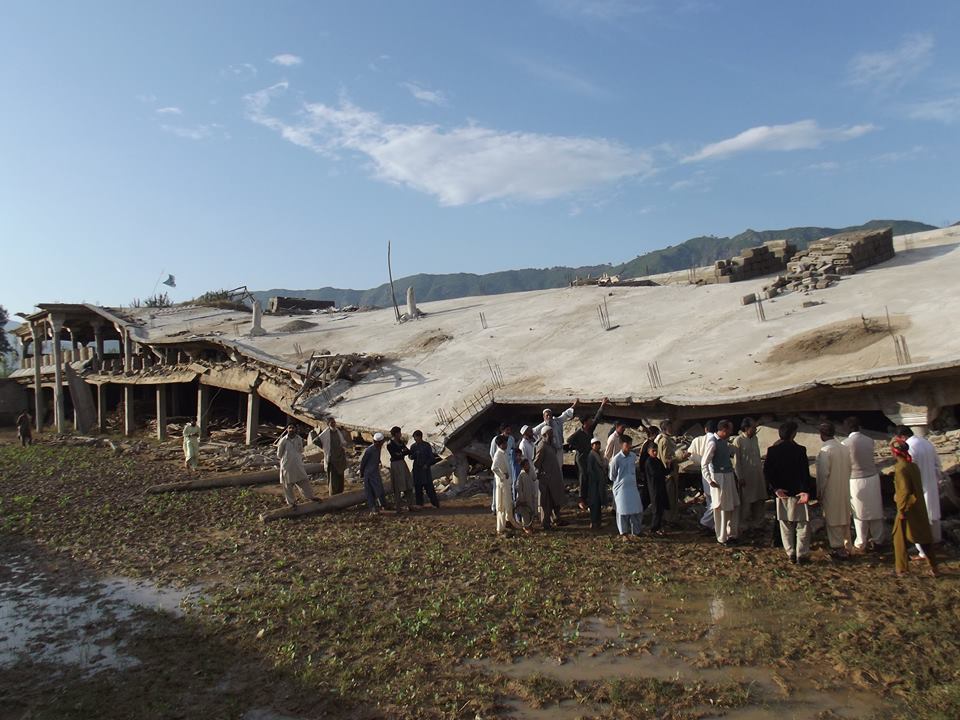 Residents of Pakistan's Dir District await aid near the ruins of a building destroyed by the October 26, 2015 earthquake. (Photo credit: Fakhar Kakakhel)

More than a week after a 7.5 magnitude earthquake shook the northern areas of Pakistan and Afghanistan, relief work has barely started. The earthquake killed more than 250 people, injured another 1600 and damaged around 40 thousand homes and buildings. More than a million people are left out in the cold of the Himalayan autumn — awaiting relief. Fakhar Kakakhel reports.

In the snow-covered peaks of the Dir District, Bakht Zamin waits with thirteen relatives for help that has yet to arrive. Zamin says his elderly father and six-year-old son died when the roof of his home caved in. He’s been staying near the rubble of his destroyed home, waiting for rescue workers to help clear the debris so that he can recover and bury the bodies. But that help has yet to arrive. He says he and his family have been forced to beg for food and shelter.

Due to mountainous terrain, bad roads, spotty communication, and extremely harsh weather relief activities are not meeting the demands of the affected population in many regional towns.

In Dalgram, the most densely populated village in the Lal Qilla Maidan district, the October 26th earthquake destroyed about 50 houses.

One of those homes belonged to a woman named Neelam. She says she hasn’t seen any evidence of the relief work the government claims to be carrying out. Neelam has been sleeping under the open sky.

“For the last three days my children and I haven’t slept for a moment due to cold weather,” Neelam says. “My children need warm clothes, food and a temporary shelter. Three of my children now have respiratory infections. You tell me, where should I go? I have heard of government statements but you can see I have no help.”

Some disaster relief authorities are present in the region – including members of the Provincial Disaster Management Authority, National Disaster Management Authority, and the armed forces – but the lack of coordination in distributing aid to those who need it most is evident. One week after the earthquake thousands of families are still waiting for basics necessities like tents and food.

Officials claim they have been assessing the needs of the affected population and will distribute financial aid to local administrators. The government has also stated that those who lost their homes or loved ones will be eligible for aid in the form of cash payments.

Locals in the affected areas told FSRN that if authorities don’t prioritize food and shelter distribution, the slow official response to the natural disaster may add to the death toll.