All photos by MP Nunan. Read/hear her accompanying report. 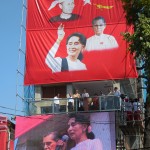 Aung San Suu Kyi speaks to supporters in Yangon on November 9, 2015, expressing optimism that the her National League for Democracy would fare well in the parliamentary election. 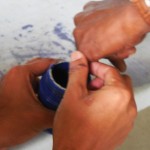 A poll worker dips a voter’s finger in indelible ink to show that he has voted. 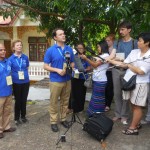 Jason Carter, an election observer with the Carter Center and the grandson of former U.S. President Jimmy Carter, speaks to media on the morning of election day. Behind him are Mary Robinson, former president of Ireland and Bhoraj Pokharel, former commissioner of the Nepal Election Commission. They are among the roughly one thousand international observers from various missions allowed into Burma to monitor voting for the first time. 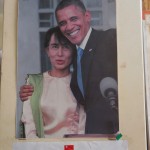 A photo of democracy icon Aung San Suu Kyi and President Barack Obama, hanging at the headquarters of the National League for Democracy. President Obama visited Burma in 2012, hailing its democratic reform process and urging Burmese to do more. 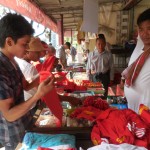 Vendors do a brisk sale of National League for Democracy t-shirts, refrigerator magnets, posters and other knickknacks, many of them bearing the likeness of Aung San Suu Kyi. 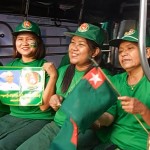 Supporters of the ruling United Solidarity and Development Party campaign in the streets of Yangon. Campaigning often involves convoys of trucks, loaded with supporters, playing music and campaign speeches by loudspeaker while driving through the streets. 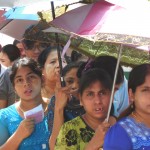 Voters wait in the sun for their turns to cast ballots in Burma’s parliamentary election on November 8th.