Historic elections in Myanmar suggest victory for democracy icon, changes for the nation 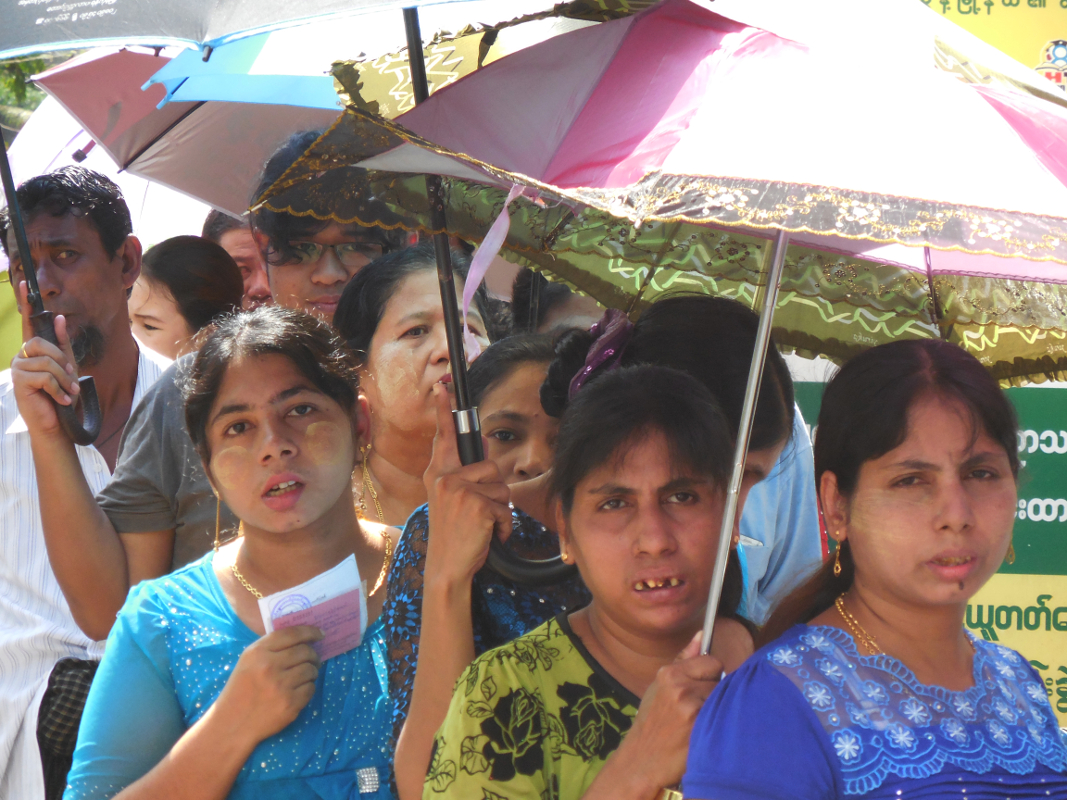 Voters wait in the sun for their turns to cast ballots in Burma’s parliamentary election on November 8th.

Early results from historic parliamentary elections in Myanmar, also known as Burma, suggest a significant victory for the party led by democracy icon  Aung San Suu Kyi. It’s the first time the country has held a national democratic vote in 25 years, raising hopes that after decades of military rule Burma may now be on a genuine path to democracy. That path is not without obstacles. The military has reserved 25 percent of parliamentary seats for itself. It will also be at least three months before a new president is elected, raising concerns that Burma’s rulers may find ways to alter the outcome of the vote. FSRN’s Patricia Nunan reports from Yangon.

The last time Myanmar’s military ruling party was defeated, in a parliamentary ballot in 1990, the generals nullified the results and put Aung San Suu Kyi into house arrest. She stayed there for much of the next 20 years.

This man, who gave his name only as Michael, was among the throngs of voters who went to the polls Sunday.

“Most of the people [are] waiting the whole night for voting,” says Michael. “It’s a good chance to change our country. I’m also worried, but this time, [it’s] different from 1990. That’s what I believe.”

Dozens of parties competed for nearly 300 parliamentary seats in the country also known as Burma’s first potentially free ballot in 25 years. But the contest is really between the government’s Union Solidarity and Development Party and the National League for Democracy, the NLD, Aung San Suu Kyi’s party.

Because the military retains 25 percent of all parliamentary seats, the NLD has to win two-thirds of seats in order to secure a majority.

Mary Robinson is the former president of Ireland and one of the leaders of the Carter Center’s election observation team here. She says that advantage kept by the military will color how the election is seen by the international community.

“We have to see this election within a framework which is not openly democratic in the full sense. And we have to record that when we assess on the 10th of November an overall balanced appraisal of the situation,” Robinson explains. “And we think that would be really very important. And we have to hope that this country is on a trajectory toward deeper democracy, and we want to reinforce that.”

Once the votes are counted, it will be three months before parliament convenes to choose a new president, raising fears that the military may try to alter the outcome of the vote.

Aung San Suu Kyi is barred from becoming president by a controversial clause in Burma’s 2008 constitution that prohibits people with foreign-born children from the post. Suu Kyi’s late husband and children are British.

But she says that if her party wins a majority, she will define and assume a post that supersedes the presidency.