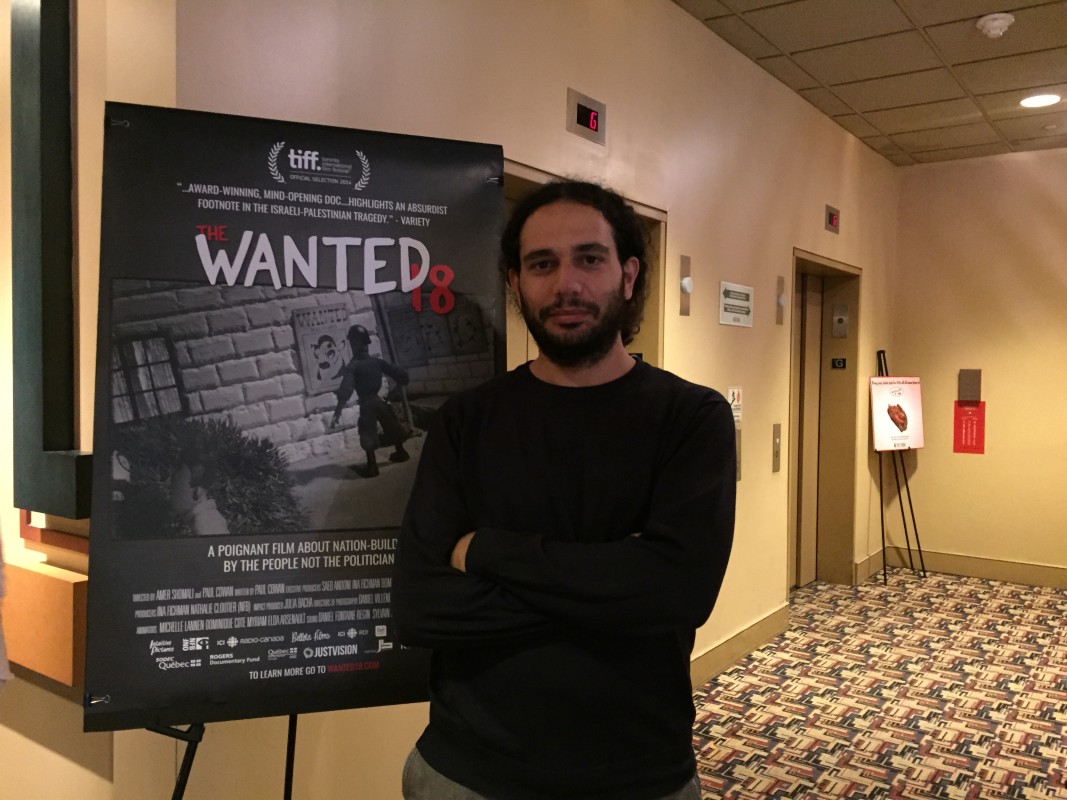 Palestinian filmmaker Amer Shomali stands in front of a poster for "The Wanted 18" at a screening of the film in Washington D.C. (Photo credit: Dalia Hatuqa)

There’s much to be said about cows, but being a security threat isn’t often one of them. In 1987, however, in a small town near Bethlehem in the West Bank, Israeli authorities targeted 18 of the animals. Their crime: being used by Palestinians to substitute for Israeli milk and achieve some semblance of independence. FSRN’s Dalia Hatuqa reports.

Dr. Majed Nassar is a physician from Beit Sahour, a West Bank town near Bethlehem. In The Wanted 18, Palestine’s submission for the Best Foreign Language Film category at next year’s Academy Awards, he recalls a time in the 1980s when his community bought a herd of cows that Israel eventually dubbed a security threat.

The animated documentary centers on the community’s determination to become independent from Israel during the first Palestinian Intifada, or uprising, and that involved civil disobedience. This included refusing to pay taxes to Israeli authorities.

The film focuses on Beit Sahour’s desire to be food independent as well – which meant boycotting Israeli goods. That’s where the 18 cows come in. The community bought a herd from a sympathetic Israeli kibbutznik, and local milk began to flow to Palestinian homes. But Israeli authorities didn’t like it one bit.

Jalal Qumsieh, who is featured in the documentary, recalls the day the cows became outlaws: “The military governor came one day with his soldiers to the barn. First thing they did there is to take a photo for each cow with its number on its body and he told us in brief that we have to remove the cows and get rid of them. When I asked him why, he said, and I quote his exact words: ‘These cows are dangerous for the security of the State of Israel.'”

Filmmakers Amer Shomali, a Palestinian, and Paul Cowan, from Britain, weave dark humor throughout a series of archival footage, re-enactments and claymation segments to show the absurdity of the situation, which eventually led to the community hiding the cows, at one point even at the local butcher’s house.

The Wanted 18 (Teaser) from National Film Board of Canada on Vimeo.

Shomali, who hails from Beit Sahour, says the idea for the film came to him when he was still a child growing up at the Yarmouk refugee camp in Syria – long before his family moved to Palestine.

“One of the comic books I read in the camp was about Beit Sahour, the civil disobedience, the cows, the tax strike … and I was very excited,” recalls Shomali. “At that time I was obsessed with reading comic books, ones with superheroes like Superman, Tin Tin, Batman, Asterix. And for me reading a comic book about my town meant a lot. It was the first time I read about super heroes who could be my relatives — my uncles, my aunts —  and that means in one way or another that I could be a superhero by blood.”

The visual artist-animator is currently on tour in the U.S. to showcase the film, which most recently debuted at the D.C. Palestinian Film and Arts Festival. For five years, the event has provided a space and an audience for Palestinian artists. Organizers say it made perfect sense to have The Wanted 18 headline the festival.

Similarly, Shomali wanted to change preconceived notions people have about Palestinians. And he wanted to do so through what he calls the ‘Trojan cows.’ He calls them that because audiences often find it easier to connect with the animals than with the Palestinian people.

“We made the film where the cows are the main voice of the film,” explains Shomali. “So if you are pro-Palestinian or pro-Israeli you will let the cows lead you through the journey. They have beautiful eyes, they are interesting characters. Through sympathizing with the cows you start to understand what it means to live under occupation as Palestinians. In the West it’s easier for audiences to sympathize with the cows than with the Palestinians, so we gave the cows a voice to represent us.”

But Aba Allouh, who watched the film, thought the use of dark humor to tell the tale of Beit Sahour took away from the serious and tragic parts of the story. “There were a lot of funny parts which kind of lost the sincerity for me,” she remarked in a post-screening interview. “I focused more on the joke rather than the actual topic. The message is sent in a simple way but the pain is a lot deeper.”

The Academy Award nominations won’t be announced for another few months. In the meantime, the filmmakers are working on French and Japanese versions of The Wanted 18 to make the movie as widely accessible as possible.