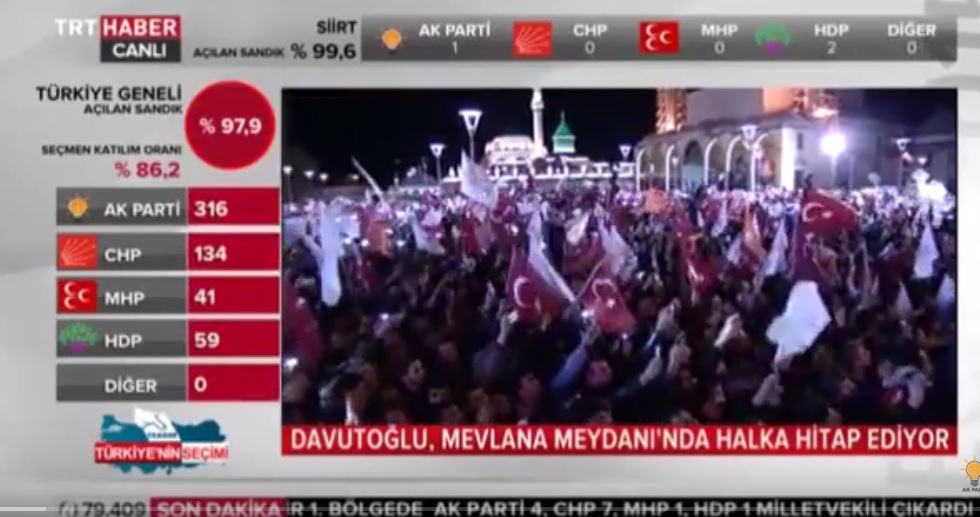 The outcome is a victory for 61-year-old President Erdogan whose limitless power ambition to create a a strong executive presidency delights supporters who see him as a working class hero battling for Turkey’s devout Muslim underclass.

His hand-picked Prime Minister Ahmet Davutoglu, mindful of the rising threat of civil war with Turkey’s restive Kurdish minority in the southeast, delivered an upbeat message of unity.

“We will never sacrifice freedoms for security,” the prime minister said to cheering throngs of supporters in his hometown of Konya, an AKP stronghold. “We will build the new Turkey together to maintain both freedoms and security.”

But secularists, minority Kurds and the left view Erdogan’s consolidation of power with suspicion, wary of rising authoritarianism. Twin suicide attacks that killed more than 100 people at a pro-Kurdish peace rally last month had caused most opposition figures to cancel campaign rallies.

Election monitors from the Organization for Security and Co-operation in Europe said the elections were mainly free and fair. But monitors did not deploy to the Kurdish-majority southeast because of rising violence.

The election results handed the AKP 317 of the 550 seats in parliament, only 13 short of the number of lawmakers Erdogan would need to call a public referendum to change the constitution to his liking.

The pro-Kurdish HDP managed to overcome a 10 percent barrier and will also enter parliament in opposition. The AKP has consolidated its victory in the parliament but Turkey remains as divided and polarized as ever even with a strongman leader like President Erdogan at the helm.