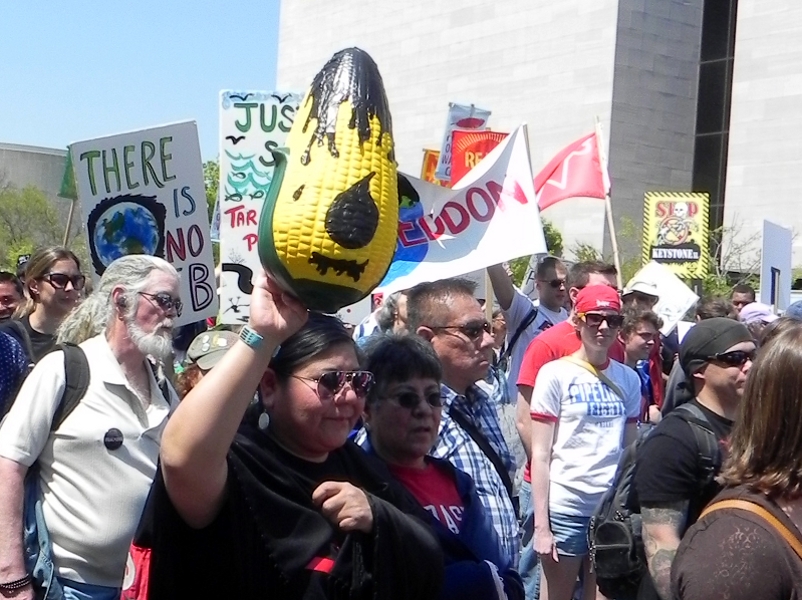 An indigenous activist holds up a representation of a corn cob dipped in oil to symbolize the damage many believe the Keystone XL pipeline would bring to their land. April 2014. (Photo credit: Alice Ollstein)

TransCanada, the company behind the proposed Keystone XL pipeline, has asked the State Department to pause the review process of its pipeline application – just as the president was expected to issue a final verdict. Tanya Snyder has more from Washington DC.

In a letter to Secretary of State John Kerry, TransCanada asked the U.S. government to put off its review of the Keystone pipeline permit application, which has been in process for seven years.

State Department spokesperson Elizabeth Trudeau clarified in Tuesday’s press briefing that the company has not withdrawn its permit application, just requested to put the review process on hold.

“We have received their letter to Secretary Kerry. We’re in the process of sending a response,” remarked Trudeau. “Our review process is ongoing.”

When pressed by reporters, Trudeau refused to state clearly if that means the State Department plans to reject TransCanada’s request.

TransCanada says it needs to put the application on hold until it can resolve some differences with the state of Nebraska, where landowners have challenged the pipeline’s planned route. Nebraska is a key site for the project, where the Keystone would link up with other existing pipelines to pump tar sands oil all the way to the Gulf Coast. But the request to postpone seems to have more to do with presidential politics than state politics.

The Obama administration was expected to issue its final decision on the pipeline as early as this week. And many predicted the outcome wouldn’t be good news for TransCanada.

Obama had rejected TransCanada’s application in 2012 when Congressional Republicans forced him to make a decision — but the company reapplied just a few months later.

The company appears eager to wait out the current administration and try its luck with the next one. All of the Republican presidential candidates support the pipeline, though Donald Trump says he would try to negotiate a “better deal” for the U.S. All the Democrats oppose it.

Keystone opponents say the pipeline is the only way to make tar sands oil profitable, and that stopping the pipeline would reduce the amount of fuel produced in a way they say is so dirty and inefficient it takes more energy to produce it than it creates.