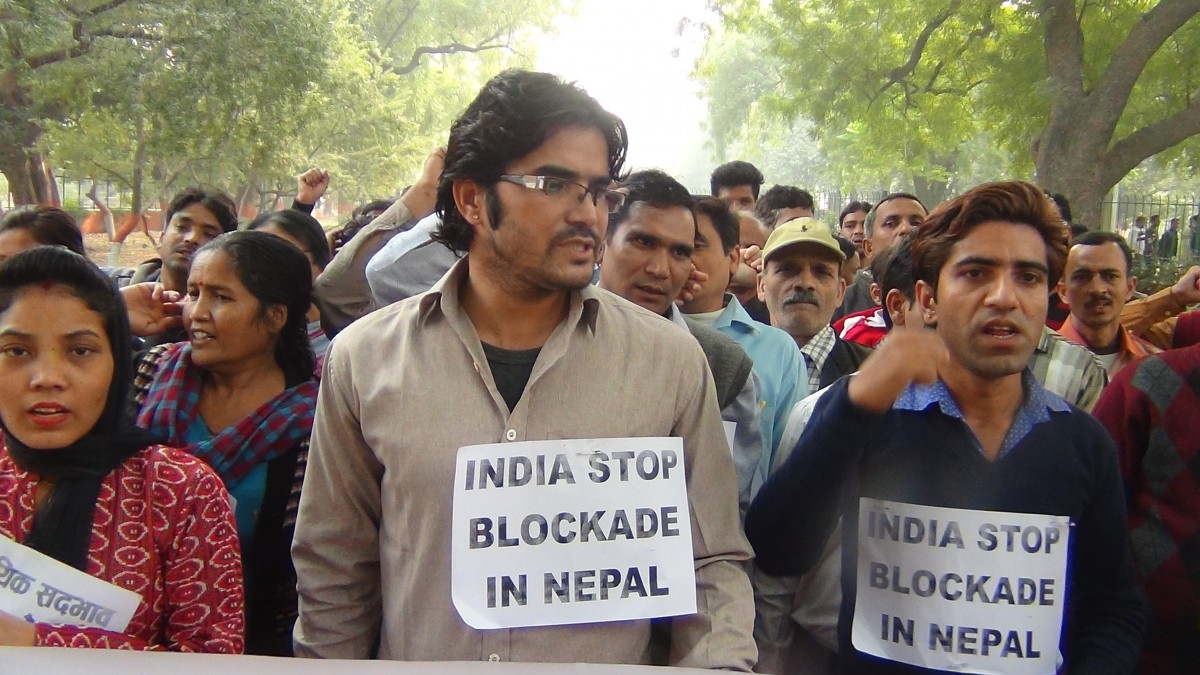 A months-long blockade at the India-Nepal border has stoked tensions between the two countries and created an acute shortage of fuel and other essential commodities within Nepal. The blockade began a few weeks after Nepal adopted a new constitution that one of the country’s ethnic minorities – Indian-origin Madhesis – say left them out of a full political transition and did nothing to reverse decades of discrimination. Nepalis blame India for the blockade, a charge Indian officials deny. Today, India’s Ministry of External Affairs gave an approving nod to a bill introduced in Nepal’s parliament that seeks to amend the new constitution in line with at least some of the Madhesi demands. While some observers welcomed this as a sign of a breakthrough, the blockade remains in place. Bismillah Geelani reports from New Delhi.

Forty five-year old Lakshmi Thapa is a domestic worker in New Delhi. She came to India last month after her husband, a truck driver in Nepal, was no longer able to continue his job due to the unavailability of fuel in the country.

“Nobody wants to leave their home but the situation over there right now is very critical. People have lost their livelihoods; there’s no oil, no gas. Everything has just stopped,” Thapa explains. “It seems as if Indians want to send us a message that Nepalese will starve without their support.”

Nepal depends heavily on supplies imported from India. But for more than two months now, all trade routes connecting Nepal to India have been blocked, leaving the country in dire straits.

Thapa joined hundreds of other Nepalese nationals who work and live in India in a protest against what they say is an economic blockade imposed by India on their country.

“India has been interfering in Nepal’s internal matters for a long time,” remarked Thakur Khanal, president of the Indian Association of People of Nepali Origin. “They see themselves as superior and want smaller countries like Nepal to bow before them and follow their orders, but Nepal is a sovereign nation. It’s also a landlocked country and, according to international law, you can’t blockade a landlocked country, even during times of war. It also goes against the long tradition of friendly relations between India and Nepal.”

The blockade began after Nepal adopted its new constitution in late September.

The constitution, the first since the overthrow of the monarchy in 2006, left some minorities feeling seriously shortchanged, especially the ethnic Madhesis who have since been on the streets voicing their anger.

Madhesis are an indigenous group of Indian origin, though large numbers migrated to the southern plains of Nepal starting in the 1950s. As a group, they retain strong ethnic and cultural ties with India. According to the 2011 census Madhesis account for 22 percent of Nepal’s population, but Madhesi groups say the real number is much higher.

For decades, Madhesis have accused the Nepali highlanders who dominate the country’s politics of mistreatment and discrimination.

Madhesh Activist Sanjeev Yadav says they were hopeful that the new constitution would alter the situation that keeps Madhesis out of government positions and the public service.

“If you look at the Nepali Army, the representation of Madhesis is just 3 percent. The same is the case with police and other services. Madhesis are qualified and meet requirements, but are turned away without any given reason,” Yadav explains. “We have a 30 percent quota in government jobs, but even in areas where we are the majority, the jobs go to highlanders who live in the area. They eat up our share of jobs because those who do the hiring prefer them. The result is that if you go to any government office, you will find hardly 10 percent of the employees are Madhesis and the rest are highlanders.”

Clashes between Madhesi protesters and Nepali police have left more than 50 people dead since protests over the new constitution began in September this year.

Proportional representation in parliament, the creation of a larger autonomous Madhesh province and an easing of citizenship norms are some of their key demands.

While India has expressed its disapproval of Nepal’s constitution – citing neglect of Madheshi rights – it denies any involvement in the blockade.

“There’s no official or unofficial blockade by India of Nepal,” says Vikas Swarup, a spokesperson for India’s foreign ministry. “We also want a resolution for Nepal’s current problems, but the solution has to come from within Nepal after consultation with their own people.”

But Prashant Jha, Associate Editor of the Daily Hindustan Times, is not convinced. Jha recently visited the border area and says Indian authorities are facilitating the blockade, if not imposing it.

“While it’s true that Madhesi protesters have blocked some routes and are not allowing vehicular movement into Nepal, the Indian security and customs officials have also tightened the border and are not allowing anything,” Jha points out. “There are many other routes through which we could have sent things as we have been doing in the past. So at least an unwillingness and non-cooperation on our part is also clearly evident.”

The blockade is now in its third month and concerns are growing about its long term impact in a country still battling the devastation of a massive earthquake that left nearly 10,000 dead and many more homeless earlier this year.

According to the United Nations Children’s Fund (UNICEF), nearly 3 million Nepali children under the age of five are at risk of disease or even death this winter if the blockade continues.

“This is a human tragedy of such proportions that the least humanity should have led to our rushing teams to Nepal to work with the Nepali authorities on finding alternative routes or on pacifying the agitators,” says Manishankar Aiyar, a senior leader with India’s opposition Congress Party. “The children of Nepal are being told they can’t go to school because India is stopping them. The women of Nepal are being told that they can’t have food, fuel, medicines and vaccines for their children because India is stopping them. We have to make it clear to the Nepalis that India is not harming them; it’s the Modi government that is harming them.”

The Indian government has agreed to send an all-party delegation to Nepal to help the Nepali authorities and Medhesi protesters reach an agreement, but has not yet set a date.

On Monday, India’s Ministry of External Affairs welcomed as a positive development a move by Nepal’s cabinet to send a bill to parliament to amend the constitution accommodating some of the demands of the Madhesi protesters. But, for now, the blockade remains in place.