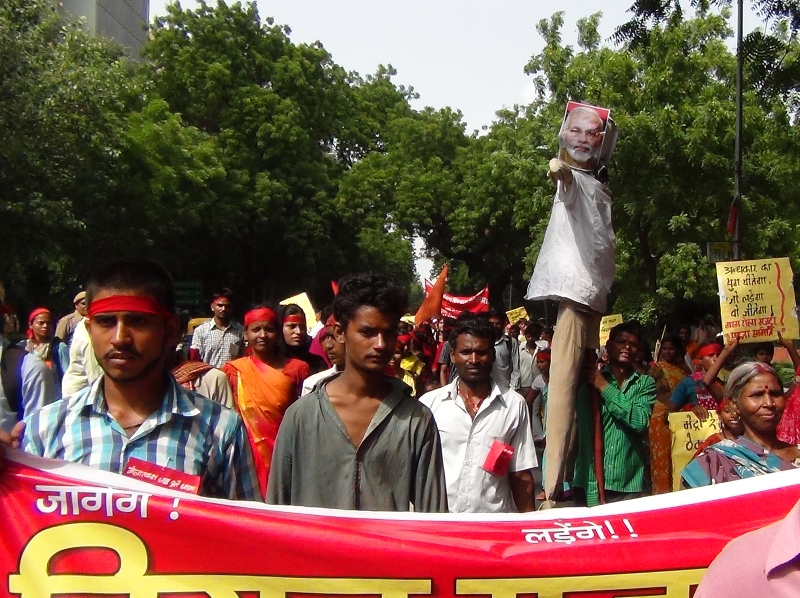 Trade Unions in India are engaged in a  nationwide campaign to fight the government’s move to amend India’s labor laws. The new administration of Narendra Modi claims the labor reforms will make doing business easier for companies while increasing benefits for workers. But trade unions say the move is an attack on workers’ hard-won rights. They say the changes are aimed at appeasing industrialists in order to prove the government’s business-friendly credentials as it completes 100 days in power. Bismillah Geelani reports from New Delhi.

Hundreds of factory workers march down Parliament Street in New Delhi, burning an effigy of Prime Minister Narendra Modi. Among the protesters is 28-year old labor activist Arvimnd Kumar, who says the Modi government “has made tall claims of bringing good days, and now it’s clear who the good days are for. It’s certainly not for the working class. We saw some of it in the government’s first budget where the corporations were showered with bailout packages, tax holidays and other benefits, and the rest of it is coming now with this attempt to curtail labor rights. The fact is Modi’s election was funded by the capitalists. They pumped in huge amounts of money and now Modi is returning the favor.”

Similar protests against proposed changes to the country’s labor laws are being held in several Indian cities. Parliament is considering more than 50 changes to India’s labor code called for by the Prime Minister’s cabinet. The government claims the updated code will benefit both workers and employers.

Ravi Vig, head of the ruling Bharatiya Janata Party – or BJP’s – Industry Cell says the existing laws “were made by the British at a time when there was mistrust between the employer and the worker, and they did not make them considering the interests of the workers.” Vig attests the labor reforms are in everyone’s interest because “the main aim of the changes is to speed up job creation. The country, industry and workers all stand to gain from this.”

The labor reforms include measures that would make it make it harder for workers classified as apprentices to sue factory owners, dramatically increase in the amount of overtime bosses can demand of workers, and exempt firms employing fewer than 40 workers from reporting requirements.

Other proposed changes seek to enhance worker safety standards and relax certain norms for women to enable them to work night shifts.  But the measure would also make it harder for workers to unionize – increasing the 10 percent vote now required to 30 percent.  Industrialists and factory owners hail the reforms as long overdue. But trade unions do not agree.

Shyam Murti, a leader of the New Delhi-based Begul Mazdoor Dasta union says the proposed reforms make worker protections currently on the books toothless. He adds that while many employers flout existing labor laws in practice, “at least we have something to fall back on” to hold employers accountable in court.

Even the trade union that is politically associated with ruling BJP is against the proposed changes.

Brijesh Upadhyaya, president of the BJP-allied Bharatiya Mazdoor Sangh trade union, says the proposed changes are “anti-labor and a hurried exercises aimed at appeasing a section of the business class.” He adds the government “has also violated the International Labor Organization’s convention that says any changes made to labor law must be made in consultation with all the stakeholders; that’s the workers, the employers and the government – but here the government has acted unilaterally with these changes.”

Parliament has not yet set a date to vote on the labor reforms. India’s trade unions are demanding the bill’s withdrawal and vow to keep up pressure in the streets. But the ruling party could conceivably pass the measure without the support of the unions, as it enjoys an absolute majority in Parliament.