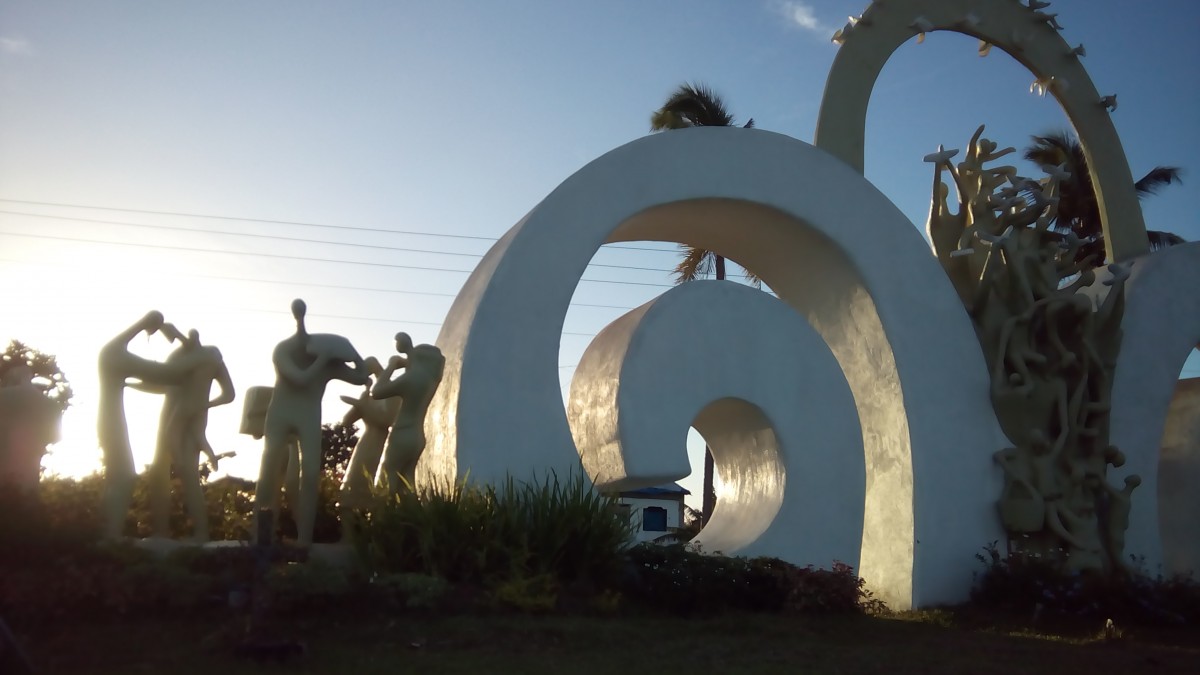 Large white sculptures and a huge cross dominate the horizon along the highway in the province of Leyte. Each marks a mass grave holding victims of super typhoon Haiyan which killed an estimated 7,500 people here when it slammed into the coast on November 8, 2013.

“Our house, which was by the road, was carried away by huge waves of sea water, which separated the members of our family,” recalls 16 year-old Norlyn Boco, one of the tens of thousands of survivors in the Visayas region. “I swallowed a lot of water but was saved by tree trunks and houses, which I held on to. I was crying hard. I lost hope and I just prayed while fighting for my life in an open space of water. One of my siblings died.”

Many in the area did not understand the full magnitude of the typhoon before it hit or have contingency plans.

In the immediate aftermath of the disaster, a theater group known as the Philippine Educational Theater Association, or PETA, went to area shelters to work with local survivors still in shock.

Michelle Calinawan recalls her first contact with the group.

“Our house was totally washed out, so we had to stay at the evacuation center. My mind was blank and I was only looking for food and missing relatives. PETA from Manila made us go through drawing and play activities to express our feelings and think about our next plan,” Calinawan explains. “I next helped in evacuation centers. I was healing while others heal, too.”

Now, PETA is using its talents to teach about prevention and disaster mitigation.

“We believe in the power of theater not only to entertain, but to also transform the community,” says Yeyin de la Cruz, coordinator of the group’s Creative Campaigns in Schools project. “So PETA first explored theater for psycho-social support and disaster risk reduction.”

The theater workshops place emphasis on heeding disaster warnings, particularly when it comes to early evacuation, and taking concrete steps to always be ready for any disaster. For example, to store important documents in a waterproof bag along with a flashlight.

When it comes to sharing experiences, they make use of drama, visuals, music, movements and creative writing.

PETA organizes workshops between local artists, students and teachers, like this one at the San Joaquin Central School.

Editha Maceda is a long time teacher here. She says 67 of more than 400 pupils perished from the typhoon, including the sixth grade graduating valedictorian.

“They enjoy and they love to move. Not like in the usual seminar that we sit down. This is the most enjoyable one,” says Maceda. “Like for example, in identifying hazards and disaster, there are pictures that they have to choose and the children now are more resilient. They are aware of what’s happening around. First and foremost, the children would remind me, ‘Ma’am it’s already signal number two, we have to go home.’”

Yeyin de la Cruz says part of healing is feeling prepared for a disaster. In the workshops, the children rehearse to explore problems and solutions.

Student Norlyn Boco, the 16 year-old who survived the storm by clinging to floating wood, is now able to sing with others and to pursue a better life.

“Now I have the courage to share and to inspire others like me, because I am a survivor,” says Boco. “I used to hide under the blanket so I wouldn’t even hear the drops of rain. Theater helped me to get over the trauma.”

And Norlyn tells the world through a song that, while there is life, there is hope to realize her dream.