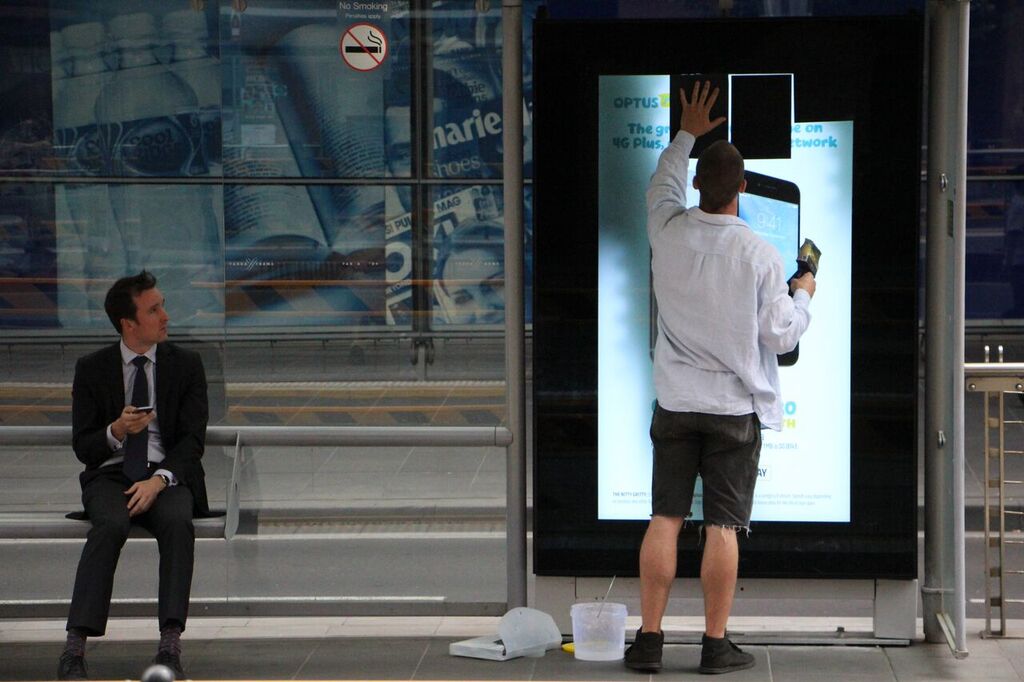 The holiday season is observed in a variety of ways. For some, it’s a time of reflection. For others, it means being able to take time off from work or school and spend time with family. But one element has become a constant: a barrage of advertising.  Many people engage in the rampant consumerism, and others tune out the ubiquitous marketing messages. But Jarni Blakkarly reports on one Melbourne man’s mission to beat back the onslaught of advertising in public spaces.

It’s two o’clock on a Friday afternoon in Melbourne’s busy financial district. Armed with a bucket of glue and hundreds of sheets of black paper, a man walks up to the electronic billboard at a tram stop. Slowly and methodically he begins pasting black pieces of paper over the ads.

Ad-busting is a form of protest that involves altering commercial advertisements. However unlike regular ad-busting, often done at night and in secret, Kyle does his out in the open in broad daylight.

After covering over the advertisement, he also posts a piece of paper outlining his philosophy and linking to his website; he isn’t hiding at all.

“Why do we accept constant for-profit advertising in our public spaces and across our media?” Magee reads from his statement. “We pay for it, we suffer it and we let it manipulate the defenseless minds of our children.”

He says authors such as Naomi Klein and Noam Chomsky helped him articulate his thinking about media and society, but he wanted to take it to the next level.

“I guess I found it frustrating that all these academics had written all these awesome books about how our media is corrupt. But they were unwilling to do anything other than publish books. That is something, but in light of the consequences I think we should be trying to do a little more than that,” Magee says.

“To engage the mainstream on this subject and not just a niche of liberal-minded people, you are going to have to start taking things into the physical realm. Start living your ideas a bit more, standing up for them.”

But standing up in public has had its costs as well. Magee has regularly been arrested and charged during his protest and has been to prison for short stints on several occasions.

His most recent hearing was at the Melbourne Magistrates Court, where he was charged with the crime of willful damage and posting bills. Recording isn’t allowed inside, but Magee admitted openly to his actions. However, he refused to do community service or pay fines, and the judge sentenced him to seven days in prison.

His friends, as well as his three-year-old daughter and her mother were in the courtroom to support him.

“Having my daughter there had a big effect on me that I didn’t expect. I got only a sentence of seven days but because my daughter was there I just looked at her and it made me want to cry,” recalls Magee.

A few weeks later and he was out of jail and out posting again.

Magee lives in squats and doesn’t have traditional employment, this protest is his job.

Out on the street, he works covering half a dozen billboards at a tram stop, as several of his friends film and take photos. Onlookers express mixed reactions.

“What do I think? He has a right to have his opinion, doesn’t he? Do you think people are going to get it though?” one man wonders. “It certainly shows a level of commitment to the stand he is taking. I don’t know if there are many people in the 21st century  prepared  to go to prison for what they believe in, certainly not in Australia.”

Another passerby observes: “I guess our world is saturated with advertising and we can’t escape it. And that’s not great — that’s not really a choice. If you want to escape advertising what do you do, where do you go? Buy your own private island?

“I mean it is freedom of speech,” she continues. “You shouldn’t go to prison for freedom of speech. It is damaging property that is in public so why should advertisers be able to pay to push their message in our faces and public citizens who are just out and about in the city, which should be their home, aren’t allowed to do the same.”

But one man disagrees. “Protest is one thing. But to do something to property that isn’t yours, that is another,” he says as he watches Magee. “I’m sure there are other ways to get your message out. People get their messages out all the time without having to do this.”

“He’s been sent to prison before for doing this. Do you think that that’s a fair response?”  FSRN asks. “Well clearly it didn’t teach him a lesson, did it? If it did, well,  he wouldn’t be doing it again,” he replies.

Another passerby agrees. “The media does what it does and he is finding his own way of doing it. But he has to find a legal way, not like this. ” she says.

But one man is impressed. “Look at the kind of advertising we get with betting syndicates and all those kinds of things. It’s just disgraceful and it they just prey on the weakness of human beings. It’s fantastic what he is doing, good on him,”  he says.

“He has actually been doing this for about ten years, and he has actually been sent to prison a few times,” FSRN notes.  “You’re kidding! That’s incredible, isn’t it?” he replies. “You can be in a bank and take people’s money and destroy  lives and this guy can make an honest assessment of society and get put in prison. It’s crazy isn’t it? That’s the world we live in unfortunately.”

The police don’t come on this particularly day and after postering over about a dozen billboards, Magee and his friends head off.

He is adamant that he will continue this protest as a form of civil disobedience, saying he can’t be himself without doing what he cares about.