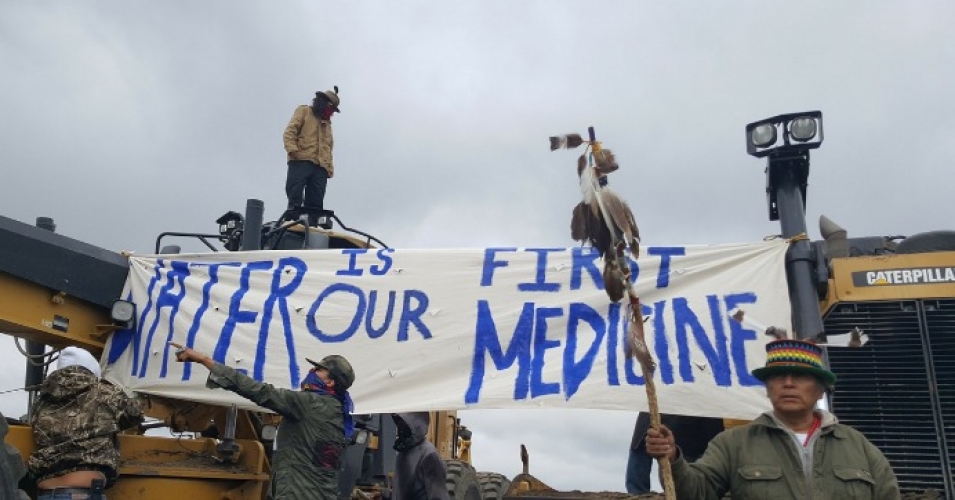 The governor of North Dakota activated the National Guard Thursday, ahead of a highly anticipated court ruling on the contentious Dakota Access pipeline construction. Nell Abram has more.

Calling it an abundance of caution, North Dakota Governor Jack Dalrymple told media Thursday he is calling in the National Guard to supplement local law enforcement in the areas surrounding the Dakota Access Pipeline protests.

“Because of the increased and prolonged need for law enforcement resources, I have asked General Dorman to make available some North Dakota National Guard personnel to support law enforcement and augment their public safety efforts,” said Dalrymple.

About 100 armed guardsmen will now staff roadside checkpoints in the vicinity of the Standing Rock Sioux reservation and nearby Sacred Stone Camp protest camp. A long-planned powwow is set for this weekend in Bismarck, and officials expect an influx of Standing Rock supporters.

The militarization of the checkpoints comes a day before the DC Circuit Court is expected to rule on injunction request that, if granted, could suspend all construction in the area. The judge issued a partial injunction Tuesday, and worked stopped at some sites while it continued at others.

Protests against the pipeline grew in early August, when heavy machinery arrived and construction began. Thousands of people have now joined the Standing Rock Sioux, and members of more than 100 tribes have sent their flags in a show of indigenous solidarity.

Protests have been largely peaceful, until a private security firm brought attack dogs to the site last weekend.

Governor Dalrymple dodged direct questions about the use of trained canines by private contractors, but did say that the company behind the pipeline project has been asked “not to escalate the situation unnecessarily.”

“The company, as you know, has stopped work and left the premises and currently has no plans to go back to work,” Dalrymple says.

A the court decision looms, Tom Goldtooth – Executive Director of the Indigenous Environmental Network – is among the thousands of people staying put at what some say is more of a village than a protest camp. Goldtooth notes that treaty rights give the Standing Rock Sioux tribe a government-to-government relationship with the U.S.

“We are not mere stakeholders – these are sovereign nations that have a relationship, a legal relationship, with the United States government,” Goldtooth explains. “And one of the foundations of that is the standard of consultation. Consultation was not recognized.”

Whatever the ruling, appeals are likely.

“The community, the grassroots – they are willing to stand up and defend their land if the federal judge doesn’t recognize the lawsuit. I think talking to people here, we are here for the long run, we’re here through winter if we have to,” says Goldtooth. “There’s people throughout the world who are looking to see what’s going on here. We’re gonna continue to build this resistance, build this solidarity, and mobilize people around the world to help us win this case.”

District Court Judge James Boasberg has said he hopes to issue a ruling by Friday.