Protests against military action in Syria and Iraq scattered and sparse 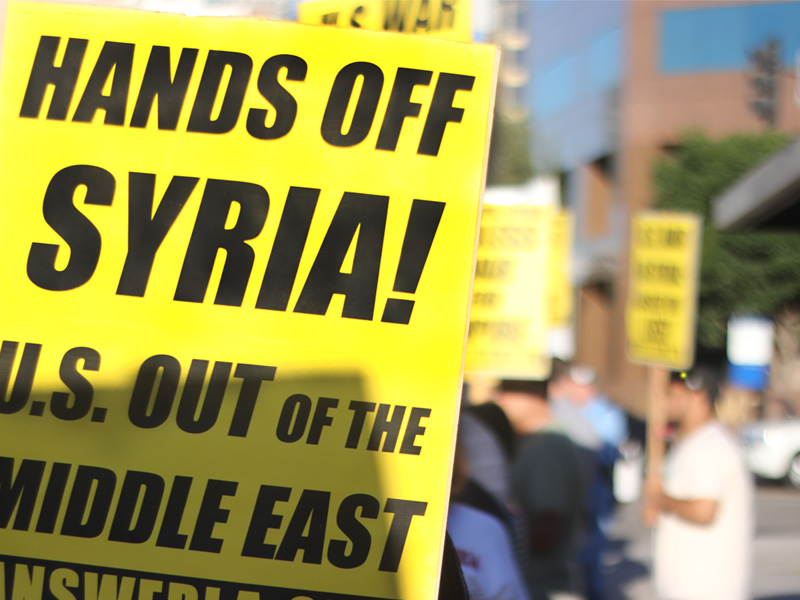 Protests against the U.S.-led airstrikes in Syria targeting the group that calls itself the Islamic State have been small-scale since the offensive began this week. Despite a call to action on Monday, events were scheduled in just 10 U.S. cities, and those that panned out were sparsely attended.  A handful of demonstrators gathered at the gates of the White House on Thursday to say “No” to military intervention in Syria and Iraq.

The contrast to anti-war actions around the country when the U.S. invaded Iraq in 2003 is stark, perhaps because the the region itself is dramatically different. Many are torn by the brutal nature of the group the U.S. has targeted.

Turnout for a protest against the new offensive held Wednesday in Los Angeles was small, but included war veterans and Arab-Americans.   FSRN’s Lena Nozizwe went to see who is protesting and hear why.

Jo Lane, Retired Public Health Nurse and Pediatric Nurse Practitioner: “I came out here to protest yet another war by the American empire, by our government, not for the people of this country I firmly believe. And we need to, in my estimation, take our money and put it into the common good for both America and the people and particularly our children.“

Hannah Zulkemi, Syrian-born activist: “I am here right now because I don’t like war in Syria. I don’t like that people killed. That’s it.”

Mike Prysner, Iraq War Veteran and ANSWER Coalition organizer: “I am here to stand in complete opposition to what the United States has done in the last month and in particular in the past week in regards to starting a bombing campaign in Syria. First of all, as an Iraq war veteran I am extremely alarmed at the rate at which US troops are being sent back to Iraq, despite promises from President Obama that there is going to be no boots on the ground, no US troops in combat. Slowly more and more troops, by the hundreds, have been approved by him and added and sent to Iraq so now there is literally 2,000 US troops in Iraq. And we’ve just learned from the chairman of the Joint Chiefs and the top generals that they are planning on sending even more regular Army troops to Iraq. And they are sending a division headquarters which is usually followed by actual division units. Not just ISIS, but all of the Iraqi militias that fought to drive out the United States and inflicted heavy casualties on US military have said, who are actually fighting ISIS currently, have said if they see any US soldiers back to Iraq that they will abandon ISIS and start fighting them. So for US soldiers and our families who just went through a horror of a decade of a war in Iraq it’s possible that we could be seeing that again. We are here to say that we are against that and I am here with several other veterans of the Iraq and Afghanistan war as well.”

Irena, Lebanese-born activist: “I am very, very upset what US is trying to do with their lies like they did in Iraq. And they are just finding a pretext for an illegal war. Just saying that we are going to go bomb ISIS but we know that is not the case because they have been behind ISIS: Saudi Arabia, Turkey, US have been supporting ISIS. They created ISIS. Saudi Arabia was one of the big funding, funders of ISIS. So how can they say they are go to bomb ISIS so this is another big pretext and lie for the regime change.”