Chilean activists protest the TPP ahead of next week’s signing 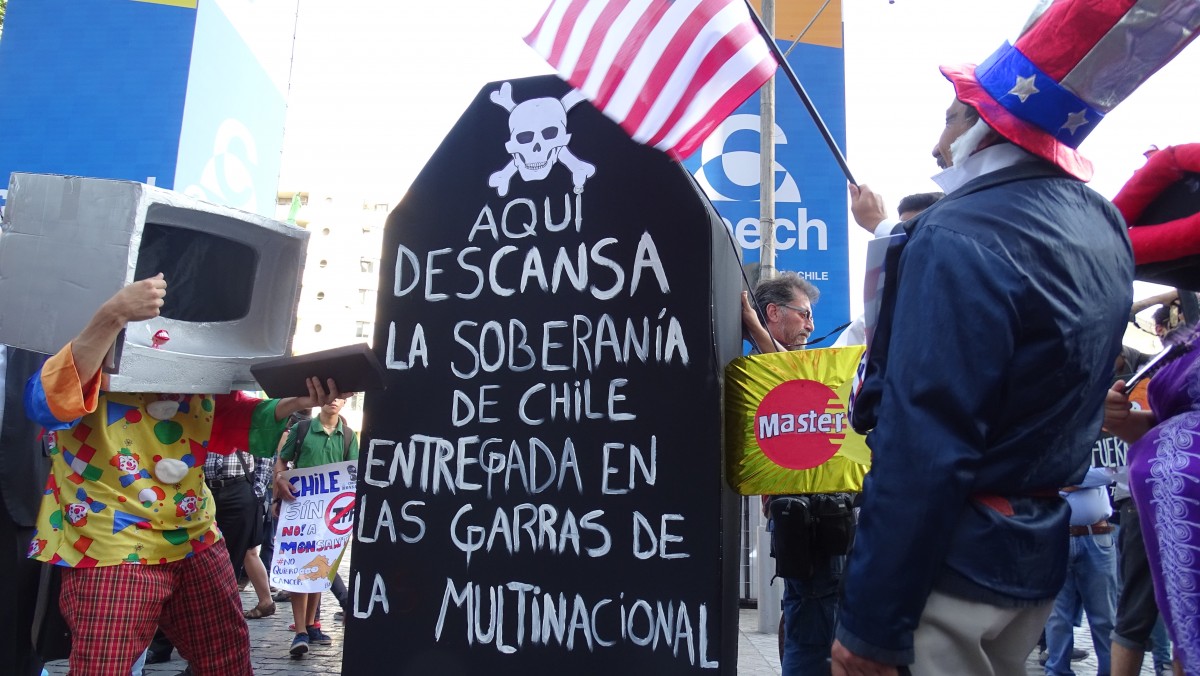 In Santiago, Chile costumed protesters performed street theater in a protest against the TPP Friday. The message on the coffin reads: "Here lies the sovereignty of Chile entombed in the claws of the multinational." (Photo credit: Matias Iturra Montalva)

Demonstrations against the TPP are growing as leaders of twelve Pacific rim nations, including the United States, are poised to sign the deal next week. Once signed, the agreement must be ratified by all twelve. Joshua Tucker brings us more from Santiago, Chile.

As the twelve TPP member-nations make plans to sign the trade agreement at a ceremony next week in New Zealand, protesters marched in eleven cities spanning the length of Chile over the weekend.

The massive trade deal was hammered out during five years of secret negotiations and will tie together 40 percent of the world’s economy. Supporters of the deal tout its protections for intellectual property rights, its reduction of trade tariffs and its provisions providing legal recourse for companies who find their profits threatened by the laws of member-nations. Opponents of the TPP say it’s a threat to jobs and wages, safe food and affordable medicine. They also caution that the dispute settlement system in the deal gives corporations and investors an end-run around the sovereign right of nations to govern their own affairs.

Claudio Escobar Caseres, a math professor, spoke as the march began, saying, “What’s going to happen is that on February 4, the president will sign this treaty with all the other member nations and Congress will ratify in March. Once the president signs, it’s taken as-is. Congress can’t change any of its contents in terms of anything – be it food sovereignty, territorial sovereignty, intellectual property rights, protections for seeds.”

Legislators and the public got their first glimpse of the thousands of pages that make up the trade agreement in disclosures made by Wikileaks. The full text was not officially made public until early November.

Last summer, lawmakers in the U.S. granted President Obama fast-track authority on the deal but, if the intense debate on that issue is any indication, an up or down congressional vote on the final agreement could be contentious. The trade agreement must be ratified by the congress of each of the twelve member-nations to take effect.