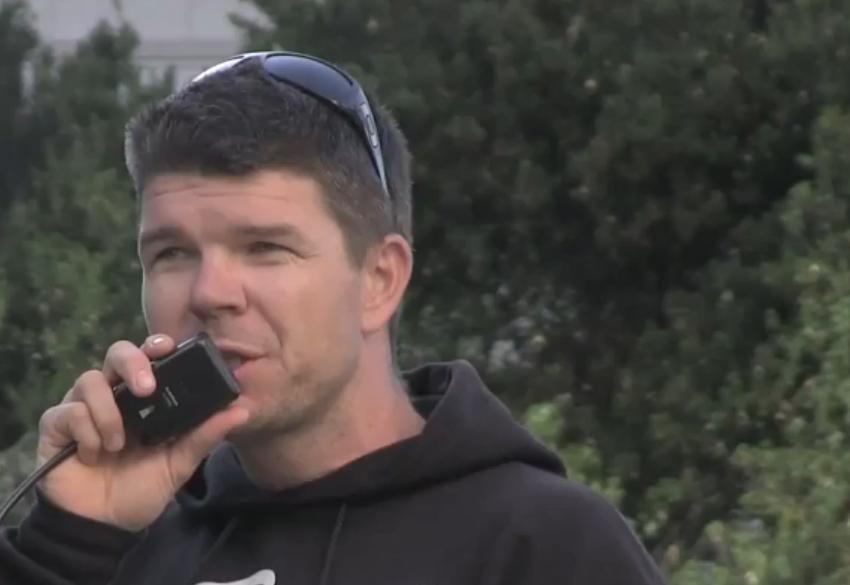 In a Washington Post op-ed, President Obama announced dramatic reforms to the federal prison system’s use of solitary confinement, including slashing the amount of time an individual should spend in solitary and abolishing it altogether for juveniles.

As part of FSRN’s profile series, in March, 2014 we met Steven Czifra. He spent a total of 16 years in California prisons; for eight of those years he was held in solitary confinement. Czifra spent four years in juvenile solitary, another four at the notorious SHU, or Security Housing Units, at Pelican Bay and Corcoran state prisons. After his release, he went on to become at the University of California, Berkeley.

FSRN’s Christina Aanestad brought you his story about how he changed his life and joined the movement to end solitary confinement.

It’s 8 in the morning and Steven Czifra is getting his son ready for school.   His life is much different today than 10, 15 years ago, when he was incarcerated in Pelican Bay’s SHU – Security Housing Unit.

“When I was in prison, I would wake up, I’d do a morning ritual that involved, you know, rolling up my mattress, cleaning my cell and just getting ready for the day. And then I would receive my, you know, crappy food through the tray slot. And then I would take it all apart and compartmentalize it and put it all away and decide what I’m going to eat when. And then I would go through my schedule, you know, whatever it was, draw for two hours, exercise, bathe, lunch, read, half an hour of T.V., read, bed. And that’s basically what I do today,” Steven Czifra explains. “I guess in all the ways that are superficial, it’s the same, and in all the ways that matter, it’s different. So, what matters? Well, for me, it’s my family, and then school. So, having a family wasn’t, ever, on my radar. When I was in prison, I didn’t have anybody, like, nobody. But my family has turned out to be, surprisingly turned out to be, something that I never wanted but has become the most important relationship that I have.”

Since his last stint in prison, Steven found a partner and now has a son. Today he views family differently than he did while incarcerated. Steven says his family of origin never even visited. He remembers growing up in an abusive environment and now sees that as a root cause of the childhood behavioral issues which resulted in his incarceration at an early age.

“Where I come from, if you’re mad at somebody, you throw boiling water on them. Or you punch a hole in the wall and move out for a week. I started out by ditching school and stealing money out of my mom’s purse, and then I found that I could steal from other people and get more money. Stores, you know, I’d shoplift and I never went to school, unless I was made to. You know, immediately when I started coming into contact with law enforcement, it was always a matter of incarceration, from the very beginning. When I wouldn’t go to school, it was, like, ‘We’re going to incarcerate you.’ When I would steal, ‘We’re going to incarcerate you.’ Everything I did, ‘We’re going to incarcerate you,’” Czifra recalls. “Looking back on it now, I can see that what we had, me being in a relationship with these authority figures, was, we had a social problem. We didn’t have a crime problem. And, really what it was, is a lack of attention on my life by a caring adult. I think we could do better, you know, as a community, as a people. I’m sorry, there are no juvenile criminals. There are just failed authority structures and failed families and failed parents, and a failed community.”

Steven was incarcerated in juvenile hall before he reached his teens for petty crimes. But he escalated into more severe crimes, like carjacking, stealing people’s cars from them with a gun. While serving a sentence at California’s prison for youth, the California Youth Authority, or CYA, Steven was uncooperative with authorities and put in solitary confinement.

“The first time I was in solitary, it was for four years. I was CYA. It’s because I wouldn’t do my homework. They threw me in solitary confinement and they were going to make me listen, they were going to make me, you know, they were going to teach me a lesson. And, you know, what is it like? Well, it’s exactly like what it sounds like. You’re in a room, you’re by yourself, you’re not talking to anybody. There’s nothing in there to keep you company, there’s nothing to stimulate you. This is during when I’m developing. This is during the most important piece of my emotional and mental development. I’m in a white room, by myself, with a book if I’m lucky. So yeah, that’s what solitary confinement is like. I did it for eight years; I did it four years as a juvenile, four years as an adult,” Czifra says. “I was put into a closet, and those closets were cells. I was put into one of those and they put a CS-117 chemical crowd-control mace canister in there with me, to soften me up. And it nearly killed me. I was drowning in the stuff. I wouldn’t give them my dinner tray. I didn’t know at the time that they were torturing me and that that was an assault. The methods of control in California Youth Authority are unbelievable.”

After he was released from juvenile detention, Steven had little support to fall back on. He ended up with a drug addiction and breaking the law again. Now an adult, he ended up in solitary confinement in California’s Pelican Bay Prison Security Housing Unit, known as “the SHU.”

“So, for me to go from there to Pelican Bay SHU, it wasn’t a big hurdle. It was a pretty natural progression, and it was really what I knew. And I didn’t really have hope for anything else,” Czifra says.

“So I was a model inmate for four years. Did everything they wanted me to do in prison. And I got in a fistfight, just days before I was supposed to parole, and the next day an officer was taunting me and I spit on him. They gave me, you know, four years for spitting and the fight. If you took one and a half steps you would be from the back of the cell to the front of the cell, recalls Czifra. “At first it wasn’t too bad, the SHU. Especially since I had already spent four years in solitary confinement, in conditions much more austere, as a juvenile. So I was already well disposed to being in those conditions. The psychological impacts are, they’re more insidious and more subtle. The paranoia and the anxiety, I trace it to being in solitary confinement. I was incarcerated for more than 16 years. It wasn’t until I left that second solitary confinement experience that I was oriented in a way, like an intense and suspicious and paranoid. But I think it’s designed that way. Your back is against the wall and your resources have been limited to the extent that you don’t have anybody else to rely on, to bounce ideas off of, or to relate to. Somebody that can say, ‘Oh, that thought you’re having? That’s crazy,’ or ‘Oh, yeah, I had those thoughts, too.’ Things like that. You don’t have any of that. You know, there’s none of that human connection.”

Steven says it was human connection, something he was denied most of his life, that ultimately helped him turn his life around. Outside of prison, at a party, he met someone he felt a connection with.

“I was 30-years-old. One guy took an interest in me, one guy took an interest in me and and said, ‘Hey, I see something in you. You might be able to do something different.’ And it was like the clouds parted, like everything changed,” remembers Czifra. “And, sure, it was after a lifetime of learning and and figuring out, ‘Oh, I really don’t like prison after all.’ And I’m seeing other people that are kind of like me, you know, drug addicts that are in recovery and finding new lives, you know, in recovery.”

Steven began a recovery journey of his own. He eventually enrolled in college and is now working on a bachelor’s degree in English at UC Berkeley. He’s part of a prison study group, and was recently named a Haas Scholar, a prestigious undergraduate research program at UC Berkeley.

Victoria Robinson, program director at the American Cultural Center at UC Berkeley, says Steven’s not just a scholar. He bridges theory with action.

“To overcome such incredible, incredible structural violence, everyday violence, emotional pain and hardship, and to not feel so angry at the world. Because his anger is, I assume, still there, because the hurt is so raw. But he’s been able to turn those emotions and those experiences into a movement, to be part of the Prison Solidarity Hunger Strike group, to think about the ways in which his scholarship can contribute to change,” Robinson explains. “The irony is that people see him as an usual Berkeley scholar. He’s the best kind of Berkeley scholar.”

“I mean, I really want to dismantle solitary confinement in this country. I think it’s being misused. I think it does have a place, there are people who do need to, for a time, be kept away from other people for safety reasons. That is not what is happening. What is happening is that solitary confinement is being used for political purposes. And this idea that there are kinds of people, there are good people and there are bad people, and that there’s this really large presence of bad people in our country and we need to make spaces for them, and some of those spaces, many thousands and thousands of beds, for these worst of the worst. And I’m here to tell you that my life today is operating in opposition to that. My life isn’t proof that it’s working. My life is proof that it’s failed,” Czifra says. “And the reason why I say that is because I’m an anomaly, coming to Cal, having a family, and having a good life after that experience. That’s not the point of that place. And, if nothing else, my experience, if not a complete, not a comprehensive argument against solitary confinement, is at least evidence to give somebody pause and start a conversation, you know, and have a public dialogue about what kind of community we want to be, what kind of society do we want to be. A society that has this kind of behavior is never going to be at peace with itself. You’re always going to have poverty, drug abuse, violence. The more of these spaces that we create, the more of this kind of experience that we’re going to create.”

Steven Czifra continues to speak out about his experiences in solitary confinement. Last year, he joined a hunger strike on the UC Berkeley campus, in solidarity with an estimated 30,000 inmates in California prisons doing the same to demand reform to the state’s use of solitary confinement.

It’s people like Steven, on the outside, who are helping to frame the issue of mass incarceration and solitary confinement as a cruel and inhumane form of punishment that needs to change. He gives a face to prison inmates who are more than just criminals to be locked away in a cell, but who are human beings with vast, untapped potential.