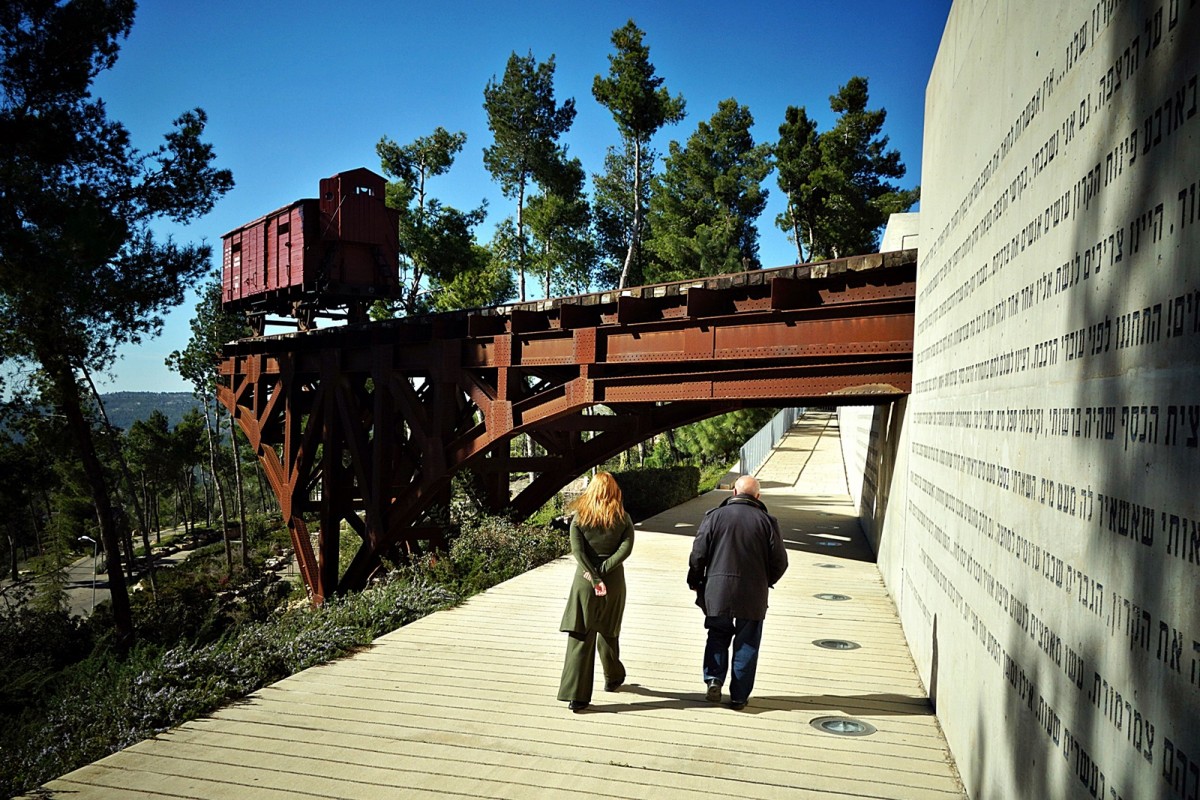 The Memorial to the Deportees at Yad Vashem. A monument to the millions of Jews herded onto cattle-cars and transported from all over Europe to the extermination camps. An original cattle-car, appropriated by the German Railway authorities and given to Yad Vashem by the Polish authorities, stands at the center of the memorial site. (Photo credit: Filip Warwick)

The Holocaust refers to the systematic mass murder of more than six million Jews by the Nazi regime and its collaborators during the Second World War. In total, 11 million people were murdered during the Holocaust, which included ethnic Poles, gypsies, Soviet POWs, communists, political opponents to Nazism, homosexuals and the physically and mentally disabled. FSRN’s Filip Warwick has more from Warsaw.

It’s winter, and snow covers the ground at the largest physical memorial to the Holocaust, the former Auschwitz Birkenau extermination camp. Of the 1.1 million people murdered here, 900,000 were Jews.

Prior to World War II, Poland was home to the largest Jewish community in Europe with a population of more than three million. Six decades later, estimates put Poland’s Jewish population at between seven and 25 thousand.

“We talk about great people of Polish culture. Without Polish Jews, Polish culture wouldn’t look the same,” Sawicki explains. “We are talking about different political groups, and many different streams of Jewish political life was created in Poland, this was the biggest Jewish community in the world.”

As early as the 12th century, religious tolerance in Poland set the country apart from many other European kingdoms during the Middle Ages and fostered the rise of the well-established, major Jewish population center. The Holocaust destroyed 90 percent of Poland’s Jewish population, and many of the traumatized survivors chose to emigrate to build new lives elsewhere.

Michael Schudrich is the Chief Rabbi of Poland. He says those survivors who remained in the country, and their descendants, have also had to contend with secondary social impacts on their communities, from Soviet occupation to gentrification-fueled displacement.

“It’s not only Auschwitz, look at Kazimierz ,the old Jewish area of Krakow. I remember when it was completely desolate, falling. It was dangerous 30 years ago to go to Kazimierz, not because of antisemitism but because of drunks and drug addicts who were hanging out and all the deserted buildings,” Schudrich recalls. “Today you can’t afford to rent an apartment. So, did they do it right or not? Clearly it was bad when it was falling down, now that it’s all gentrified and it’s the coolest place to live in Krakow it’s also wrong, well not the same level of wrong. I’m not comparing it with Auschwitz either. But it’s the struggle to find the right balance and I can say without a doubt; we are not there yet, but we’re getting closer.”

Krakow is located 150 miles south of Warsaw. From the 15th century on, the city’s historical district of Kazimierz was a major Jewish cultural and religious center.

Krakow resident Professor Jonathan Webber is a social anthropologist and a former member of the International Council of the Auschwitz Museum. He says the loss of the deeply-rooted Jewish population left an immediate vacuum in Polish society, though it wasn’t recognized as such during the Soviet occupation.

“So, when you have a genocide that takes out this population, literally removes it, you’ve got empty properties, you’ve got synagogues not being used, you’ve got cemeteries which are no longer functioning and you’ve got a huge economic hole and a gap and then you’ve got to educate your young people as to where this where all came from and why it did happen and how did it happen,” Webber points out. “And under communism, Soviet communism ,which was the dominate ideology here, the Soviets didn’t want to emphasize that the Holocaust was a specifically Jewish phenomena at all, that this was a fascist occupation run by a country which was fundamentally imperialistic was annexing Polish territory to itself.”

Dr. Michael Kagan, is an inventor and author who lives in Jerusalem. Born in the United Kingdom, Kagan moved to Israel when he was 21 years old. He is the son of a Holocaust survivor and is uncomfortable with how his father’s experience is used by current Israeli political leaders.

“Within society here is there is a very strong tension and you can see that in our political leaders, that they use the Holocaust to create anger, to create a shame that we as a people didn’t rise up and fight against it. Guilt, maybe there is collective guilt as well, but trauma, collective trauma, how do you deal with trauma?” Kagan asks. “So a lot of the right wing politics here is born from that sense of victim, and not being able to cope with it, nobody teaches how to deal with trauma.”

The memory and trauma of the Holocaust and how it is employed is an extremely sensitive subject in Israel, including among the ranks of the country’s politicians. Thirty-year-old Stav Shaffir is Israel’s youngest female Member of Parliament, known as the Knesset.

“Well, sadly only a few months ago our Prime Minister tried to change the memory of the Holocaust, by giving it, a different, newly discovered, as he may say, angle, to the source and relation to the Israeli, or the Jewish Arab relations, and made a very cynical usage of the Holocaust memory,” Shaffir says. “And I think this shameful and should never be done. It’s part of that new narrative building and the right wing in Israel is doing all the time, changing historical narratives to fit their political agenda. And this is a very risky situation.”

Shaffir is concerned about revisionist history after Israeli Prime Minister, Benjamin Netanyahu publicly accused the former Palestinian Grand Mufti of Jerusalem of convincing Adolph Hitler to exterminate Europe’s Jewish population. Netanyahu’s statements, made last October at a conference of the World Zionist Organization, sparked international controversy and prompted the office of the German Chancellor to remind the world that the Nazis were in fact responsible for the Holocaust.

Back at Auschwitz, that’s a lesson that is made clear to millions of people who visit the memorial each year. Few people who experienced the Holocaust first-hand – survivors, perpetrators or observers – are still alive to share their stories. It’s now up to their descendants, and memorials like the one at Auschwitz, to make sure subsequent generations never forget.