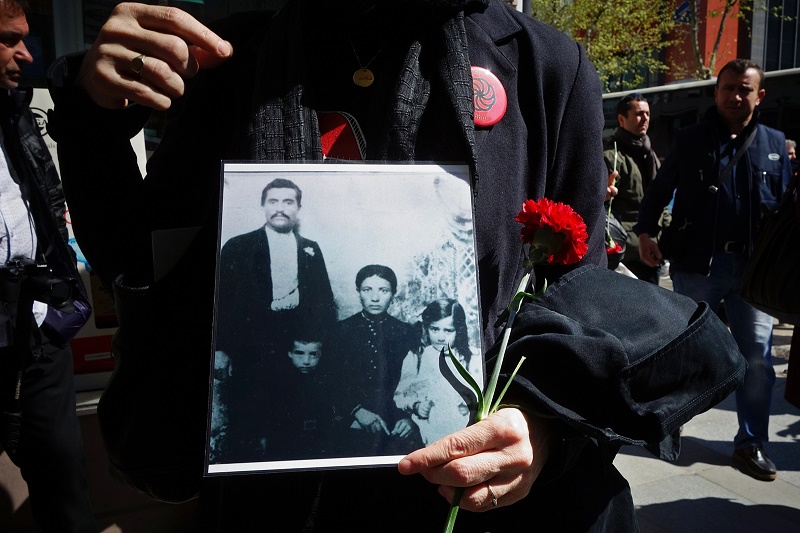 President Obama commemorated the 100th anniversary of the mass killing of more than 1.5 million Armenians without using the word “genocide” despite a pledge made during his 2008 presidential campaign. The White House’s choice of words is seen as again bowing to pressure from NATO ally Turkey which has long disputed that the 1915 events were state­sponsored ethnic cleansing. FSRN’s Jacob Resneck reports from Istanbul and the Armenian frontier where he says people are impatient for Turkish leaders to confront the past so that Armenians and Turks can repair relations.

In Istanbul – the former Ottoman capital – a nondescript residence at 87 Cumhuriyet Street is situated on a wide commercial thoroughfare.  It was here on April 24, 1915 that the sultan’s police rounded up well-known ethnic Armenian intellectuals for questioning.  Armenian militants, encouraged by Imperial Russia, had been revolting against Ottoman rule in the eastern part of the empire. The world was at war and the Russians sought to use the Armenian national cause to weaken the Ottoman Empire as World War I raged across Europe.

What had appeared to neighbors as a routine police investigation on this street was actually the first step in a state-directed program to deport and massacre hundreds of thousands of ethnic Armenians in towns and cities across the Ottoman Empire.  Stripped of their belongings and set out to march unprotected on the roads looking for safety, as many as 1.5 million people were massacred in a state-directed program to cleanse Anatolia of Armenian Christians in 1915.

A hundred years later, just around the corner from 87 Cumhuriyet Street, lives Sabuh Babikyan, a 62-year-old ethnic Armenian locksmith who lost family members in 1915 and subsequent pogroms against Christian minorities in Turkey.

“I went to church early morning and I put a candle and I pray for all people a hundred years ago,” Babikyan said Friday.  Relations on a personal level have improved remarkably in past decades.  “I have 10 Armenian friends but I have thousands of Turkish friends; I have many friends in Istanbul,” Babikyan said, yet he’s troubled by people in Turkish society who continue to deny that the genocide occurred.  “Ah, Turkish people they said everytime ‘We didn’t do anything – we never kill people. Our history is very, very clean.’ They say like this. But we know history.

And that attitude is a reflection of official government policy that denies the Armenians were systematically eradicated and has lobbied hard for the United States to refrain from recognizing the events of 1915 as genocide.

Turkish President Recep Tayyip Erdogan has made this clear in a string of speeches this month leading up to the commemoration.

“It is out of the question for there to be a stain, a shadow called ‘genocide’ on Turkey,” the president said in an April 15 speech.

Arman Duraduryan, a 42-year-old dentist of Armenian descent who works nearby. He says he’s had to get used to life as a minority in a society that encourages assimilation.

“People cannot spell my surname – I got used to it,” Duraduryan said. “But I feel uncomfortable when I have an issue with a governmental place. What will they think … especially police stations when I go to get a passport or something like that.”

The events of 1915 were never spoken about in his household. He never learned about it in school. He says the debate over how many people were killed or whether to insist on calling it ‘genocide’ is less important than facing the fact that an entire culture was nearly wiped out.

A hundred years later people are still suffering from the echoes from the past.  Turkey – the main successor to the Ottoman Empire – has no diplomatic relations with neighboring Armenia. The border has remained completely sealed since 1993 when Armenia went to war with Azerbaijan, a close Turkish ally.

Celil Ersoglu, a local Turkish tour guide, says in the early 1990s when Armenia broke away from the Soviet Union there was initial optimism and investment.

“Then after closing the border everybody left and nothing happened and the younger generation is now running away,” Erdoglu said.

Armenian and Turkish villages are in sight of each other. But it takes a 140-mile detour through the country of Georgia to reach settlements just across the river.  On the Armenian side villagers echo the complaints of their Turkish neighbors, crushing rural poverty exacerbated by a sealed frontier.

The Armenian village of Anipemza lies in the shadow of Soviet-era watchtowers. 32-year-old Kristina shows her garden of tomatoes, cucumbers, onion, cabbage and parsley. There are seven people to feed in her household, all are unemployed. She blames the closed border for hurting job prospects.

“If there was work here people wouldn’t be leaving to other places or other cities or going abroad in order to make money,” she said.

At the nearby school, pupils are rehearsing patriotic songs and making other arrangements to commemorate the 1915 genocide. 44-year-old school teacher Vardhui Ghazaryan from the nearby border city of Gyumri says Armenian people will never forget the genocide. But that doesn’t mean this should keep people divided.

“We don’t forget this genocide, for me I think I am fourth generation. But I don’t forget and I have to remember this great tragedy,” Ghazaryan said. “But if we are friendship with (Turks) – okay we don’t forget, but we can be in a relationship.”

Turks and Armenians along the border express hope that after tensions about the genocide commemoration subside, their national leaders will reopen talks which have been stalled since 2009.

There are thousands of years of shared history. But enmities stemming from the crimes of the 20th century make dialogue difficult.