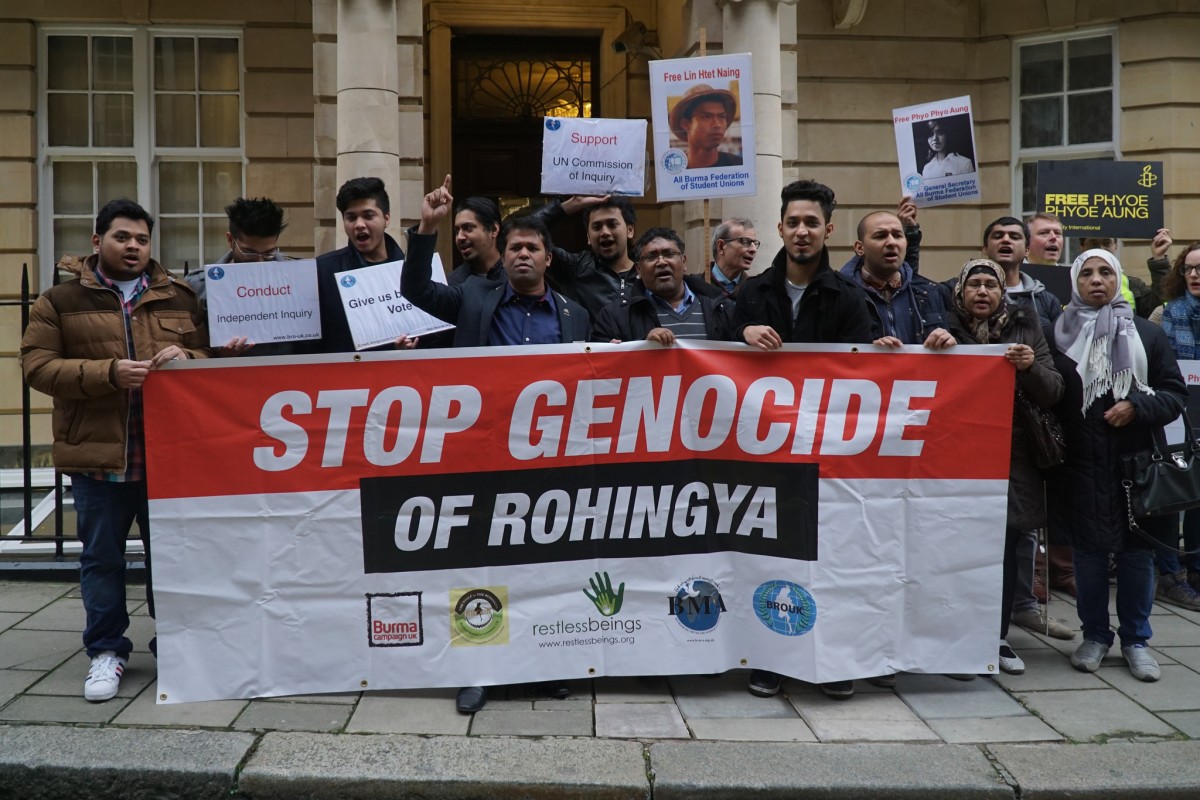 In Myanmar, the political party led by democracy icon Aung San Suu Kyi is claiming a historic win in parliamentary elections held Sunday. The vote tally is slow, but President Thein Sein has sent congratulations to Suu Kyi on what looks lie a landslide victory. The polls are seen as a test of Myanmar’s democratic reform process, which began in 2010 when Aung San Suu Kyi was released from nearly 20 years of house arrest. It was while in house arrest that she won the 1991 Nobel Peace Prize for standing up for democracy and human rights in the face of Myanmar’s brutal military dictatorship.

A darling of both the Burmese people and the international community, Aung San Suu Kyi has nonetheless seen her image tarnished in recent years by what many are calling her failure to speak out on an issue of human rights: the persecution of Myanmar’s Rohingya minority.  FSRN’s Patricia Nunan bring us a closer look.

It’s hard to encapsulate the impact Aung San Suu Kyi has had on Myanmar.

She’s the daughter of the man many call Burma’s founding father, Aung San – who was assassinated in 1947, shortly before the country won independence.

She’s the academic turned activist, whose party, the National League for Democracy won 1990 elections by a landslide, only to see Myanmar’s military leaders nullify the results and place Suu Kyi under house arrest.

She’s the Nobel Laureate who at any point during her close to 20 years in house arrest would have been allowed to leave Myanmar – to live in exile – but refused to do so.

But now she’s becoming known as a leader who has refused to act in the face of what some are calling genocide.

It used to be so dangerous to say Aung San Suu Kyi’s name during the decades of military dictatorship, many referred to her simply as “The Lady.” But now to many, she’s conspicuous by her near silence on the issue of violence against ethnic Rohingya.

“It’s very sad, The Lady has been talking about the rule of law her whole life as an activist, but unfortunately she has not done anything against the atrocities against the Rohingya and the Muslim,” says Khin Maung Myint, the Vice President of Myanmar’s National Democratic Party for Development. He charges that Suu Kyi has kept quiet in the face of genocide just to win votes.

In 2012, Buddhist extremists launched a campaign of violence against ethnic Rohingya. They say the dark-skinned and Muslim Rohingya are Bangladeshi, and not a part of any of the official ethnic groups recognized by Myanmar law.

Scores of Rohingya were killed while tens of thousands of others were forced into internment camps in northern Rakhine state where many still languish today.

Conditions are so bleak that since 2012, up to 120,000 have tried to leave Myanmar by boat, often falling prey to people smugglers. At least 8,000 have died at sea, according to the United Nations.

“The Lady tried to keep quiet herself by not taking any side,” says Myint. “She always said in her interviews, ‘If I talk about one group, the other group will misunderstand me, or accuse me of taking sides.’ Actually, that’s not the way it should be. You have the courage to say what is right and what is wrong, but she is very much after the votes of the majority Buddhist people.”

The genocide question is a contentious one. It requires that one prove intent on the part of one group to destroy another. But according the human rights group Fortify Rights, the evidence is there and they are calling on the United Nations Human Rights Council to launch an investigation.

“So examining the case law, and the examining the facts before us, we found persuasive evidence that the intent element of genocide was present,”  explains Motola.

When the question of genocide against the Rohingya was put to her directly at a recent press conference, Suu Kyi dismissed it.

“All those who have good will towards this country should remember that there is a Burmese saying – you have to make big problems small, and small problems disappear. It’s not a question of trying to exaggerate small problems into big ones, and big ones to an extent that they are totally unmanageable. I’m not saying that this is a small problem,” said Suu Kyi. “I would promise everybody who is living in this country, proper protection in accordance with the law and in accordance to laws of human rights.”

The debate about Suu Kyi and the Rohingya is causing genuine confusion among her admirers, and concern among observers – both local and international.

Some speculate that Suu Kyi is playing the long game: if she wins power from the military with this week’s parliamentary election, they say, she’s going to fix a lot of things, including the Rohingya issue. Others dismiss that idea.

“It’s impossible to know what’s inside Aung San Suu Kyi’s brain, but she has shown no sympathy and no concern for the Rohingya,” says Brad Adams, Asia Director of Human Rights Watch. “She’s at most said that the answer to this problem – which is ethnic cleansing according to Human Rights Watch, and genocide according to other people – is for there to be the rule of law. But when asked about what that means practically and how that’s going to protect anyone, she has no answer. It’s just a mantra. It’s empty rhetoric. I mean, being in favor of the rule of law is like being in favor of motherhood. It means nothing.”

For the time-being, Myanmar – and the population of roughly one million Rohingya – are only facing more uncertainty.

Early results suggest a landslide victory for Suu Kyi’s party, so it will have the right to choose a new president.

But parliament won’t convene until January 2016 – and the process by which a president is chosen may not take place until March. There are still concerns Myanmar’s military may get cold feet about democracy and seek to change the outcome of the vote.

Aung San Suu Kyi may also be tempting fate. Myanmar’s constitution, written by the military, bars her from becoming president. But she has said if her party wins, she will assume a post that outranks the president. The move may irk Myanmar’s still powerful generals.

Only after up to six months of political horse-trading will Myanmar’s government start to enact a new agenda. For now, it seems the Rohingya and the question of genocide are not likely to be on it.