Today is World Wetlands Day. Established under the Convention on Wetlands of International Importance, especially as Waterfowl Habitat, the day aims to highlight the importance of wetlands to more than one billion people worldwide who depend on them for their livelihoods. The treaty that designates the day is more commonly referred to the Ramsar Convention, and 169 countries are signatories.

One of those countries is Bolivia, whose second largest lake has dried up to little more than a puddle of water. A combination of factors over the course of a decade led to the lake’s demise, mainly nearby mining activities, climate change, and an El Niño driven drought. The consequences of this phenomenon are affecting indigenous communities living along the shores of the former lake and dozens of other families that depended upon fishing for their livelihoods.

Experts say lake recovery could take upwards of ten years, if authorities decide it’s a priority. Meanwhile, they recommend the implementation of alternative projects to prevent the mass migration of families that depended on the lake for their subsistence. FSRN’s Aldo Orellana López reports from Oruro, Bolivia. 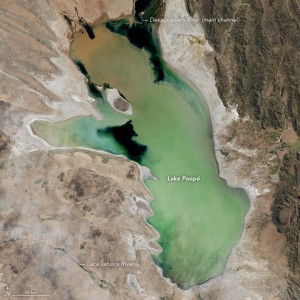 The surface area of Lake Poopó, once Bolivia’s second-largest, used to span more than 900 square miles in the department of Oruro in the country’s highlands. Now the lake is gone.

Simiano Valero is a traditionally-elected leader of a group of indigenous Uru Murato communities along what was once the lake’s Western bank.

“The lake is something that is very important to us. It was part of our territory. It was our source of work. The lake was life for us,” Valero explains. “From the times of our ancestors, we’ve been hunting, fishing and gathering. That’s why they call us, the Uru people, Men of the Lake.”

Lake Poopó is connected to its larger counterpart, Lake Titicaca, by the Desaguadero River. Together, they form part of a closed system basin with a fragile and biodiverse ecosystem. Lake Poopó was declared an ecological reserve in the year 2000. Two years later, it received recognition as a Ramsar site, part a UN-backed initiative to conserve and protect wetlands of international importance.

But in recent years, the lake, and the ecosystem it sustained, has deteriorated.

Limbert Sánchez, general coordinator of the Center of Ecology and Andean Peoples, says a variety of factors are behind the lake’s decline. 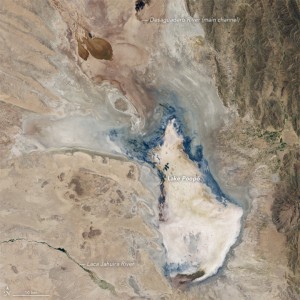 “We believe that pollution from mining has played a role. Another problem is sedimentation: the equivalent of around 200 dump truck loads of sediment enter the lake each day, including sand and mining waste. The lake is now practically flat. When water does arrive, it’s only get to be about a meter deep at most,” Sánchez points out. “It’s also been very hot, which is another problem: climate change. That is to say, climate change has been greatly accelerating the rate of evaporation and the lake’s death.”

Sánchez says official neglect in the face of a slow-motion disaster only sealed the lake’s fate.

Oruro has been home to mining operations for centuries, though the activity has intensified in recent decades. Sánchez estimates more than half of the 23 tributaries that feed Lake Poopó carry untreated mining waste. Environmental authorities do little to prevent sediment and tailings carrying heavy metals like cadmium, zinc, arsenic and lead from flowing to the lake bed.

Local grassroots organizations have for years been attempting to call wider public attention to the issue, without much success. In November of 2014, an estimated 3 million dead fish washed up on the shores of the lake. The state-level government declared the area a disaster zone and passed a law to respond to the emergency. But it was too late to take preventative action.

A year later, in December of 2015, the lake almost entirely disappeared. Only a fraction of one percent of its original surface area remains. The lake’s disappearance affects an estimated 700 families along the shoreline.

“The lake as totally dried up. We can’t live like this. How are we supposed to raise our kids?” asks Alejandrina Alvarez, a resident of the indigenous Uru Murato community of Vilañeque. She fears townspeople will eventually have to migrate to survive. “We lived off the lake, off the fish and the ducks and flamingos. But now there’s nothing because it hasn’t rained. We also sewed crops, but everything is dry. That’s why some of our brothers have left to find work. There’s nothing here now.”

Juan Toronila, the leader of a local fishermen’s cooperative, echoes the call for economic projects to give jobs to the now unemployed.

“We fishermen have been hard-hit because we’ve been without work for a year and we’re really feeling the economic effects because we really don’t know how we’re going to subsist,” says Toronila. “We need to have some sort of employment option because what we had to sustain our livelihoods and our families is gone. Just imagine – if there’s no work this year, kids will drop out of school, people will migrate and the impacts will be much broader.”

The central government estimates lakes restoration could cost up to $130 million and has asked the European Union to invest 30 million euros in the restoration project.

Environmental researcher Limbert Sánchez says recovery would take at least 10 to 20 years and would require dredging tributaries and strict administration of regional water resources. Other scientists are even less optimistic, pointing to vanishing glaciers that used to feed upstream Lake Titicaca.

Meanwhile the hundreds of families along the shores have more immediate concerns and wonder if jobs will arrive soon or if they will become part of a mass exodus from their ancestral homelands.