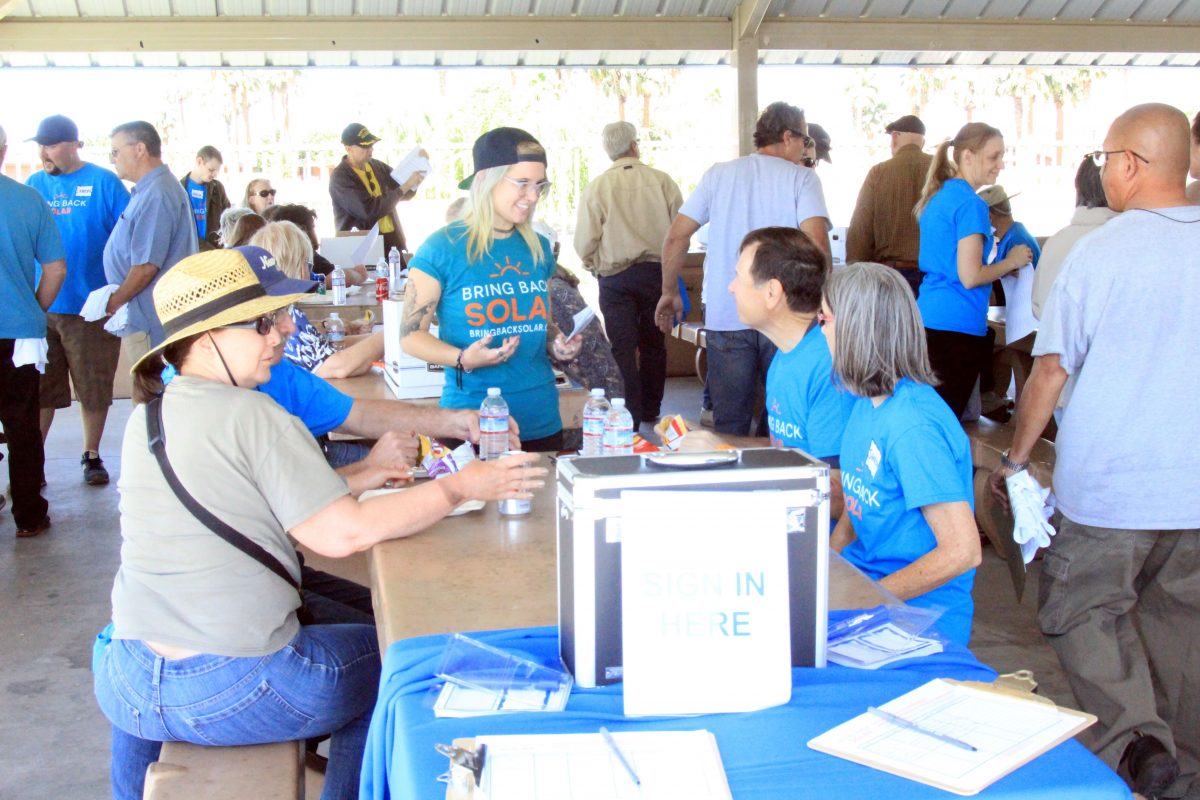 A Bring Back Solar event in Nevada last month was used to collect signatures for a ballot initiative that would undo the PUC's decision to end net metering. (Photo credit: Bring Back Solar)

In Nevada, one of the sunniest states in the U.S., the rooftop solar industry that was thriving only a year ago is effectively dead. It was killed in a controversial decision by the Nevada Public Utilities Commission to strip away incentives for homeowners, making rooftop solar prohibitively expensive. Solar advocates are fighting back in the courts and the ballot box, but they face an uphill climb. FSRN’s Larry Buhl has more from Las Vegas.

“Big rooftop solar companies say they just want energy choice for Nevadans. The truth is their plan gives you no choice,” says a commercial now airing in Nevada, paid for by a Political Action Committee called Solar Energy Fairness. Multiple sources link the PAC’s funding to NV Energy, the public utility that supplies much of Nevada with electricity.

Solar advocates say the ads hammer extra nails in a coffin, after the state’s Public Utilities Commission decimated what was a burgeoning rooftop solar industry by slashing customer incentives in December.

“What they’re trying to do is divide the rate payers,” says Frank Rieger, founder and president of Las Vegas rooftop solar company Sol-Up, one of the few remaining rooftop solar companies left in Nevada. “They say the non-solar ratepayers are basically paying for the solar ratepayers, so subsidizing the solar system owners. Exactly the opposite is true. If there wasn’t any solar anymore here in Nevada, then the utility could raise their rates by their discretion. They could do whatever they want. Solar is the only guarantee to the non solar ratepayers that their prices will remain stable.”

In December, the Nevada PUC pointed to a cost shift study that alleges solar customers don’t contribute enough to power grid maintenance, and they used this study justify ending the practice of net metering. That’s where solar customers bank credit for excess electricity that goes into the grid during the daytime, and lets them pull out the same amount of energy after sundown — a kilowatt for kilowatt exchange. Solar customers that didn’t generate enough electricity to cover their household needs would pay NV Energy for the difference.

Net metering was a significant source of energy bill savings for customers like Judy Treichel. She and her husband invested nearly $9,000 after tax incentives for solar panels four years ago. She says the most infuriating part of the PUC’s decision is that it allows NV Energy to sell them energy they generated at a huge mark up.

Other independent studies that have refuted some of the PUC’s cost shift conclusions, stating that solar customers connected to the grid are paying their fair share.

Some advocates say the fix was in on the solar industry when NV Energy was purchased by Warren Buffett’s company, Berkshire Hathaway, in 2013 for 5.6 billion dollars.

Buffet is on the record saying, “Owning a utility isn’t a way to get rich.” Solar advocates say what Buffet could have added was, “Unless the utility is a monopoly and you control new revenue sources.” In this case, the revenue source is solar.

Scott Shaw is director of research and commercial development for the Go Solar installation company in Las Vegas. He says an increase in solar customers reduced energy demand in the past few years and made the utility look another revenue stream.

“When you have a bunch of rooftop solar that is putting out solar during peak demand times, NV Energy will find it very hard to justify generation stations or new solar fields in the desert, and transmission to support it, when they go to the PUCN to ask for all this money to do those things,” Shaw points out. “That is where any utility makes their most revenue, is building generation facilities and transmission lines.”

Louise Helton is the owner of One Sun Solar Electric in Las Vegas. She says the PR campaign is more about Nevada Energy wanting to control the solar industry, rather than trying to kill it.

“With just a very small footprint of big solar fields out in our desert, we could power the entire country,” Helton says. “If they can secure this, it will be low cost energy that they will be receiving, because all of their raw energy will be coming from the sun, which is a free source, that they will capture and sell to everyone else.”

But the main casualty in the war for control of solar has been the rooftop solar industry, which is dominated by small entrepreneurs. In 2015, the Solar Foundation reported over 8,000 jobs in solar in Nevada. The state ranked number one in solar jobs per capita in the U.S. 2016 will look very different.

Battles over solar are heating up in other states. Though solar advocates recently preserved incentives in California, a struggle over residential solar incentives has started in neighboring Arizona.

Nevada’s remaining solar companies and allies are now trying to put a measure to restore net metering on a ballot initiative. But if voters pass it in November, the solar industry and customers won’t see any relief until next year at the earliest. They say the anti-solar PR campaign shaming solar customers as energy freeloaders is also making it harder to collect signatures for the initiative.

There is one wild card: battery technology. Experts say the price of battery storage will become attractive for energy-generating households within the next year. With cheaper storage, solar users could disconnect from the grid completely. And in sunny Nevada, that might be what worries the energy utility most.