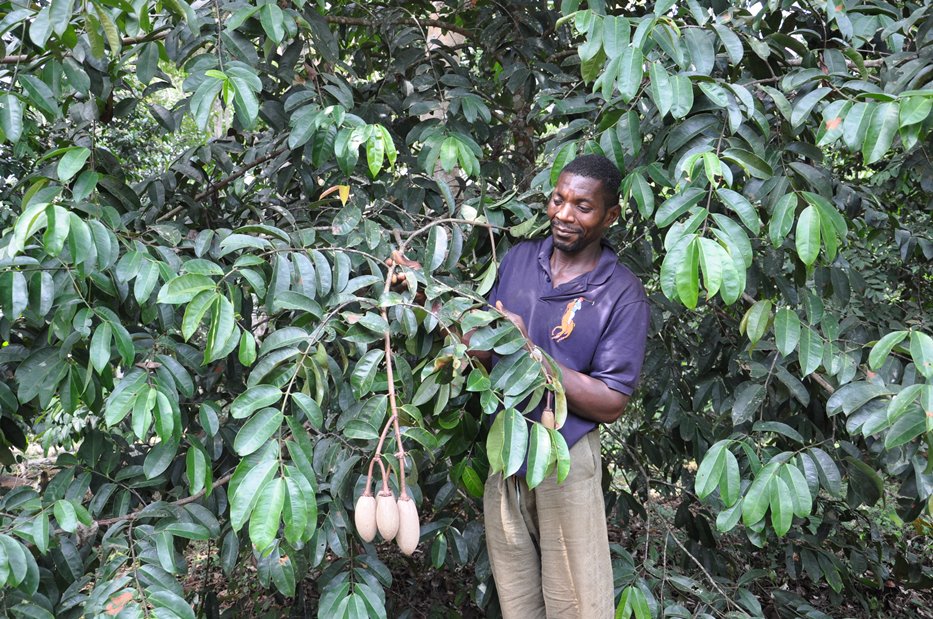 A farmer inspects a tree on an experimental farm. (Photo credit: Ngala Chimtom)

A group of farmers in Nkenglikok, a small village about 30 miles from Cameroon’s capital Yaounde, welcome officials from the World Agroforestry Centre, or ICRAF, with a song. The organization introduced agroforestry practices here ten years ago with a pilot project that has since proven itself to be successful.

Agroforestry is a system of intensive land management that integrates fruit trees and crops on the same land for the purpose of optimizing the benefits of their biological interactions.

“With the integration of improved fruit trees in the farming system like plum, mango, pears or plantains, farmers now can be able to harvest some of these fruits while waiting for coffee that they don’t even eat, they only see people coming to carry it to a market,” explains Kuh Emmanuel, who used to farm mostly cocoa and coffee for market sale, as well as vegetables for family consumption. He says the integration of fruit-trees into his field has helped to stabilize and vary his income.

“Farmers in the domain of agroforestry have a stable lifestyle because the fruit trees integrated and medicinal plants cause them to harvest throughout the whole year, rather than waiting for coffee that comes only at the end of the year,” says Emmanuel. “When I started, I was doing mainly gardening, growing vegetables without integrating as much fruit trees. By the time that we got the technology in grafting, marketing, rooting of cuttings, we had now to start planting on our farms and now we have plums, mangoes that are already producing; and I would say that that has generated income ten times what we used to have.”

Most of the trees inter-cropped here are non-timber, fruit-bearing varieties. Dr. Zac Tchoundjeu, Regional Coordinator of ICRAF for West and Central Africa, explains the intent of the program from its beginnings.

“We started from scratch. The thing we did was to see that, okay, this farmer has land; he is based in the rural area and then he is keen to accept new technology,” says Tchoundjeu. “We brought the approach of tree domestication, we taught him how to do tree domestication; we initiated the nursery, but we never do all the work for the farmer. We empower him with the techniques and then we accompany him. Because if you come and build everything, the day your project will stop, everything will fall apart and this is what we are avoiding.”

The World Agroforestry Center estimates over one hundred thousand farmers across Cameroon are already drawing benefits from the methodology. Dr. Tchoundjeu says it is part of a larger strategy to conserve the Congo Basin rainforest: “I don’t see why a farmer should protect the forest just because they are talking about that climate change is coming, there is a problem with flooding and so on. ‘So what?’ the farmer will ask you. But if you tell him, by planting the improved material, he will harvest it in three years’ time, he will diversify the source of his income, he will start listening to why this ecosystem should be protected.”

The Congo Basin rain-forest is home to a huge wealth of biodiversity. Spanning some 410 million acres, the forest is shrinking under the weight of logging and mining as well as clearing for agricultural purposes. The World Wide Fund for Nature, also known as WWF, estimates that the forest could lose two-thirds of its size, if current trends continue.

“If we sit and look at it broadly, we may think that the forest is still there,” says Hanson Ndiforti, country director for the WWF. “But if you use some scientific information, like satellite images, you will see that the forest is disappearing, and the impact will be enormous to us. The Amazon and the Congo Basin Forest are really the lungs of the earth. And it’s the responsibility, not only of Cameroon, not only of the countries of the Congo Basin, it’s a responsibility of the whole world to protect this forest.”

Ndiforti agrees that local populations can be weaned away from destructive farming practices through agroforestry techniques that have the potential to restore at least parts of the Congo Basin Rain-forest, but also insists that the big polluters should take a leading role in paying for the effort to keep carbon in trees.

It is a position Africa adopted during the Paris Summit on Climate Change. According to the Pan African Parliamentarians’ Network on Climate Change, world leaders pledged $100 billion to create a fund to combat climate change, especially in countries that pollute the least, yet suffer the harshest consequences. Whether or not rich countries will keep their promises and take meaningful action to put the brakes on climate change remains to be seen.