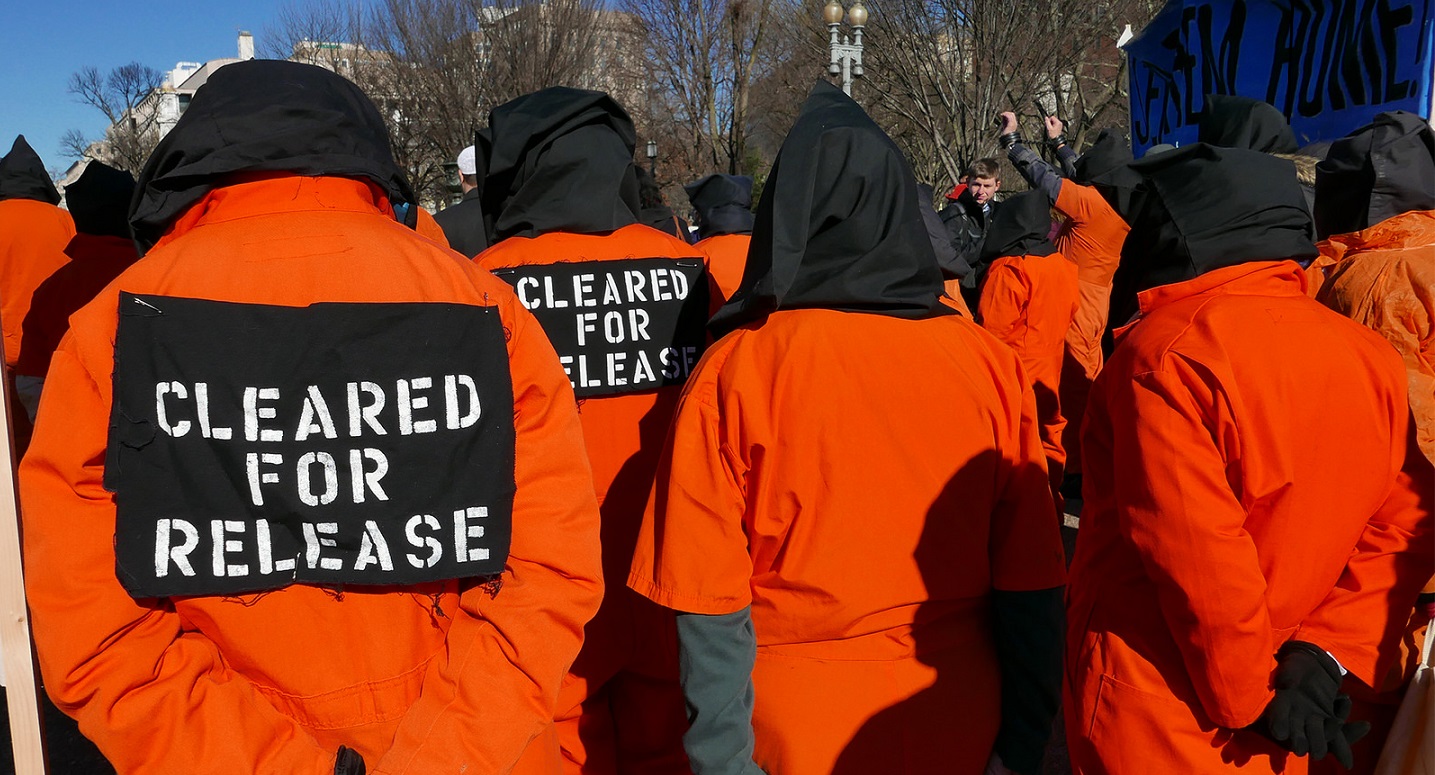 Washington DC, January 11, 2016. In a yearly event in front of the White House activists gather to call for the closing of Guantanamo and an end to torture and indefinite detention. (Photo Credit: Susan Melkisethian via Flickr / Creative Commons)

Editors Note: This story was updated Friday February 26, 2016 to update the number of detainees currently cleared for release.

The battle between President Obama and the GOP-led Congress continues to rage in the president’s final months in office.

After a meeting of high-level Republican Senators Tuesday, South Carolina Senator Lindsey Graham said the GOP consensus will not allow confirmation hearings on any nominee President Obama makes to fill the now-vacant seat on the U.S. Supreme Court.

And Senate Majority Leader Mitch McConnell made it clear today that Congress will not support a major component of another of Obama priorities before the end of his term: closing the detention center at Guantanamo Bay. FSRN’s Nell Abram has more on the plan the president put forth today to close the facility.

President Barack Obama sent a four-part plan to Congress Tuesday aimed at finally shuttering the U.S. detention center at Guantanamo Bay. There are currently 91 detainees housed at the controversial facility in Cuba, 35 of them have already been cleared for release. Noting that neither he nor Vice President Joe Biden are currently running for office, the president said the administration is now finally able to move on closing the facility.

“If, as a nation, we don’t deal with this now, when will we deal with it? Are we going to let this linger on for another 15 years, another 20 years, and another 30 years?” posited Obama. “If we don’t do what’s required now, I think future generations are going to look back and ask why we failed to act when the right course, the right side of history, and of justice, and our best American traditions was clear.”

The proposal to close the long-controversial detention center is four-fold. First, it calls for the transfer of those detainees already cleared for release to other countries with adequate security. It increases the frequency of hearings to review detainees for possible transfer and recommends changes to the military commissions process for those who are not eligible for release. And finally, the plan calls for the transfer of all remaining detainees to secure locations within the United States.

“As Congress has imposed restrictions that currently prevent the transfer of detainees to the United States, we recognize that this is going to be a challenge,” said Obama in his Tuesday address. “And we’re going to keep making the case to Congress that we can do this is a responsible and secure way, taking into account the lessons and great record of our maximum-security prisons.”

But before the president even addressed the nation, the partisan rancor on Capitol Hill was clear. Speaking on the Senate floor early Tuesday morning, Majority Leader Mitch McConnell called Obama’s plan to close Gitmo an “ill-considered crusade.”

“Congress acted over and over and over again, in a bipartisan way, to reject the president’s desire to transfer dangerous terrorists to communities inside the U.S. The president signed all those prohibitions, and his attorney general confirmed that it is illegal. Illegal for the president to transfer any of these terrorists into the United States,” McConnell said. “So we’ll review the president’s plan, but since it includes bringing dangerous terrorists to facilities in U.S. communities, he should know the bipartisan will of the congress has already been expressed against that proposal.”

President Obama’s move to close Gitmo isn’t new, he’s been promising to do so for at least seven years. Omar Shakir is a Bertha Justice Fellow at the Center for Constitutional Rights. He specializes in legal issues related to Guantanamo, and says the plan Obama put forth today is just a retread of steps long proposed and well within the president’s authority to implement.

“One of the core elements of President Obama’s plan – to transfer a number of detainees to a maximum security prison in the United States for indefinite detention without charge – does not represent a closure of Guantanamo, but merely moving it to another zip code. The infamy of Guantanamo has never been its physical location, but rather an entrenching a system of indefinite detention without charge,” Shakir explains. “And that proposal will not in any meaningful sense end the core injustice that Guantanamo has represented.”

While relocating detainees to federal prisons in the U.S. may afford them a different set of legal rights, it remains unclear what limits Congress may place on those rights. But Shakir says it won’t really change the circumstances under which they’re held.

“You’re going to have men who have been held for 15 years without charge finally getting on a plane to leave Guantanamo, but instead of returning to their loved ones, or to their homes, they’re going to be sent to a maximum security prison in the United States where they will continue to be held indefinitely without charge,” Shakir points out. “So even if they might have some additional rights, the reality is we face a situation given the pace of the courts in this country where the litigation will take many, many more years at which point these men will continue to lose years of their life subject to a system that will substantively not be any different than what they faced in Guantanamo.”

It’s unclear what comes next for Obama’s plan. As the election nears, the climate on Capitol Hill is not one of conversation. The White House hasn’t officially ruled out unilateral action, and Obama did say he would use “all legal tools” at his disposal to relocate the remaining detainees.