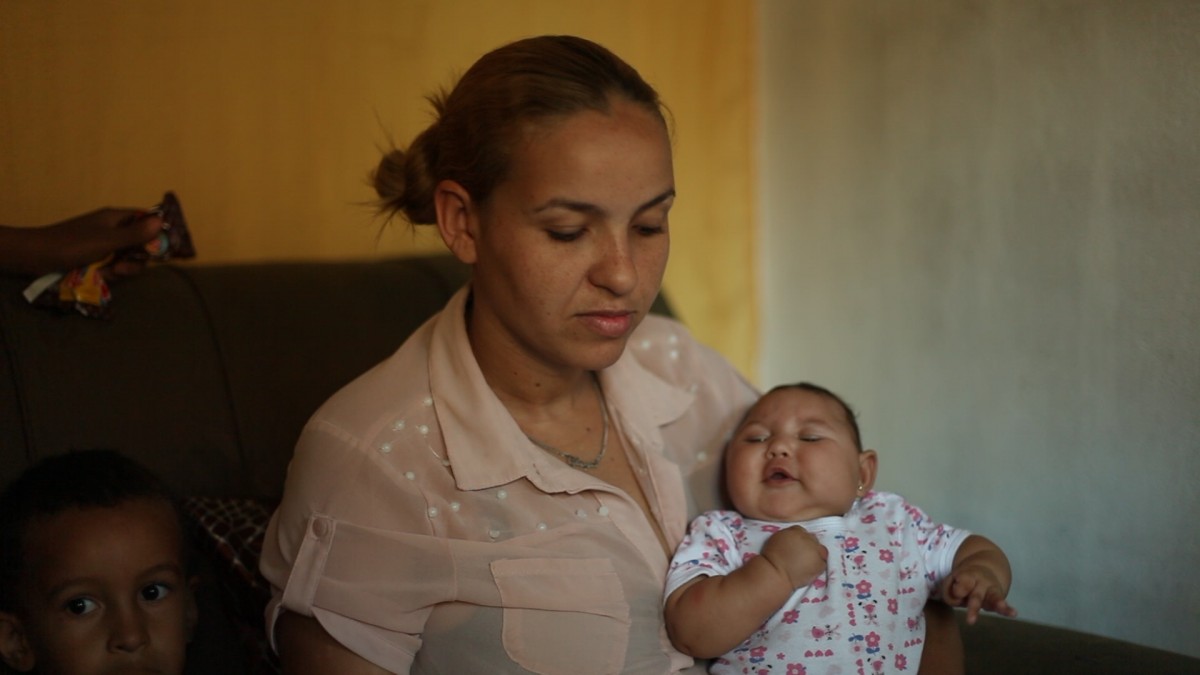 A mother with her microcephaly-affected child. (Photo credit: Sam Cowie)

A research team from the U.S. Center for Disease Control arrived in Brazil Monday to begin a case-control study to find out if the Zika virus really is the cause of a spike in brain malformations in infants. Eight teams of epidemiologists will collect and compare blood samples from affected mothers and children with peers who have escaped unscathed. They hope to capture specific evidence of causal factors for the birth defects – whether Zika, other infections or possible environmental factors.

The World Health Organization recently declared the spread of the mosquito-borne virus a “Public Health Emergency of International Concern,” due to the cluster of microcephaly and other neurological disorders in newborn babies in the region.

While much about the virus and its implications for pregnant women remains unknown, experts and commentators alike say it’s having a disproportional impact on the poor. From Recife, Sam Cowie reports.

So far, more than 1.5 million cases of Zika have been detected in Brazil, with the overwhelming majority occurring in the poorer North Eastern states of Pernambuco, Bahia and Paraiba.

Brazil is investigating more than 4,300 suspected cases of microcephaly, and more than 460 have been confirmed. Of those, 41 have tested positive for the Zika virus.

Jailson Correia is Secretary of Health for the city of Recife, ground zero for the epidemic. He says Brazil’s current economic crisis is making it harder to contain the virus. He adds the city requested around $7.5 million in emergency funding from the federal government and received just $334,000.

Nonetheless, he says health officials will do their best with the available resources.

“The Zika virus is pretty serious. We are facing probably the most important public health challenge in the recent history of Brazil,” Correia explains. “And it has global potential in every area of circulating Aedes aegypti, the mosquito, so yes, we are facing this as one of the major problems we have faced thus far in our history.”

The true scale of the crisis remains unknown. And even the link between Zika and microcephaly, while strongly suspected and supported by a growing body of evidence, has yet to be conclusively proven.

Since the start of the outbreak, some alternative theories have emerged, blaming factors like genetically engineered mosquitoes, insecticides in public water supplies, and even vaccines administered to pregnant women for the sudden spike in microcephaly. But such theories have gained more traction online than on the ground in Brazil. Most medical professionals here believe Zika is the culprit.

Still, experts say the uncertainty behind the neurological birth defects is the greatest challenge to tackling the epidemic. Part of the problem is the complexity and cost of the diagnostics, as the Zika virus usually lives in the body for only a week. The virus’ symptoms are minimal – mostly rashes and mild fever – and usually go unnoticed.

Angela Rocha is a pediatrician specializing in infectious diseases at Oswaldo Cruz hospital in Recife. She says that while so much about the Zika virus remains unknown, one certainty is that it can disproportionately affect the poor.

“This isn’t a condition that just affects poor people, a mosquito can bite anyone, but the condition certainly does favor poverty,” Rocha points out. “Why? Well in poor communities there is less attention given to trash which attracts mosquitos, less care taken with standing water – water that isn’t covered or protected. Therefore, the chances of contracting a mosquito borne virus are higher.”

The race is now on to develop a Zika vaccine, but even optimistic estimates indicate it will take at least until the end of the year.

Authorities in Brazil say the best way to combat Zika and other mosquito-borne viruses is to prevent breeding conditions like stagnant water from accumulating, and have stepped up efforts to educate the general public through flyering and public service announcements.

In Coqueiro, a poor neighborhood in Recife, members of Brazil’s armed forces go door to door checking for stale water supplies with health workers, who give out leaflets to residents advising them on how to avoid mosquito-borne viruses.

These soldiers destroy mosquito larvae, formed in rainwater that collected in a tire outside a home.

The World Health Organization also recommends that pregnant women in affected areas wear loose-fitting, light colored, long sleeved shirts and pants, especially during the afternoon hours when the mosquitos that carry the virus are most active.

Currently, abortion is only permitted in the case of rape and if the woman’s life is in danger. This also affects poorer women, as only middle and upper class women can access safe, illegal abortions via clandestine physician networks.

For women giving birth to babies with microcephaly or other neurological disorders, the long-term costs can be huge.

Baby Giovanna has microcephaly, the condition which causes babies to be born with smaller-than-average heads and suffer varying degrees of brain damage.

“My biggest fear is that she won’t be able to walk, won’t be able to talk, as the specialists have said,” Kelly says. “I’ve joined some groups where there were other mothers like me who are really scared, because lots of doctors said that a child like her might not even survive after being born.”

Experts say it is very likely that Giovanna will require full-time care for the rest of her life, putting enormous pressure on Gleyse, a mother of four who earns just $250 a month working as a toll booth attendant and receives $25 in government child benefits. Her husband is unemployed.

Two-hundred-and-twenty thousand soldiers have mobilized across Brazil to visit homes and advise civilians how to avoid mosquito-borne viruses and to destroy mosquito breeding sites.

The action will continue for the coming months with local health agents until Brazil’s winter arrives, when mosquitos that spread Zika and dengue are less able to breed.