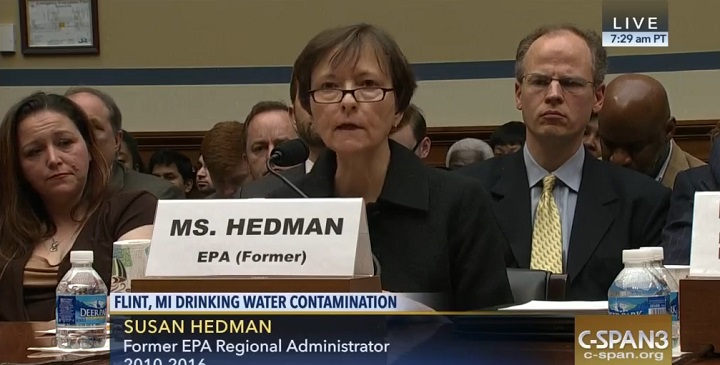 Lawmakers held the first of two Capitol Hill hearings set for this week on the Flint water crisis. For decades, Flint got its water from Lake Huron via Detroit. But in 2014, the city switched to sourcing its water from the polluted Flint River. That water, left without adequate additives to reduce lead leaching from deteriorating and cracked pipes, resulted in widespread lead poisoning of the city’s population. FSRN’s Nell Abram has more.

Congressional hearings into the Flint, Michigan water crisis continue this week. In a fiery session Tuesday, lawmakers took high-level decision makers during the Flint crisis to task, with incisive questions and scathing criticism from both sides of the aisle.

In a stunning display of finger-pointing and buck-passing, Hedman deferred all regulatory responsibility for the crisis onto the Michigan Department of Environmental Quality, or MDEQ, and denied any retaliation against the EPA scientist who raised a red flag.

For 50 years, Flint’s water came from Detroit’s supply. But in a bid to save money in 2014 the city, then under state-appointed emergency management, switched back to the Flint River. The law requires a corrosion study when changing the source of drinking water. According to Virginia Tech scientist Dr. Marc Edwards, the study was never done and Flint neglected to add chemicals that Detroit’s utility was using to prevent lead leaching.

“So had they done the minimum under the law,” explained Dr. Edwards, “adding the orthophosphates to the Flint River water, which had been done for 50 year under Detroit, the vast majority of these problems including the leaking pipes, the legionella, the lead would not have occurred.”

Edwards and his team of researchers got involved after EPA scientist Miguel Del Toral notified his supervisors of the elevated lead levels in the city’s water, to no avail. The nationally renowned water expert says the EPA’s inaction was negligence on EPA regional administrator Hedman’s part.

“The bottom line is she did nothing to get Flint’s children out of harm’s way and she has that obligation, she is the top policeman in the region,” Edwards told the House panel.

According to Hedman, in February of 2015 the EPA asked about the type of corrosion control in place, and was told that “Flint was fully optimized.”

“It wasn’t until April 24th that MDEQ admitted to my staff for the first time that Flint was not practicing corrosion control,” Hedman testified. “And from that time from that day forward at higher and higher levels, we repeated, emphatically and urgently told MDEQ that it was important to implement corrosion control as soon as possible.”

The EPA says its hands were tied by the Safe Drinking Water Act, which confers drinking water quality enforcement to the states.

Flint’s emergency manager in place at the time of the switch, Darnell Early, also testified. Mr. Early was the fourth of five emergency managers appointed by Michigan Governor Rick Snyder between 2011 and 2015. Early laid blame on his predecessors and the MDEQ. Committee co-Chair Elijah Cummings of Maryland was particularly incensed when Early testified that despite reports that new metal parts manufactured by the local General Motors factory were rusting after coming into contact with the Flint River water, he wasn’t alarmed.

“Wait a minute now, I’m confused,” Representative Cummings said. “If they going to rust out newly manufactured parts, you mean that doesn’t send you a warning that maybe human beings might be being harmed?”

“Well again, I was relying on the information I was getting from the MDEQ and from the staff,” Early replied. “I mean, I’m not a water expert.”

“You don’t have to be a water expert a five-year-old could figure that out!” Cummings came back, clearly angry.