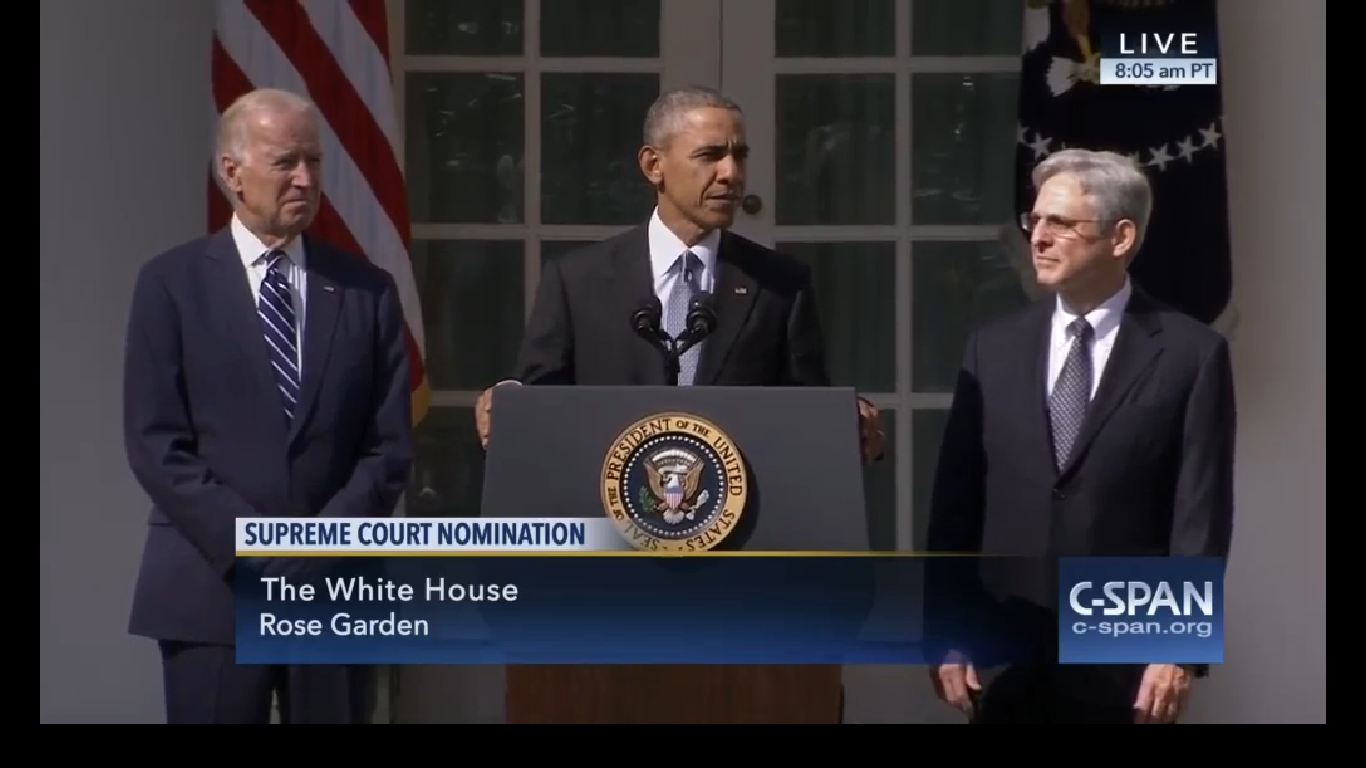 During a Tuesday White House Rose Garden ceremony, President Barack Obama announced his nominee to replace the late Supreme Court Justice Antonin Scalia. The nomination comes amid contentious partisan politics and gamesmanship regarding the timing of the vacancy. FSRN’s Nell Abram has more.

“I’ve selected a nominee who is not only widely recognized not only as one of America’s sharpest legal minds, but someone who brings to his work a spirit of decency, modesty, integrity, even-handedness and excellence,” Obama explained. “These qualities, and his long commitment to public service, have earned him the respect and admiration of leaders from both sides of the aisle.”

Judge Garland has a reputation as a moderate, leaning left on social issues but tough on crime and sentencing.

In 2003, he ruled that federal courts could not issue a writ of habeas corpus for Guantanamo Bay detainees, closing off their access to civilian courts. His resume includes serving as a clerk for Supreme Court Justice William Brennan. Just a few years after entering private practice, Garland gained partnership. But within months, he left his then lucrative job to join the Justice Department in the George H. W. Bush administration.

The Harvard law grad served as lead investigator and supervisor of the prosecution in the domestic terrorism case against Timothy McVeigh for the Oklahoma City bombing, in which at least 168 people died, 19 of them children. Confirmed with broad bipartisan support to the D.C. Circuit, Judge Garland served 19 years on the nation’s second highest court, becoming chief of the court in 2013.

Visibly moved at the Rose Garden announcement, the son of Eastern European immigrants called the nomination the greatest honor and gift of his life, aside from his marriage and the birth of his two children.

“Fidelity to the Constitution and the law has been the cornerstone of my professional life and is the hallmark of the kind of judge I have tried to be for the past 18 years,” Garland said. “If the Senate sees fit to confirm me to the position for which I have been nominated today, I promise to continue on that course. Mr. President, it’s a great privilege to be nominated by a fellow Chicagoan. I am grateful beyond words for the honor you have bestowed upon me.”

But it remains unclear if the Senate will even schedule a hearing for the high court nominee. Within hours of Justice Scalia’s death, GOP leaders vowed to block any nominee the outgoing president put forth. In announcing Judge Garland’s nomination, Obama said he was fulfilling his constitutional obligation and called on the Senate to do the same.

“At a time when our politics are so polarized, at a time when norms and customs of political rhetoric and courtesy and comedy are so often treated like they are disposable, this is precisely the time when we should play it straight and treat the process of appointing a Supreme Court Justice with the seriousness and care it deserves, because our Supreme Court really is unique. It’s supposed to be above politics, it has to be, and it should stay that way,” said Obama.

Judge Merrick Garland will start making the rounds on Capitol Hill Thursday to meet with Senators ahead of a two-week recess. What happens after that is anyone’s guess.