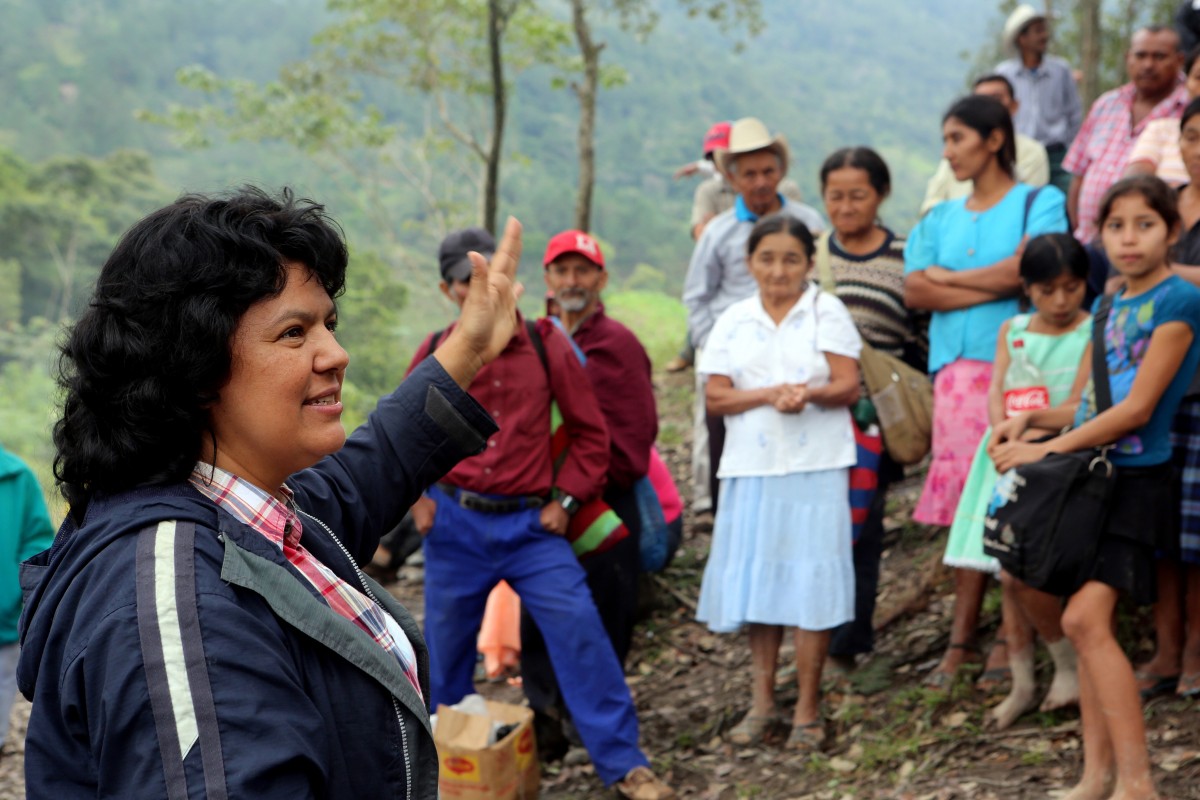 Berta Caceres in the Rio Blanco region of western Honduras where she, COPINH (the Council of Popular and Indigenous Organizations of Honduras) and the people of Rio Blanco have maintained a two year struggle to halt construction on the Agua Zarca Hydroelectric project. (Photo credit: Goldman Environmental Prize)

Honduras’ most internationally recognized activist, Berta Cáceres, was murdered in her home last night, stunning a nation  already struggling with one of the world’s highest homicide rates. But few think this murder was an act of random violence. Cáceres, a winner of the prestigious 2015 Goldman Environmental Award, had received multiple death threats throughout her lifetime of activism for indigenous land rights, gender equality and environmentalism. People from across Honduras are  traveling to Cáceres’ hometown of La Esperanza to pay their respects and condemn the crime that took the life of the well-known rights defender. FSRN’s Shannon Young spoke with Karen Spring, Honduras-based coordinator of the Honduras Solidarity Network.

Shannon Young: What’s the reaction in Honduras in the immediate aftermath of the murder of Berta Cáceres?

Karen Spring: So the reaction has been one of shock. A lot of the feelings and the shock are still sort of funneling in. People are absolutely devastated. Her family, Berta’s family, here in the city of La Esperanza in Western Honduras, as well as members of the Civil Council for Popular and Indigenous Organizations of Honduras, COPINH, the organization that Berta co-founded many years ago. And that’s for indigenous land rights and territorial defense here in Honduras. A lot of people knew that Berta was facing threats, she had threats against her life. She had protective measures granted to her by the Inter-American Commission on Human Rights. And so the fact that her life was under threat wasn’t something new, but the fact that they acted on it, and that the state of Honduras failed to protect her life, is quite shocking to people. And she will be greatly missed.

SY: Berta Cáceres is best known internationally for her leadership of a struggle against a World Bank-funded project to dam a river near the community of Rio Blanco. The Chinese company with the concession to build the dam pulled out of the area and the World Bank withdrew its financial backing. Can you explain the larger context of land rights, mining concessions and water privatization behind this struggle?

KS: Well, Berta Cáceres devoted her life to protecting natural resources, public spaces, land rights, rivers from the privatization process that’s underway and that gained speed after the 2009 military coup. And so she spent her life defending land and and basically supporting communities, mostly indigenous communities all over the country, but specifically focused on Lenca communities. Lenca is an indigenous group there in Honduras.

And so, the case of Rio Blanco, it’s been many years of struggle for one community named Rio Blanco, that COPINH and Berta have supported endlessly over the last couple of years as the community has said no to the construction of a dam on the Gualcarque River. And it was a huge struggle for Berta and for COPINH and the communities. They managed to gain small victories, as in the World Bank pulled out of the project, they stopped financing it, but it still moved forward. And, in February, the community carried out a peaceful action to basically show, to defend the river, the river Gualcarque, where they faced harassment, repression and threats once again from Honduran state authorities, private security guards and Honduran security forces. And so it’s been a long, ongoing struggle for her and she faced many threats because of that struggle.

I think it’s important to mention, too, is that although that has been one of the most, COPINH’s high profile struggles in the last couple of years, to focus just on that as to understand Berta’s work and her impact in Honduras is very limiting. Berta is someone that spent her entire life struggling, not just for Lenca indigenous people, but also for the Honduran social movement, women, for afro-indigenous peoples, for campesinos, and she was always one of the most outspoken activists. It is very clear that what she was and why she was doing it. And so, her killers and the Honduran state that failed to protect her, they’ve made a very strategic decision to take her life. She will be greatly missed, not only because of her role in the Rio Blanco struggle but in her incredible and important role in the country.

SY: There’s quite a bit of sound in the background. Can you explain where you are right now?

KS: I’m standing in the city of La Esperanza, it’s a very peaceful city. And I’m standing in the backyard of a local priest, and we’re at his house because one of the witnesses of the murder is inside the house and he’s being interviewed by the public prosecutors. And so the police are here as well. They’re offering protection, or so they say, to him because he was one of the witnesses of Berta Cáceres’ assassination late, late last night.

SY: What is known of the actual crime and what happened?

KS: It’s really difficult to sort of everything that’s happening because the dust hasn’t settled, but what is being understood by Berta’s family and by COPINH is that what happened was, approximately between 11 and 12 o’clock, really late last night, two individuals broke into Berta’s house and opened fire at her. She was hit by two bullets, but there were various bullet entry and exits in her body. And they escaped and they left, and that’s what’s known right now. She died, she didn’t die instantly, she was awake for a few minutes afterwards, but she passed away shortly afterwards. Her body is now being examined by a medical forensic doctor in Tegucigalpa and it will be returned here, where people from all over the country are on their way to La Esperanza to meet with her family, with her compañeros from COPINH. And all the people, they’re on the way to basically commemorate her life and celebrate her life and be here with the community of La Esperanza and her family in this really difficult moment.

SY: Environmental activism in Latin America has become especially deadly in recent years, particularly in resource-rich territories controlled by indigenous communities. What trends have emerged regarding the way land struggles are handled in Honduras?

KS: Often what happens is the state, especially with indigenous rights, the state of Honduras fails to, or doesn’t have the mechanisms in any way, to protect indigenous rights. Most of them are owned collectively. And so one community realized that the congress, the Honduran congress that’s controlled by a handful of ten to twelve families in the country and supported by the Canadian and the United States governments and international financial institutions. And when they realized that there are these big interests coming into these communities to build hydroelectric dams, to put in mining projects, to build tourist projects, communities are saying, ‘This is our land. We demand to be consulted and we won’t allow this project to move forward. We don’t get any benefit from this.’ And decades and decades of not receiving any benefit from the so-called economic development that’s happening in Honduras, and so as a result of their resistance they say face threats from interests of the companies that are behind these projects, as well as the Honduran government that has a lot of interest in pushing these projects forward and ignoring the interests of the indigenous populations.

SY: Cáceres received death threats repeatedly, but continued her work for indigenous land rights, gender equality and environmental activism. Throughout Latin America, environmental activists, human rights defenders, and even journalists are taught to do something known as “risk mapping” to connect the dots between their work and death threats. Did Berta Cáceres identify which actors she felt most threatened by, especially in recent days and weeks?

KS: Yeah, so in the last couple of weeks she sent out alerts about receiving threats from the industries and the company that’s building the dam in Rio Blanco [inaudible]. There was also an eviction in late February against the business community where they destroyed houses and violently evicted the community. Here in Intibucá, the department of Intibucá. It’s one of the reasons why she had enemies, because she’s clear about, she knew who her enemies were, she knew what she was up against, she knew what she was doing in terms of, you know, what the stakes were when she continued throughout her life to defend indigenous rights and land rights. And so she did, and COPINH put up statements in the last couple of weeks regarding the eviction and what was the repression in Rio Blanco. But, you know, once again she was such a strategically important person to the social movement because of her lifelong activism. But this was a very strategic decision to eliminate someone that had a long trajectory of really important work in human rights defense here in Honduras.

Karen Spring is a coordinator with the Honduras Solidarity Network. She spoke with Shannon Young by cell phone from La Esperanza, Honduras.