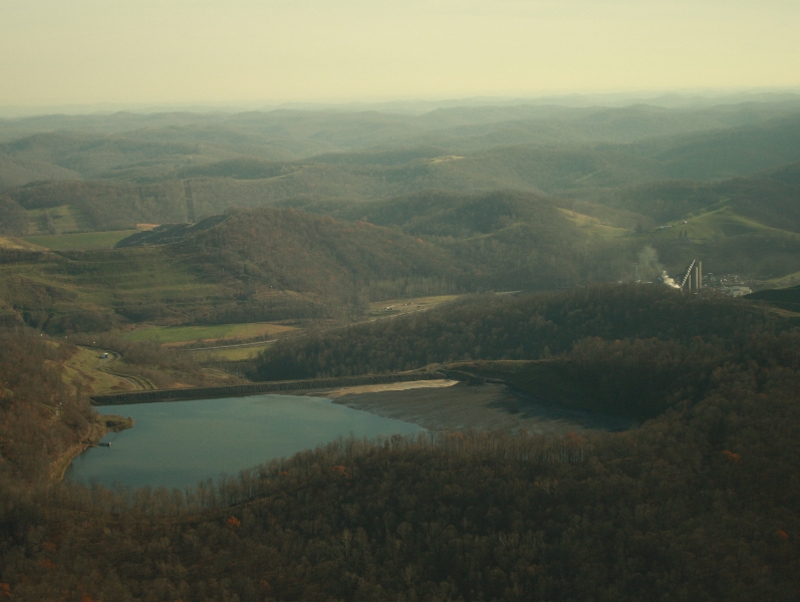 A report released earlier this month details the public health and environmental impacts from coal ash, where a spill in North Carolina in February sent 27 million gallons of toxic wastewater connected to a coal ash spill into a nearby river.

Another danger related to coal mining lurks high above residents who live in small towns and hollers in southern Appalachia coal country. Thousands of people live daily with the fear of a possible breach in coal slurry dams above their homes, where the waste from cleaning coal is stored. Two recent reports investigated the threats that exist, but some who would be most at risk are skeptical of the process. Melinda Tuhus reports from Charleston, West Virginia.

The mining, production and industrial use of coal creates a number of byproducts that can be hazardous to the envirnoment and human health. Byproducts like coal ash and slurry are often stored in pits, ponds and dams. And those containments aren’t always up to established safety standards. A recent study by the federal Office of Surface Mining, Reclamation and Enforcement, or OSM, showed an 80 percent failure rate of safety tests done on several coal slurry impoundments in southern Appalachia, where coal is king.

Following a coal slurry sludge spill in Martin County, Kentucky in 2000, the West Virginia Department of Environmental Protection and OSM jointly conducted a different study of 15 of the 132 impoundment dams in West Virginia. They were looking for weaknesses such as what occurred in Martin County, where the bottom of a coal sludge impoundment broke into an abandoned underground mine below, releasing 300 million gallons of sludge into local waterways.

Chris Holmes with OSM, says his agency examined the records that the West Virginia DEP requires all operators to provide. “They were not precise enough that we felt comfortable that slurry impoundments were placed far enough away from underground mine workings to ensure that any possible what are known as bathtub style breakthroughs might occur,” he told FSRN. “We did not find any imminent threat of any of those breakthroughs happening when we did this study. However, as a result of this study the state of West Virginia and OSM came to an agreement requiring coal mine operators to provide additional information for all of the 132 impoundments that are currently in operation in the state.”

Harold Ward, acting director for the Division of Mining and Reclamation at West Virginia’s DEP, says the agency carried out a follow-up evaluation last year to check to see if industry had implemented remediation plans. Ward adds that while some enforcement actions are pending, the permit holders are, “either in compliance or getting there.” Ward says the DEP is committed to enforcing the regulations as they’re written and to protecting the environment.

Critics like to say the DEP stands for “Don’t Expect Protection.”

Rob Goodwin, with the anti-mountaintop removal group Coal River Mountain Watch, says many West Virginians in coal country believe the DEP gives coal operators far too much latitude to police themselves. “You know we just see time and time again the culture is that if there is discretion in the law it should arc in favor of the coal industry and not in favor of the citizens,” he explains. “And we want that culture within the agency with those type of determinations to change.”

Joe Stanley agrees. As a coal preparation plant operator for 17 years, he fought to bring in a local of the United Mine Workers Union to give employees more protections. He worked with the slurry on a daily basis. He says it contains “everything from clays, chemicals – everything that’s in the mining process that gets washed off the coal before it’s put in the railroad car ends up in this slurry.” Stanley explains that some slurry is injected into underground mining complexes, “but the majority of the slurry ends up in what we call coal slurry impoundments.”

Several small towns are nestled under the Brushy Fork impoundment, which activists note is bigger than the Hoover Dam.

“The one that sat above Marsh Fork Elementary School, which is right by where I live now, is 8.2 billion gallons of slurry,” says Ricki Draper, an anti-mountaintop removal activist. “It sat above this elementary school for so long until the campaign won and moved that school. But it’s still over communities. It’s terrifying; no one knows what to do with that slurry.”

According to the DEP, Brushy Fork holds 6.7 billion gallons of slurry. It is many orders of magnitude larger than the Buffalo Creek slurry dam, which burst in 1972 and sent 132 million gallons of sludge barreling into coal settlements in a hollow in Logan County, W.V. killing 125 residents. The coal company that operated the dam called the disaster “an act of God.”

Impoundments are built from unstable materials called coal refuse, including slate, which, under more heat and pressure becomes coal. Coal companies are supposed to follow the requirements of their construction permits, but Joe Stanley says they don’t always do so. He was instrumental in convincing the Office of Surface Mining to test the safety of the compaction process used to build the impoundments. “They did these unannounced at seven different impoundments, and out of the 73 tests that they did, only 16 met minimum standards,” says the former coal plant worker.

Those numbers are known because the executive summary of the report was leaked a year ago. But, despite the efforts of journalists and activist groups who have filed Freedom of Information Act requests for the raw data, OSM has not released it, saying the final report is still under review.