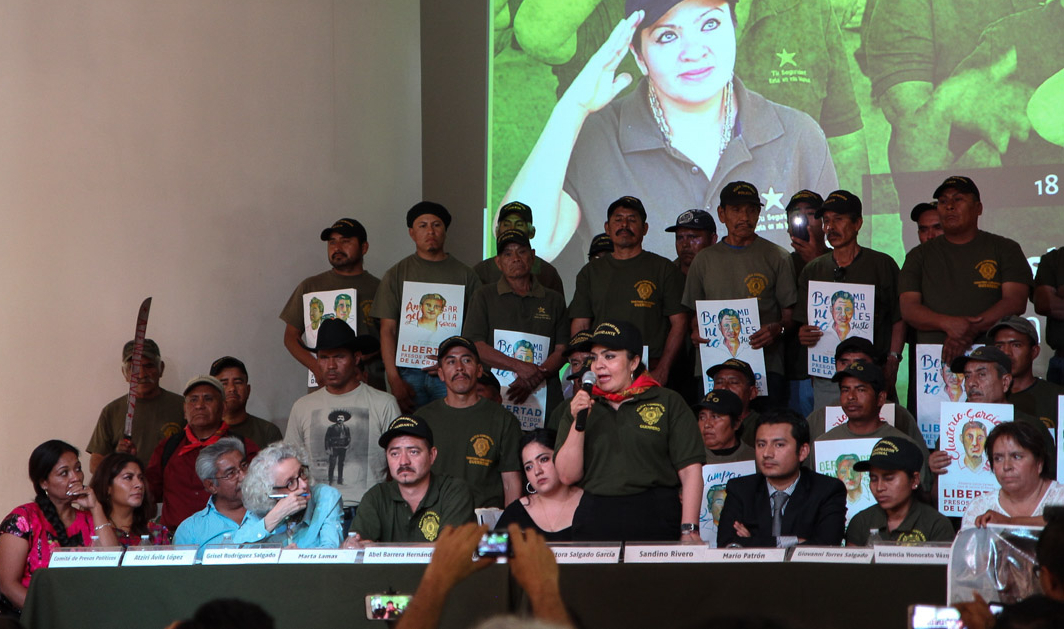 Dressed in her police uniform and flanked by supporters, Nestora Salgado addressed the press hours after her release on March 18, 2016. (Photo credit: Andalusia Knoll)

An indigenous Mexican-American woman who has become the face of armed community self-defense efforts in the Mexican state of Guerrero was released from prison on Friday, after being held for two-and-a-half years on charges that were ultimately ruled baseless. Nestora Salgado co-founded and led a community police force to combat increasing violence in her hometown of Olinalá, Guerrero. Human rights groups on both side of the border celebrated her release as long overdue. Andalusia Knoll has more from Mexico City.

Surrounded by activists, former political prisoners and members of her community police force, Nestora Salgado spoke to a packed press conference in Mexico City, just hours after her release.

In the two-and-a-half years she spent behind bars, Salgado’s case drew international attention and became emblematic of what rights groups say is a government-backed crackdown on armed, citizen-led efforts to defend their communities against organized crime and corrupt officials.

Salgado, a Mexican-American dual national, co-founded and commanded a community police force in her hometown of Olinalá, Guerrero until soldiers and navy personnel arrested her on a slew of charges, including kidnapping and organized crime, in August of 2013.

“It is horrible that I had to pay for a crime that I did not commit, just for wanting to defend my people, my community, humble people, because I am of the people,” Salgado said at the Friday press conference. “I am the voice of the people, I am the voice of those who don’t have a voice, I am the face of those who don’t have a face, those who no one sees, those are who prisoners and no one knows that they are prisoners.”

Salgado’s arrest came in the context of a wave of detentions targeting other community police leaders in Guerrero affiliated with an organization known as the Regional Coordinator of Community Authorities, or the CRAC. The CRAC, founded in 1995, spearheaded a civil rights struggle in Guerrero that ultimately led to the legal recognition of the rights of indigenous communities in the state to administer their own law enforcement and criminal justice systems.

Abel Barrera, director of the Tlachinollan Human Rights Center says Salgado’s release is a positive step in a larger fight against endemic impunity in Mexico.

“This serves as an example to show – first – that the peoples’ defenders are not criminals even though the government portrays them as such. And second, that there is a legal framework that protects us and recognizes us as indigenous rights defenders. In Guerrero that framework is state law 701,” Barrera explains. “Nestora was never a kidnapper nor an assassin, she was just a representative of the community assembly of the CRAC.”

Salgado says she intended to return to the U.S., where most of her immediate family lives, to receive treatment for pre-existing health problems that developed complications during her incarceration. However, she maintained that she would return to Olinalá, Guerrero to continue her community police work, despite the risks.

Salgado also used the media spotlight on her release to call for the release of nine other members of the CRAC community police who remain in prison on similar charges.