Mexican authorities have exhumed the body of Ayotzinapa student Julio Cesar Mondragón. The move comes after months of pressure from his family and per recommendations from a group of experts affiliated with the Inter-American Commission on Human Rights that authorities permit an independent autopsy. Experts from the Argentine Forensic Anthropology Team will perform the autopsy at the request of the family.

The body of the 22-year-old student was found along a dirt road in the Mexican city of Iguala, Guerrero on the morning of September 27, 2014,  after the abduction of 43 of his classmates. The body was left without facial skin, eyes or ears and bearing other signs of apparent torture. The official autopsy concluded that area fauna were responsible for the state in which his body was left, despite the fact that no tooth or beak marks were found. The relatives who identified him in the morgue say Mondragón was clearly tortured and murdered.

When the federal government concluded its initial investigation into the fate of the missing students, announcing that all had been killed and incinerated in an open air dump, no mention was made of Julio Cesar Mondragón nor explanation given about the state in which his body was found.

On Saturday in Mexico City, Mondragón’s family and supporters marched from the the Three Cultures Plaza, site of the 1968 Tlatelolco student massacre, to the Government Forensic Institute. Outside of the government building, students and activists created an enormous altar with Julio Cesar’s face as part of the cultural act “Julio Soy Tu Rostro” or “Julio, I am your face.”

FSRN’s Andalusia Knoll was there and files this photo essay.

Click any thumbnail image to launch slideshow with captions. 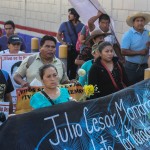 Family members of Julio Cesar Mondragón and relatives of the 43 disappeared Ayotzinapa students led the march as it snaked through residential neighborhoods on its way to the Mexican government’s central forensics institute. 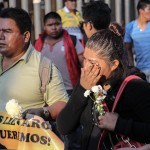 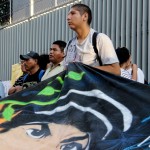 Freshmen from the new class of the Ayotzinapa teachers’ college watch as musicians perform songs for Julio Cesar Mondragón. 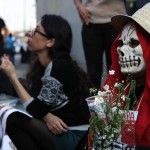 Participants holding candles created a solemn mood during the march and cultural event held in memory of Julio Cesar Mondragón. 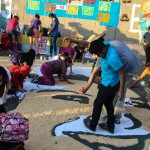 “Julio Cesar, I am your face.” Supporters create a Day of the Dead style “tapete” painting with sand, sawdust and powdered vegetable-based dyes so that he can be remembered as the young smiling student that he was rather than the disfigured murder victim shown in photos hat went viral online when his body was found. 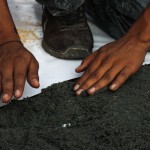 In a symbolic act outside of the federal forensics institute building, students reconstructed Julio Cesar’s face with painted sawdust which is traditionally used in Day of the Dead altars. 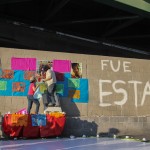 Activists build a Day of the Dead altar in front of the government’s forensics institute to honor the three Ayotzinapa students who were murdered in Iguala on September 26th, 2014. The altar is accompanied by graffiti saying “Fue el estado” or “it was the state”, a phrase that has been a rallying cry in the struggle for justice in this case.