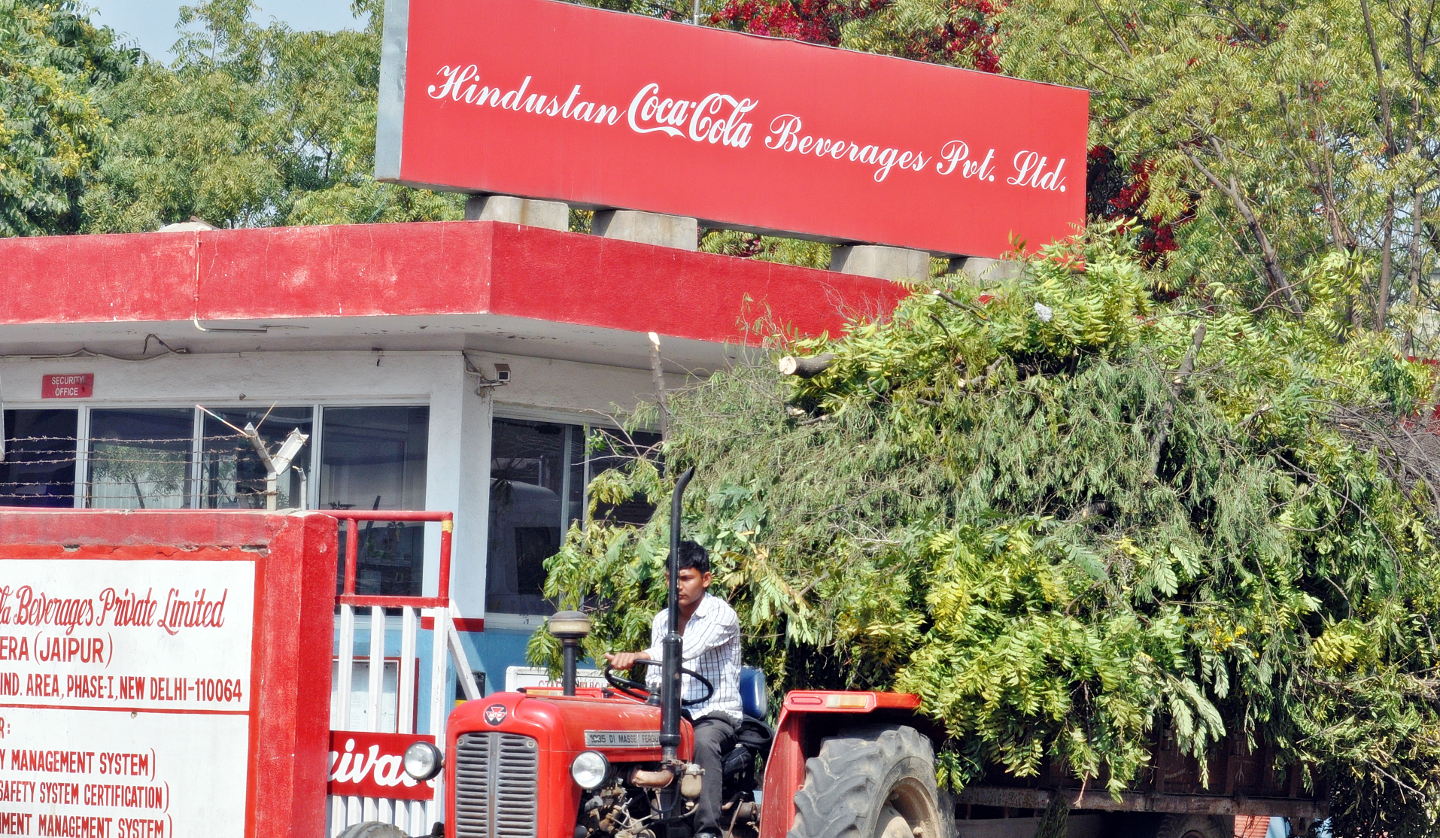 In India, the soft drink giant Coca-Cola has decided to suspend bottling operations at three units located in three different states of the country. One of these units, in the city of Kaladera in the western Indian state of Rajasthan, has been the target of a years-long community-led campaign that blames the company for exacerbating water shortages in the area. Coca-Cola says the plant closure is due to long term economic non-viability. FSRN’s Jasvinder Sehgal reports from Kaladera.

When the Coca-Cola Company announced plans last month to shut down its bottling plant here in Kaladera, many local residents took it as good news.

Water shortages were already a reality here when the company set up shop in 2000. Area farmers say Coca-Cola’s operations made the situation worse and some farmers organized a campaign demanding closure of the plant.

Seventy-two-year-old agronomist Rameshwar Kudi helped lead the campaign: “Coca-Cola was extracting groundwater through 50 horsepower motors while the local farmers were allowed to use only five-horsepower motors,” Kudi explains. “Being a multinational company, they had electricity 24 hours a day while the local farmers only had access to five hours of electricity. Today, even major farms lack groundwater.”

In 2008, as the result of a student-led campaign at the University of Michigan, Coca-Cola agreed to pay for an assessment of its bottling plants in India.

Kudi says that The Energy and Resources Institute (TERI), which conducted the study, recommended that Coca-Cola specifically shut down its plant in Kaladera.

“The TERI study clearly suggested that the Coca-Cola should use its own water and should properly recharge the groundwater. It should use rainwater or water coming from sources like water harvesting, but it’s not doing either,” points out Kudi. “As it is using the same water supply as farmers, it should shift its operations to a place with abundant water.”

The competition over scarce water resources has also forced some multi-generational farmers out of agriculture and into factory jobs.

“When I was very young there was no scarcity of water. There was no water shortage even in the dry summer months,” recalls 62-year-old Chetar Lal, who used to grow vegetables on his three-acre farm, but now works in a local factory. “But today, the water is almost gone. Groundwater levels have plummeted ever since Coca-Cola began operations. The mining of groundwater in a water scarce area has aggravated the water shortages for us. Today, we don’t have enough water to drink.”

As the once-dominant profession of farming waned in Kaladera, the Coca-Cola plant became a source of steady employment for hundreds of area locals.

Lalchand, who gave only his first name, worked in the bottling plant for 15 years. He lost his job in an early wave of layoffs before the plant transitioned to a storage facility for its inventory. He has now opened a shoe repair shop in front of the closed facility.

“I started working here in 2001. The company closed its operation all of a sudden without giving any prior notice or information. We’ve been unemployed for almost three months now,” says Lalchand. “So I opened this cobbler shop because I know how to repair shoes, but many of my colleagues don’t know any other craft. They come here every day hoping that that Coca-Cola will resume bottling and give us jobs again.”

Coca-Cola attributes its decision to close the Kaladera facility to economic issues. But allegations of water mismanagement dog Coca-Cola across India and have forced the closure of their bottling plant in Kerala in 2005 and Varanasi in August 2014.

The government of the southern state of Tamilnadu withdrew Coca-Cola’s land allocation for a new bottling plant due to large scale community protests in April last year.

The company is also currently the subject of a court ordered investigation as to whether its second largest plant in India has been illegally discharging untreated wastewater.

Kaladera-based water campaigner Mahesh Yogi says the closure of the local plant is a good start, but that Coca-Cola and its investors should be held responsible for the area’s depleted watershed and financially-devastated farmers.

“This is only the start of our fight. This is not a win. We will struggle until Coca-Cola repays all the financial loss to the farmers in form of compensation,” says Yogi. “I cannot tell you about our future strategy as being a multinational giant; Coca-Cola can go to any extent to curb our demands. It took us 13 years to get this far; we don’t want to struggle that much again in order to get compensation.”

Rapidly dropping groundwater levels have made many residents of water-scarce regions decide that access to fresh water is more precious than the luxury of carbonated drinks.