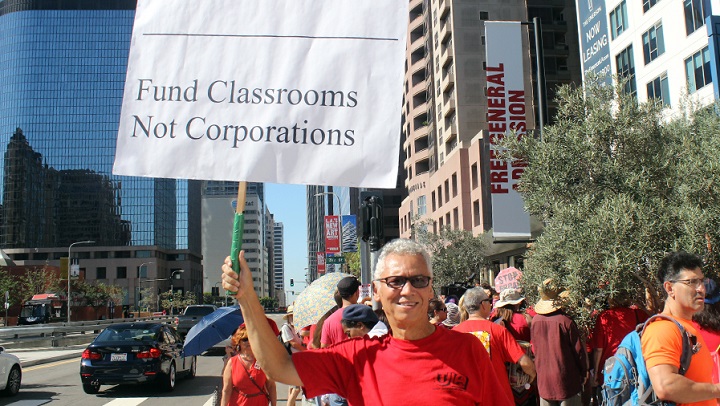 An elementary school in Los Angeles is now at the center of a power struggle between the city’s school district and parents who say they want more influence in the quality of their children’s education. A majority of parents of students at LA’s 20th Street Elementary School attempted to spark action from the school board through a relatively new mechanism known as “the parent trigger.” The school board rejected the parents’ petition over the weekend, challenging the underpinnings of a state law that has led to the “charterization” of two of the city’s public schools since 2013.

This comes as the district’s union of public school teachers is gearing up for a larger fight against measures that could turn even more of the city’s public schools into charters. Los Angeles already has the largest number of charter schools of any school district in the country. FSRN’s Lena Nozizwe reports that many are wary about how much philanthropic billionaires are influencing the educational agenda.

In February, they pulled what’s known as “the parent trigger.”

“What’s commonly called ‘the parent trigger’ is actually The Parent Empowerment Act a 2010 law that exists in California,” explains Seth Litt, Executive Director of Parent Revolution, a non-profit organization that helped draft the language for the Parent Empowerment Act. “What this law does is it gives families whose children are trapped in persistently low performing schools the ability to come together and organize and demand and force change.”

Litt says 20th Street Elementary school has long suffered from low performance, with recent testing indicating that only 1 in 5 of the students performed at grade level for math and reading. At last count, more than 95 percent of the school’s students are Hispanic, most of the rest are African-American.

“They have been changing the principal very often,” says Beatriz Corral, whose seven year-old daughter attends 20th Street Elementary. “In three years, four years we have three principals in the school already and nothing has happened. Everything is still the same with every principal,” Corral explains. “For me, I don’t want to point the finger at anybody, but for me it could be the teachers.”

Parent Revolution has worked with families like Corral’s for two years, since parents first wanted overthrow the leadership at the elementary school, but they backed off when administrators promised to make changes. Litt says the parents gave the district plenty of opportunity to do so.

“This time what they really said was we gave the district a shot to do right by our children. They did not take our children’s future seriously. We want someone else to come in and manage this school. We want to transform our school into a high performing charter school,” says Litt.

For years, the LA teachers union (UTLA) has protested the growth of privately operated but publicly-funded charter schools. More recently, they’ve pushed back against billionaire Eli Broad, who’s been promoting charter school expansion, at one point even calling for transforming about half of the district’s schools into charters.

But Litt says the teachers union has put forth a lot of misinformation about Parent Revolution.

“UTLA just put something out saying that we are a Broad-funded organization. We have not received money from the Broad Foundation in two years. They are not a current funder,” explains Litt.

According to Litt, one of their current major donors prefers to be anonymous. The Walton Family Foundation also funds Parent Revolution. Started by the founders of Wal-Mart, the foundation reports that overall it has invested more than $1.3 billion in public education, including supporting more than a quarter of the nation’s 6,700 charter schools.

And Los Angeles has been a big recipient. LAUSD has more charter schools than any school district in the country. Parents like Beatriz Corral think that’s a good idea.

But public school supporter and parent Karen Wolfe says billionaires like Broad should not determine the direction of public education.

“He should be supporting what professional educators and education policy makers decide is the best thing for our public schools,” Wolfe says.

In an effort to fight back, members of the UTLA recently voted to raise their dues by nearly 30 percent, to about $1,000 per year.

“Our members understand that we’ve got to invest in a long term movement for public schools, for quality programs for educational justice, for music, the arts, all sorts of things in schools,” says UTLA President Alex Caputo-Pearl. “And of course we don’t want unregulated schools or privatized schools to be a part of that because we don’t think it serves the public, but our members understand that.”

Caputo-Pearl says the higher dues are line with other school districts, but teachers at charter schools are rarely unionized.

The former public and charter school principal says if the public schools were making the grade there wouldn’t be such a thirst for charters. But union leader Caputo-Pearl says if billionaires really want to help education, they shouldn’t undermine public schools.