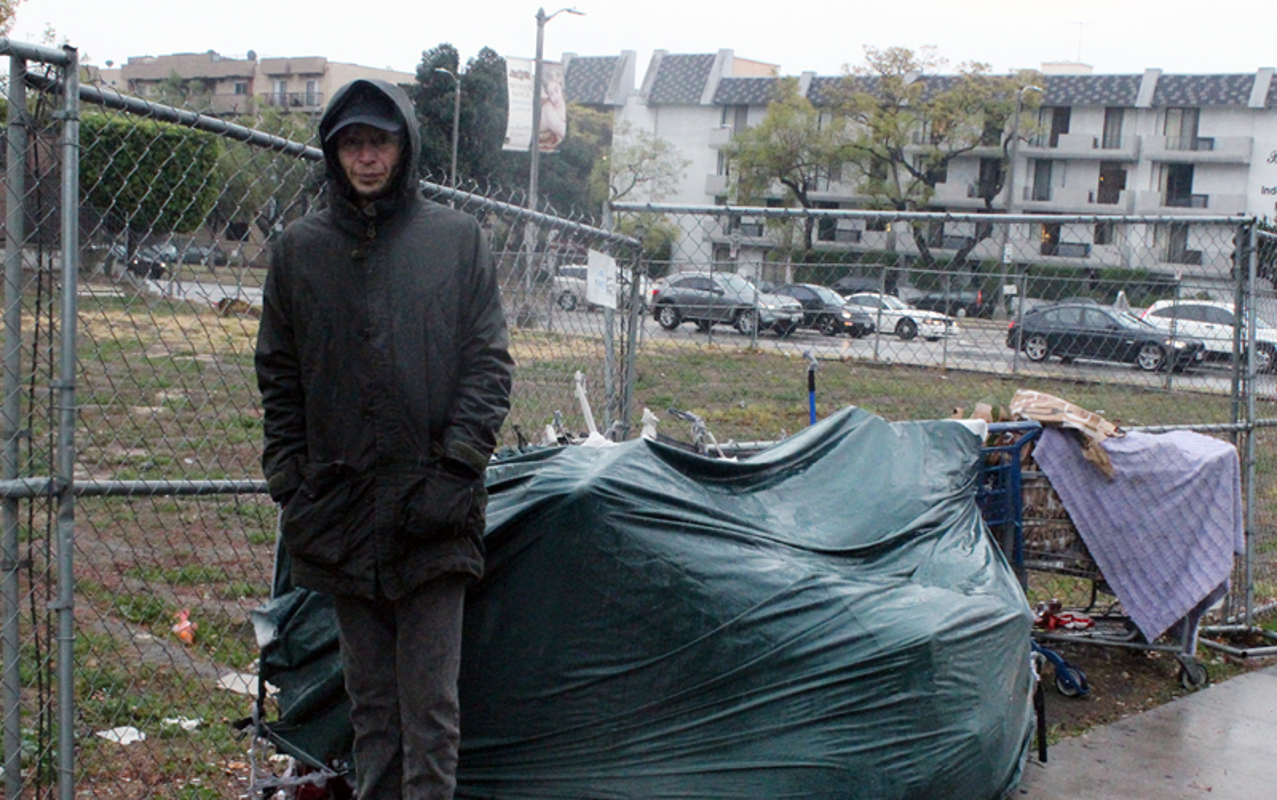 Anthony, 46 years old, stands next to his belongings and makeshift shelter on the edge of Beverly Hills, California. (Copyright: Lena Nozizwe)

The arrival of El Niño-fueled storms in Los Angeles, California this new year has been punctuated by power outages, flooding and mudslides. And this is just the beginning of a series of storms in the forecast that meteorologists expect will be more severe than normal. While the weather conditions are creating major problems for commuters and homeowners, FSRN’s Lena Nozizwe reports that thousands of homeless residents of LA, are being left out in the rain and cold.

“We found this tarp, we didn’t have this at first. All we had was trash bags to cover up our shopping carts to stay dry with,” says Anthony. For the past month-and-a-half, a three-dimensional collage that includes a tarp, trash bags and shopping carts all parked on the edge of Beverly Hills, California has been home for the 46-year-old and a friend.

“It is leaking right now and we’re getting wet,” Anthony says. “We’re going to get sick and that really sucks.”

And it’s going to get wetter. Heavy rains are expected to wallop Southern California, thanks to the strongest El Niño since 1997.

The National Weather Service says the area may get more than six inches of rain by Friday.

And because of El Niño, above average rainfall is forecast for the next three months. The El Niño effect occurs when above average water temperatures pool along the equator and southeastern Pacific coasts, causing a cascading effect on global weather patterns.

No one will feel the brunt of the storms more than some 44,000 LA residents who are homeless. Anthony would love to get into a shelter, but he says it’s not that easy, even with additional beds currently available at emergency facilities.

“For the older adults, we hate life because we’re not in the age range where we can get shelter,” explains Anthony. “They are more concerned about the kids more than anything else, which is understandable.”

Heather Carmichael is the executive director of My Friend’s Place, a private nonprofit based in Hollywood that helps runaways and homeless young people between the ages of 12 and 25. As she stands in the storehouse for donations, she points out all the items that will provide a measure of harbor during the bad weather.

“So here to your left you will see the beginnings of ponchos for the wet weather, and then strewn about we have sleeping bags. We have an amazing community member that worked with his community to ensure we had 250 sleeping bags to give out this winter,” Carmichael points out. “Those will go out by, I would say, in the next couple of weeks the 250 will be gone.”

My Friend’s Place will also supply blankets and tarps.

Nineteen-year-old Kime goes by the street name of Paris. Tarps and sleeping bags have helped her weather countless storms: “It gets really, really cold out here. I could say I’ve been cold so many times that I learned how to stay warm now. Like I got a couple of sleeping bags and I take them across the street to the church to go wash them.”

Even with special winter shelters and increased community support, My Friend’s Place Executive Director Carmichael says there are only about 1,200 public beds available for the 6,000 young runaways and homeless residents of Los Angeles County.

The Los Angeles Homeless Services Authority reports that in the last two years the number of homeless encampments, which can mean anything from vehicles that double as homes to tents, has jumped by 85 percent to more than 9,500.

Whether under a freeway bridge or in a makeshift tent, Anthony says he has lived all over Los Angeles.

The city has established a $12.4 million emergency relief fund to help LA’s homeless population cope with the deluge. The majority of the money is earmarked for rent subsidies for the homeless, including veterans. What’s left will only add about 400 emergency shelter beds.

And two California legislators have proposed a $2 billion initiative to tackle homelessness in the state. But for now, as what may be historic El Niño rains begin, in Los Angeles many of the homeless population of all ages will be turned away from shelter from the storm.