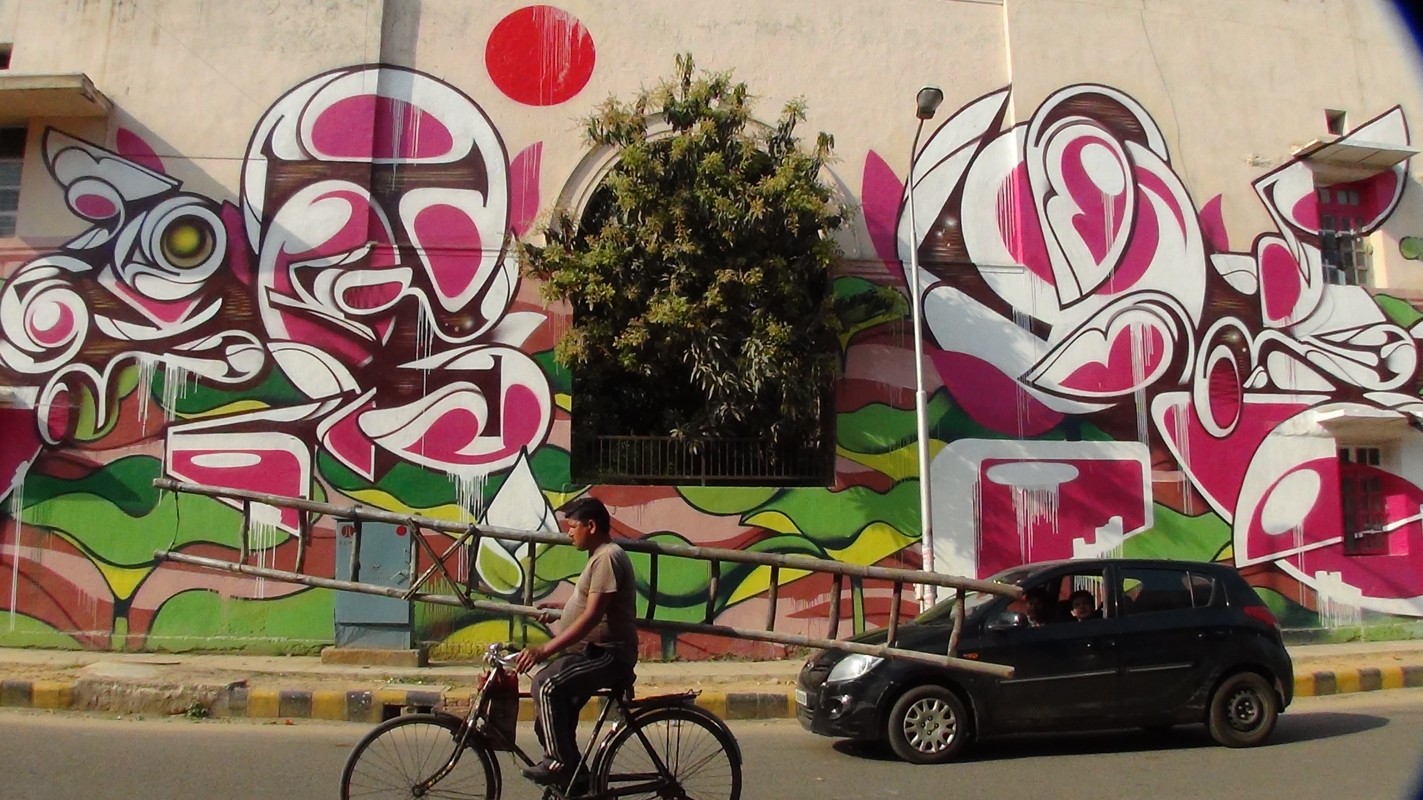 India’s capital, New Delhi, is getting a makeover with dozens of local and international street artists setting out on a mission to transform the city’s landscape. With a view to making art accessible to everyone, the artists are using Delhi’s footpaths and walls along with transportation containers as a platform for the expression of their imagination. Bismillah Geelani spent some time with the artists at work and reports how art works are being used to impart social and political messages besides enhancing public spaces.

The Inland Container Depot on the outskirts of Delhi is Asia’s largest dry port. Usually buzzing with honks and squeals of moving vehicles, the surroundings these days are much calmer. Since early February, the port has been turned into a venue for the Delhi Street Art Festival and dozens of artists are at work amid a backdrop of live music and dance performances.

“Ours is a not-for-profit group and through these festivals we are trying to take art works out of the conventional galleries and enclosed spaces to make it available to a wider audience,” explains Akshat Naureyal,co-founder of the Start India Foundation, the group organizing the festival. “In India, enjoying art works is thought to be an activity for the elite or people from the upper middle class. What we are trying to do is to democratize art and make it accessible to everyone.”

This year’s Delhi Street Art Festival is the fourth of its kind. This time organizers made shipping containers the primary canvas.

French artist Sowat sees it as a homecoming for street art: “Graffiti was born on trains. It was always the idea of having roaming museums, painting your work somewhere and having it travel throughout the city or throughout the country.

“So that’s why I think it’s the most exciting part of it, who knows where the container is going to end up, who knows who is going to see it?” wonders Sowat. “That’s why I think it’s even bigger than street art because those containers are going to travel through the country and they are not going to be seen only by people in the urban spaces, I hope they are going to be seen by people who live in the country side as well.”

Street art has had to fight a certain stigma in many countries, with aerosol paintings in public spaces not receiving the same level of respect as visual art in other mediums – like oil paintings on canvas. Street artists in many countries face fines or criminal penalties. But events like the Delhi street art festival are helping to shift perspectives of the public and even of the art establishment.

“Delhi being what it is, has been a center of the international art with lots of museums and art galleries,” veteran art critic Abhilash Khandekar says. The writer for one of India’s leading newspapers continues, impressed. “But this is something really very good, containers being used as art walls is really new and different, this is a wonderful exposure for me. I’m amazed and very happy to be here.

Some of the art works that stand out include a massive mural of an astronaut staring into space, an Indian goddess riding a dragon, and a wall painted with the word “Breathe” using a special black ink made from particular matter and carbon, emphasizing the urgent need for clean air in the world’s most polluted city.

Local artist Harsh Raman has used a vibrant pallet of colors to create a mural of what he describes as the god of street art.

But Gaia, a street artist and muralist from the United States, is more concerned with global warming.

“What you have here is the Alto Maruti Suzuki car in repeat and they are superimposed over half of a gigantic globe. And then you have the portrait of a man called Malcom Mclean, and he is credited with innovating the container and bringing it to a level where it could in fact be standardized and utilized by all sorts of shipping companies beyond sea land.”

With his painting of one of India’s top selling cars, Gaia tries to bring attention to the role of urban living in exacerbating the problem of global warming.

“We are seeing the advent of mega-city and so as you have this sort of pooling of labor from the countryside into the city and the exploitation of the traditional lifestyle that creates a tendency or a need or a desire to also have the other comforts and conveniences,” Gaia says, illustrating his point, “access to medication, access to clean water but of course also access to cars, your own vehicle and your own spacial autonomy.”

Among other works, a portrait of the late Iranian poet and activist Farough Farukhzad by Iranian artist Nafir, signifies the importance of the struggle for women’s rights in conservative societies.

Within the context of the festival, organizers have joined hands with the local government to convert a residential area in Delhi into what is being called the country’s first art district. Magnificent wall murals with local and international artists exploring a wide range of styles and themes are transforming the capital’s historically and architecturally significant Lodhi colony into an open air art gallery.

The organizers hope the initiative will create a greater demand for street art in the country and broaden career options for budding young artists.