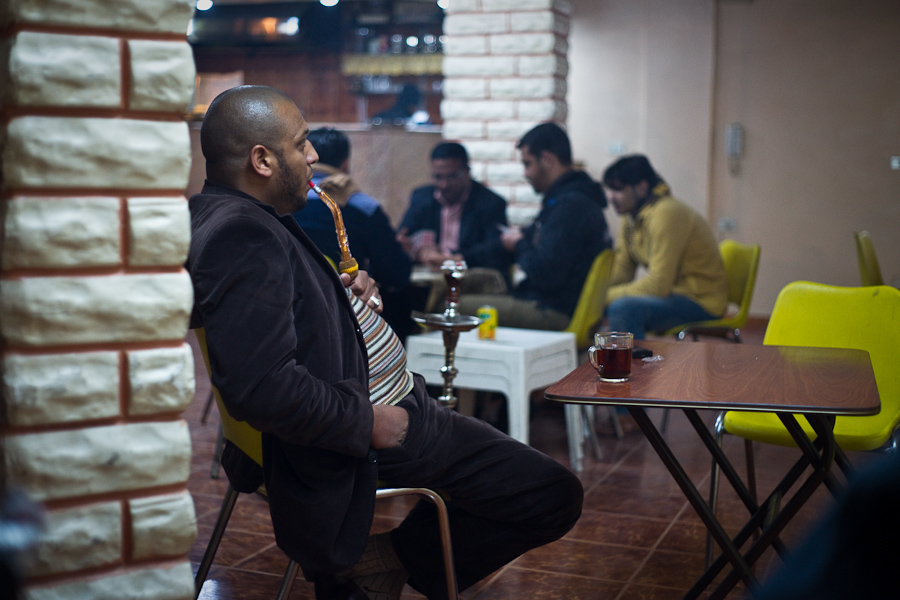 A shisha cafe, like the one where Arab migrants gather in Brussels. (Photo Credit: Wojtek Ogrodowczyk via Flickr Creative Commons)

United Nations Secretary General Ban Ki Moon today called on countries to resettle nearly half a million Syrian refugees — so far places have been found for only about  185,000.  His remarks came at a one-day summit hosted by the UN’s refugee agency, attended by representatives from more than 90 countries. The vast majority of Syrian refugees needing placement are currently in countries immediately surrounding Syrian borders.

But opponents of resettlement have latched onto the attacks by Muslim extremists in Brussels and Paris to argue against allowing Syrians into some European countries. Further complicating the issue are tensions within communities of refugees and among other recent immigrants. Tom Carstensen has more.

Patrons in this shisha café in the Belgian city of Mechelen smoke Arab water pipes like they do back home. The owner of the café is an Armenian-Syrian from the minority Christian population in the war torn country. He doesn’t want his name or the café’s name, made public, as he’s afraid of sectarian retaliation.

He migrated to Belgium ten years ago. His friend Narek has only been here about a year. Narek is not his real name, he uses a pseudonym because he’s afraid of Islamists finding him in Belgium, and there are plenty here.

Narek sought to leave behind the violence perpetrated by members of various warring factions. Now he’s worried about Europe’s future – due to sectarianism imported from the Middle East with the massive influx of asylum seekers and migrants. Until recently he has been living in refugee centers, and is unnerved by talk he’s overheard between Islamists there.

“Too many, there were not hiding that they are very much supporters of Jabat Al Nusra,” Narek explains.

Jabat Al Nusra is Al Qaeda’s armed wing in the Syrian Civil war and is one of the groups that is not party to the current tenuous ceasefire.

“How do they know if this person is from ISIS or that one is from Jabat al Nusra, or from any other?” asks Narek.

Even with the pending plan between the EU and Turkey to shut down migration routes and vet refugees before admitting them to the EU, Narek says Europe has no idea who they’re letting in.

The conflicts moving along with migrant populations as they flee war and violence are certainly not limited to Belgium. With Turkey’s recent offer to take back all migrants who cross its border into the EU, the already complicated dynamics there are sure to grow.

The decades-long sectarian conflict between Kurds and Turks continues, and has flared up recently.

And the Kurd-Turk tension extends beyond the country’s borders. In September of last year in central Stockholm, police came under attack during a clash between the two groups.

And as the refugee crisis expands, more and more people are thrown together in refugee centers. Across the region there have been numerous reports of attacks against Christian asylum seekers housed in these facilities.

In a bid to address the ongoing attacks, several German states have segregated Christians and Muslims into separate detention centers.

Lise Poulsen Galal, from Roskilde University in Denmark, has studied anti-Islamic sentiments among Christian refugees from Iraq. She says that when the first influx of Iraqis came to Denmark in the 80s there were never any issues between Muslims and Christians in the asylum centers. But that’s has changed.

But Gala says it’s not just the radical Islamists who incite the violence.

There’s a risk for this becoming more frequent because they are coming from sectarian conflicts. The religious differences are used in the wars,” points out Galal. “We saw it here as well during the Balkan wars where Bosnian Muslims coming here then had conflicts with Serbs already here.”

And there have been attacks in Denmark. Bagok has Kurdish background but has lived in Denmark his whole life. He was at recent rally in a predominately Muslim neighborhood of Copenhagen when violence broke out. The event was held in support of rebuilding efforts in the Kurdish town Kobane. Bagok says pro-Kurdish demonstrators came under attack.

They shouted that IS are not the terrorists, the Kurds are,” Bagok recalls. “They shouted shouted ‘Allahu Akbar’ several times.”

As the influx of migrants continues untempered by Balkan border closures or EU-Turkey talks, these very real sectarian tensions will likely continue to spark across the region.