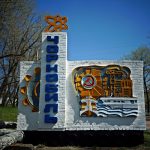 Chernobyl city limits. The village, which gave its name to the atomic power plant, is located 10 miles south of the decommissioned nuclear power station. 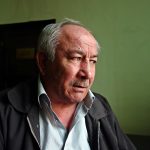 Nail Mardagalimov is head of the Kramatorsk Civil Association for the Remembrance of Chernobyl. Some 1000 men from Kramatorsk were sent to the Chernobyl Exclusion Zone as part of the clean-up operation, also known as liquidators. Nail said: “We then gave all our strength and health for the sake of saving the country. Now we are on our own.” 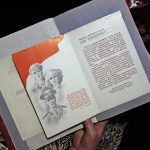 Liquidators were awarded documents like these issued by the Central Committee of the Communist Youth of Ukraine. An estimated 600,000 to 800,000 liquidators helped in the clean-up operation. Exposed to radiation, many thousands are now facing health issues. 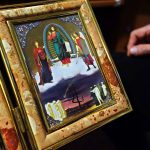 The Chernobyl Savior icon. It depicts Jesus Christ the savior in heaven, flanked by the Mother of God and the Archangel Michael. Below Christ is the sight of despair caused by the Chernobyl disaster and those who died of radiation. Blessed by Christ are white-robed figures such as nuclear plant workers and medical staff as well as military personnel who sacrificed their lives to contain the fall-out of the explosion and evacuate the population. 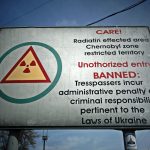 Due to radiation fallout the Chernobyl Exclusion Zone was set up. All towns and villages located within a 20-mile radius of the Chernobyl nuclear plant were evacuated. The zone covers an area of 1,600 square miles and is one of the most contaminated in the world. Weather and wind conditions at the time meant radiation fallout was uneven with various hot spots peppered in the exclusion zone. 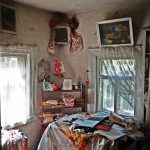 The biggest village in the exclusion zone was Zalysia with a population of 3500. Due to high levels of radiation caused by cesium-137, strontium-90 and plutonium, people were evacuated in 1986 and 1987. Some of the villagers found integration in urban Soviet society difficult. Those who couldn’t, mostly around a 1000 senior citizens, returned to the exclusion zone and were called “self-settlers.”.The last Zalysia “self-settler” died in December, 2015. 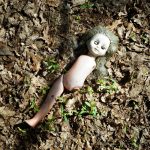 A doll lies on the ground at the abandoned Kopachi kindergarten. The village remains heavily contaminated by radiation where weathered toys have remained under the sky for the past 30 years. On the night of the 26th of April, 1986 the explosion contaminated the soil and water with radiation equivalent to 20 times of the Hiroshima and Nagasaki bombings combined. 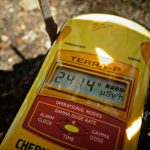 2.5 miles south of the Chernobyl power plant lies the village of Kopachi. Radiation fallout here was so acute that Soviet authorities decided to destroy and bury all wooden housing. In some areas of the village, Geiger counters reach over 24 mSv. For comparison a chest x-ray is 0.10 mSv. 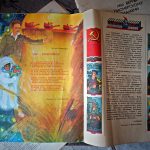 Soviet youth pioneer literature still lies strewn on the floor of the abandoned Kopachi kindergarten. As one of the few brick buildings left remaining the village it still remains contaminated with cesium-137, strontium-90 and plutonium. 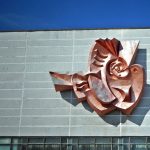 An abstract dove with an atom in its beak adorns a wall of the Chernobyl power plant. It was meant as a symbolic metaphor for the peaceful use of atomic energy. The atomic power station was built 1.5 miles from Pripyat, a city with a population of nearly 50.000. 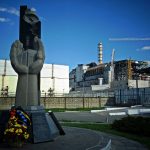 The “Memorial to the Lost Workers of Chernobyl.” Thirty-one people died from acute radiation sickness in the first three months and many more over the following years. Fire and rescue workers had little awareness of the dangers posed by radiation exposure. 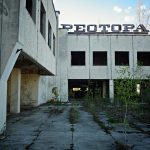 The standard of life in Pripyat was one of the highest in the Soviet Union. People had unparalleled access to consumer goods and foreign imports. Where once a restaurant stood, now stands an empty shell. 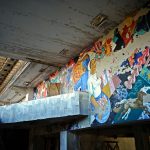 A weathered and peeling Soviet mural of a peasant worker and scientist in the Pripyat Energetika cultural center. Also known as a Palace of Culture, such centers were central fixtures in many Soviet towns or cities. The Pripyat center included a library, theater, cinema, art facilities, dancing and meeting halls for the Soviet youth. 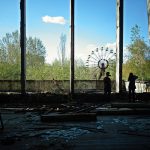 From an abandoned building, a distant view of the iconic Ferris Wheel. The Pripyat amusement park was ready to open its doors for the 1st of May festivities. It is now abandoned, rusting and reclaimed by nature. 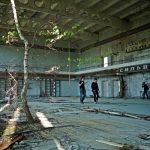 In one of the sports recreation centers, a tree grows from the wooden floor board. Such facilities were once home to one of the best Soviet volleyball teams. Renowned Soviet athletes would often visit Pripyat’s sporting centers. 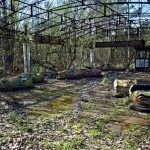 Rusting bumper cars and a moss covered floor in the remains of the Pripyat amusement park. 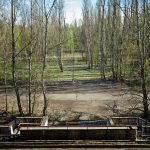 At the Pripyat sport stadium, locals had access to a running track and a soccer field. From the main stand, the patch of grass directly ahead is the soccer field, overgrown with trees during the past 30 years. 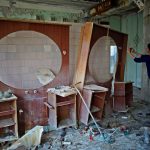 What remains of a beauty parlor in one of the more exclusive shopping centers in Pripyat. 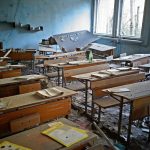 School Number 3, one of 5 secondary schools in Pripyat. About one-third of Pripyat’s population was under 18; that’s some 17.000. The city had 15 primary schools, five secondary schools and a technical college. Frozen in time a sign reads: “October-ists are Lenin’s grandchildren.” 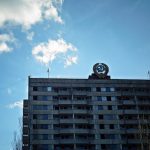 The Soviet hammer and sickle crest remains poised atop an abandoned 16-floor apartment block. Today Pripyat is a ghost town and its streets reclaimed by nature. 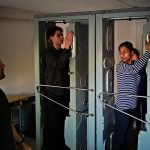 Prior to leaving the Chernobyl Exclusion Zone, all visitors are checked for radiation levels. Should the levels exceed a certain limit, decontamination of clothing is required.