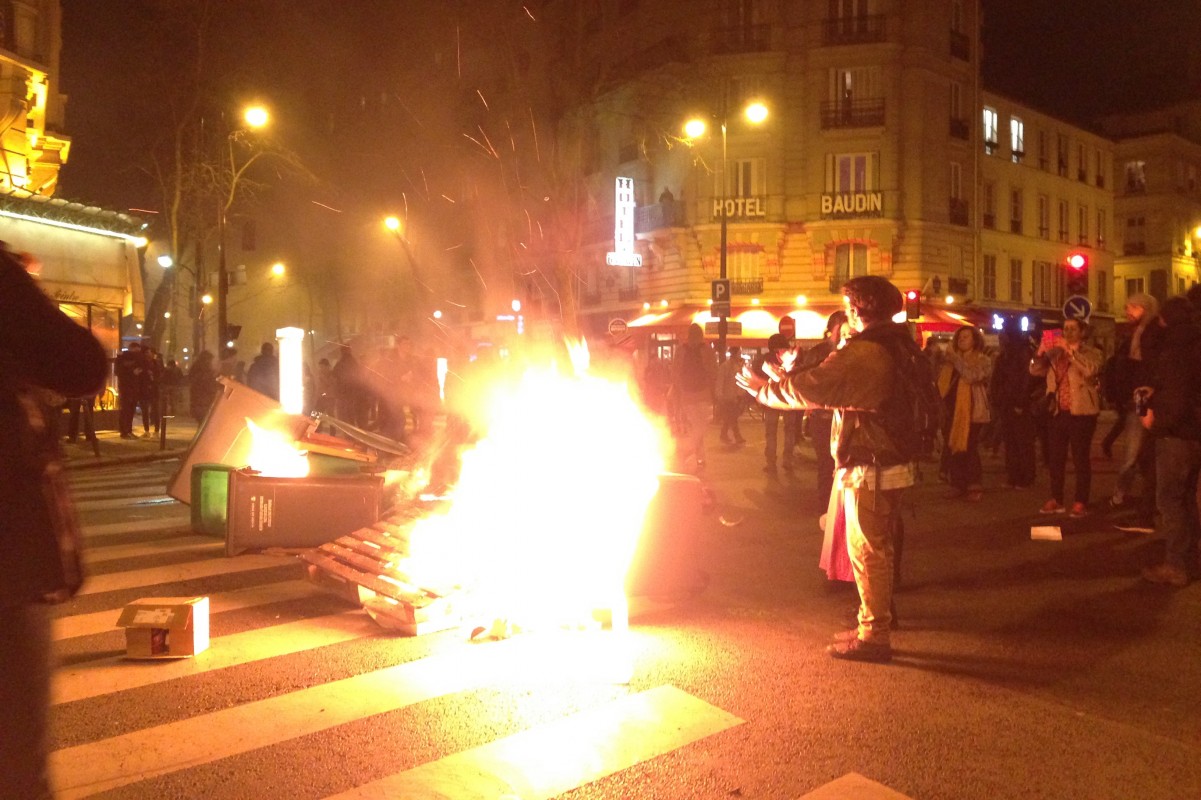 Protestors light garbage cans on fire at an intersection after being tear gassed.

After more than a week of an Occupy-style gathering called Nuit Debout, or “Rise Up At Night,” Paris police cleared the Place de la République Monday morning. The movement began March 31 as a protest against the French government’s controversial deregulation of labor laws and has quickly become a focal point for a wide range of causes largely inspired by Occupy Wall Street, Arab revolutions and the Spanish Indignados.

Nuit Debout protesters say they will re-occupy Place de la République tonight, where general assemblies have been held for the past 12 nights running. Today is what organizers call “The 42nd of March” in what some hope could be a French spring. Raphaël Krafft reports.

Saturday night, some 500 hundred protesters chanted “Paris, wake up! Rise up!” as they left the Place de la République, calling for all to meet for an apéritif at Prime Minister Manuel Valls’ apartment. The prime minister, who was in Algeria at the time, lives just walking distance away from the Place de la Bastille, another symbolic square, this time of the country’s revolution.

But what started as a peaceful, happy and spontaneous demonstration more than a week ago turned violent late Saturday night. Police used tear gas and stun grenades on protesters as they neared near Prime Minister Valls apartment. At least eight people were arrested.

Protesters stoned a police station, banks and shops were targeted symbols, too. A car was set on fire.

Officials had granted demonstrators a permit to stay in the Place de la République through Sunday night; they evacuated the square early Monday morning.

In the country martyred by terrorist attacks in November and still under a state of emergency, thousands of people had gathered throughout the weekend to attend the general assembly and participate in a commission among the many,  providing an infrastructure for the movement. They collectively supplied food, logistics, and communications, held workshops and provided security, which they call serenity. Some people just stopped by to take a look at what was going on here.

Sara Benoist, is a 29-year-old English linguistic teacher. She says in Nuit Debout she finds a sense of relief.

“Yeah, it is a gathering because you can just come here alone and meet people and just sit down with them and talk – talk about politics, talk about society,” explains Benoist. “Yeah, is is a gathering, it’s a spontaneous gathering of people who are willing to change things.”

Nuit Debout started with a social documentary movie “Merci Patron!” – or “Thanks Boss!” – by François Ruffin, a journalist who writes for the Fakir free speech newspaper. The movie was screened at the Place de la République on March 31, following a demonstration against proposed changes to the country’s labor laws.

“Nothing special about this movie, but just the fact that it was a social movement movie and people were really emotionated about that,” says Pierre, who does not give his last name, one of the Nuit Debout organizers. “And we were saying, ‘Okay, there’s a big strike going on the labor law and we didn’t want that to be the same old story of a typical French strike from point A to point B and then we come home and do the same story again,’ because it’s always the same trade unionists talking to the same politician.”

And they stayed overnight. Pierre says the Labor law was just the straw that broke the camel’s back.

“What we wanted was just to be together and start to talk. And during the first three days, we almost never talked about the labor law and all the problems that we have. We just talked about the real situation,” recalls Pierre. “We went through a difficult collective process in France, because we had the terrorist attacks and then we have the terror law. We have the feeling, all of us, that French society is paralyzed due to that. And then there’s the unemployment problem. So when we gathered, we needed to just join and talk and now we are slowly back to ‘Okay, what are we doing with this movement?’”

Pierre still doesn’t know. The movement has now reached what they call ”March 42nd” and spread to nearly 60 French cities.

After days of wariness about this new horizontal and collective form of struggle, critics have risen. The right-wing Le Figaro newspaper wrote: “Nuit Debout is an homogeneous bunch of tortured, leftist, bohemian bourgeois, the real suffering youth is unseen there.” Left wing trade unions support the movement, but are cautious with the more inclusive, less-single issue form of struggle that’s unfamiliar to them.

Marissa, a former member of Occupy Wall Street who prefers to use her first name only points out the limits of the current movement.

“If you can create a democratic, egalitarian organization out of the square that actually connects to the society at large, so that you really occupy everywhere, then you have the possibility for a revolutionary situation to exist,” says Marissa.

After the evacuation Monday morning, authorities granted organisers another six days to occupy Place de la République, as the socialist government is not willing to be heavy-handed on the burgeoning movement. But Pierre Aidenbaum, the socialist party mayor of the third district of Paris, doesn’t seem inclined to let Nuit Debout remain here indefinitely.

“Order should prevail on Place de la République. It is a popular place, a place for each and everyone,” says Aidenbaum. “Today, Parisians cannot have access to this place.”

And Nuit Debout seems to be affecting change already. Shortly after police cleared the square, Prime Minister Valls announced new subsidies for young graduates looking for a job and other financial aid for apprentices and students.

What comes next for the still loosely-knit Nuit Debout movement remains to be seen.