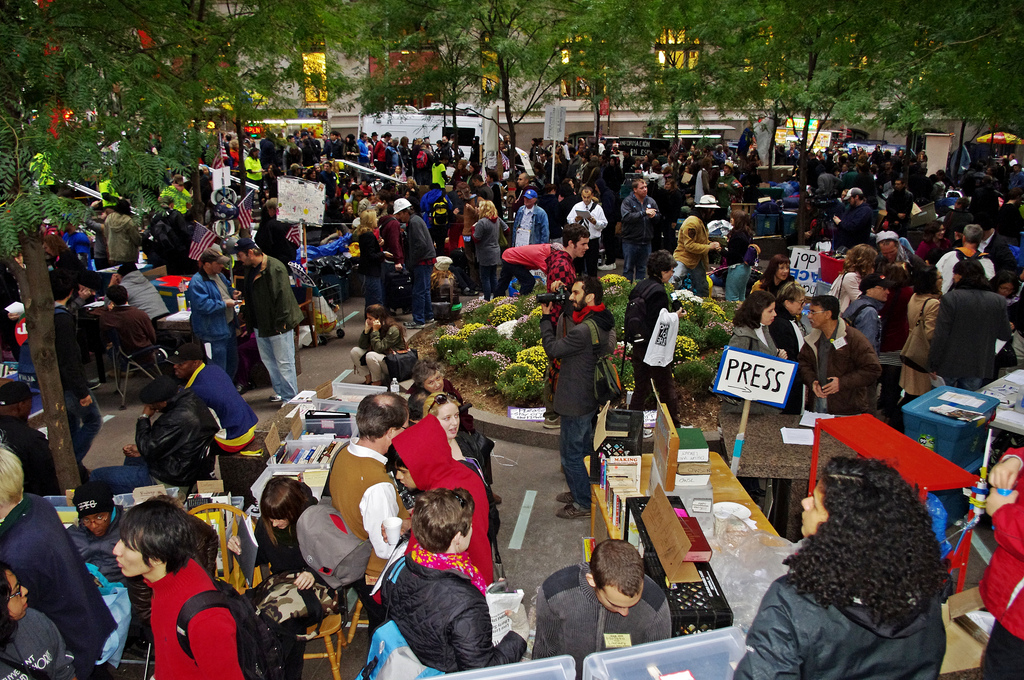 A call to action, and protests quickly spread

It all started with a blog post last July by the anti-consumerist magazine, AdBusters calling for “20,000 people (to) flood into lower Manhattan, set up tents, kitchens, (and) peaceful barricades and occupy Wall Street.” Inspired by uprisings in the Middle East and North Africa and emboldened by the occupation of the Wisconsin State Capitol, the call to action spread and on September 17th, the Occupy movement was born. In less than a month, protests and encampments multiplied. On October 15, hundreds of demonstrations took place around the world: in Madrid, Paris, and London. In Seoul, Santiago and Porto Alegre. In New York, Chicago, Tampa, Denver, Los Angeles, Seattle and many other towns and cities.

The 99 percent  – a reference to the concentration of wealth among the richest one percent of Americans  – became a slogan for a movement that was just beginning to take shape.

In a short period of time, the Occupy movement changed public discourse and put a spotlight on income inequality and corporate and political corruption. Occupy chapters demonstrated that other models were possible, using general assemblies and consensus decision-making. Denied the use of amplifiers, activists popularized the participatory human mic, which quickly became a form of social protest at political speeches.

Not yet a year old, the movement is still young, but it’s already made a mark. Author, linguist and activist Noam Chomsky says inequality had been growing in the US for three decades. Then came Occupy.

“A spark took off and it’s the first significant, organized activist response to an assault on the population that’s being going on for thirty years.”

As the Occupy movement evolves, activists from across the country are gathering in Philadelphia today to plan for what’s next. It’s the first Occupy National Gathering and demonstrators are planning to create what they call a “blueprint for a democratic future.” FSRN’s Matthew Petrillo spoke to activists about what they hope to accomplish and the democratic principles they’ll use.

As encampments multiply, authorities use police action and legislation to crack down on dissent

As activists continue their activities for the next phase, they’ll also be considering the response from authorities. When the movement began, cities and police departments across the country violently suppressed many Occupy rallies and encampments. Some encampments were targeted in the middle of the night in carefully planned raids. Peaceful demonstrators were pepper sprayed at close range; activists were dragged through the street; and in one of the most visible assaults, Iraq war veteran Scott Olsen was shot in the head at close range with a projectile.

Video of the attack shows a chaotic scene of demonstrators trying to help a bleeding Olsen, whose skull was fractured. He recovered, but was in critical condition and couldn’t speak for more than two weeks. In addition to intimidation and physical violence against demonstrators, city leaders have used their own tactics, including passing laws restricting freedom of assembly and imposing so-called “stay away” orders, banning people from specific areas, like university campuses.

The attacks don’t stop with activists. Freedom of the Press in the United States dropped in international rankings this year, according to separate reports published by Freedom House and Reporters Without Borders. Both organizations cited arrests of journalists covering the Occupy movement as the reason for the decline. More than 80 professional and citizen journalists have been arrested while covering Occupy protests in cities across the country, since the movement started last Fall. FSRN’s Caroline Lewis brings us some of their stories.

Since its inception, the Occupy movement has targeted issues of inequality and the people affected by budget cuts, job losses, the mortgage crisis, tuition increases and education reform, and police brutality. All of these issues also disproportionately affect people of color. That’s why soon after Occupy’s launch, activists from communities of color encouraged members of their community to take part in the movement. FSRN’s Jaisal Noor brings us more on the influence of race and the role that people of color have played in Occupy Wall Street.

Since the start of the Occupy movement, Indigenous activists have pointed out that North America is already occupied land. Many wanted to see Occupy acknowledge that the language of occupation was exclusionary.  In response, some occupations chose to organize under different names, including Unsettle Portland and Unoccupy Albuquerque. Although attempts to change the name of Occupy Oakland to Decolonize Oakland were unsuccessful, a group has continued to meet and organize under that slogan.  Corrina Gould is a Chocenyo Karquin Ohlone activist in the San Francisco Bay Area, she spoke with FSRN’s George Lavender about the work that’s being done to “Decolonize Oakland.”

In Hawaii, long-running encampment draws on native law for protection of protest

July 4th is also the anniversary of the establishment of the illegal Republic of Hawaii in 1894, which replaced the Kingdom’s monarchy following a coup the previous year. For many native Hawaiians, the term Occupy has deep significance as they consider their island occupied for more than a century and some prefer to call their movement (de)Occupy instead. Activists also claim the longest, continuous encampment in Honolulu and that’s largely due to a special law, the Law of the Splintered Paddle.

Laulani Teale is an artist, activist and cultural practitioner. from Ko’olaupoko, O’ahu. She’s been involved in the Hawaiian movement for over 20 years, and currently works with the De-Occupy Honolulu encampment and other Occupy efforts to build bridges between indigenous efforts and the Occupy movement.

Anchor Outro: That was artist, musician, activist and cultural practitioner Laulani Teale. From Ko’olaupoko, O’ahu, Teale has been involved in the Hawaiian movement for more than two decades, and currently works with the De-Occupy Honolulu, which has carried out the longest known continuous encampment, 242-straight days.

FSRN’s Larry Geller recorded the interview with Laulani Teale in Honolulu. Thanks to blackline.tv for providing sound from their interview with flimmaker Hena Ashraf and to Makana, for sharing his song, We Are Many.

Today’s program was edited and produced by Catherine Komp.  Our technical production team at KPFA Berkeley is Rose Ketabchi and Jeannine Etter.